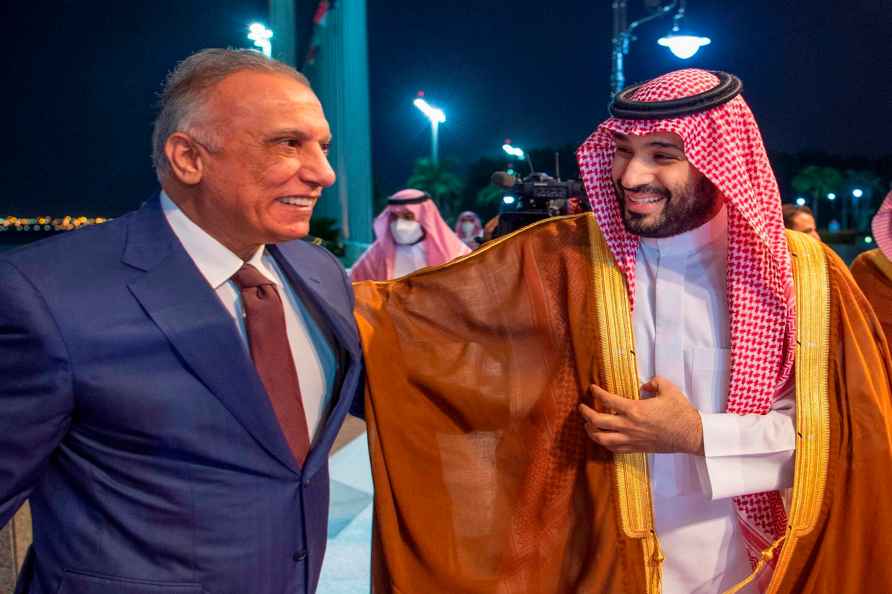 [In this photo released by the Saudi Royal Palace, Saudi Crown Prince Mohammed bin Salman, right, greets Iraqi Prime Minister Mustafa al-Kadhimi, upon his arrival at King Abdulaziz International Airport in Jiddah, Saudi Arabia, Saturday, June 25, 2022. ( /PTI] Baghdad, June 26 : Iraqi Prime Minister Mustafa al-Kadhimi is scheduled to pay an official visit in the upcoming days to Iran before heading to Saudi Arabia for talks with leaders of the two countries, an official news agency has reported. The state-run Iraqi News Agency (INA) quoted sources as saying that the two trips will take place within the framework of direct talks between Iran and Saudi Arabia that were held previously in Baghdad, Xinhua news agency reported. During his upcoming visits, al-Kadhimi would discuss several issues, including diplomatic relations between Iran and Saudi Arabia, according to INA. On June 16, Iraqi Foreign Minister Fuad Hussein said in a phone conversation with his Iranian counterpart Hossein Amir-Abdollahian that "Iraq is ready to continue facilitating direct talks between the Saudi and Iranian foreign ministers in Baghdad to restore relations to normal", according to a statement by the Iraqi Foreign Ministry. To improve bilateral relations and ease regional tension, Baghdad hosted four rounds of direct talks between Iran and Saudi Arabia last year, and the fifth round was held in April this year. In response to the attacks on Saudi diplomatic missions in Iran after the kingdom executed a Shiite cleric, Saudi Arabia cut diplomatic ties with Iran in early 2016. The two rivals' strained relations showed signs of improvement after they resumed direct talks on normalizing diplomatic relations in April 2021. /IANS

When you go for a walk in Delhi, look out for snatchers on the prowl

By Ujwal Jalali New Delhi, Aug 14 : "Let's go for a walk outside and see what we can see!" -- a famous children's fun song might not be suitable for the people of the national capital. The ri […]

Mumbai, Aug 14 : Bollywood choreographer-director Farah Khan, who is known for her quirky Instagram posts, recently went for dinner with her tinsel town friends. Taking to her Instagram, she sha […]

Kabul, Aug 14 : The Taliban have declared Monday a public holiday in Afghanistan to mark one year since the Islamist militant group conquered Kabul during the chaotic withdrawal of US-led NATO forces. […]