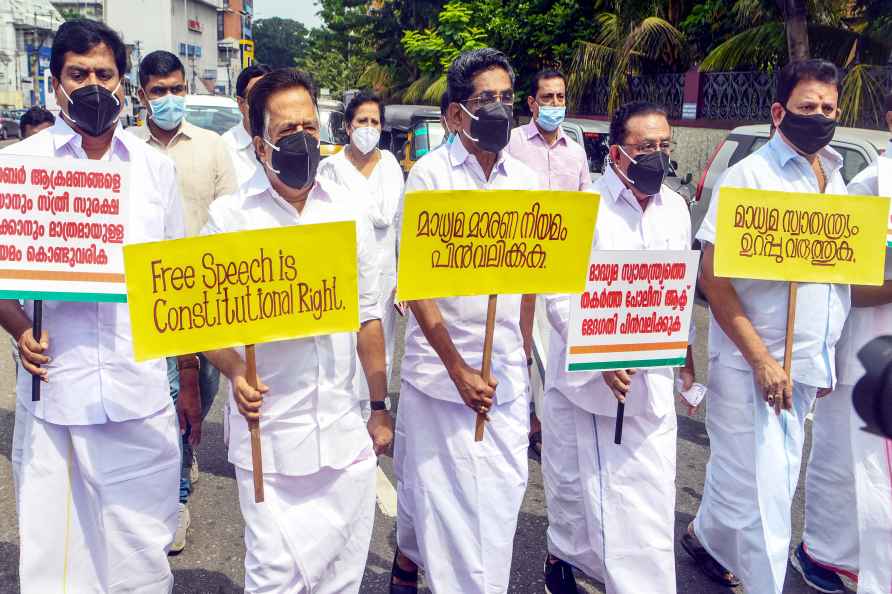 Thiruvananthapuram, June 25 : Leader of Opposition in Kerala Assembly V.D.Satheesan on Saturday alleged that state Health Minister Veena George's staff member led the Students Federation of India (SFI) activists in vandalising Wayanad Lok Sabha member Rahul Gandhi's office. He made the allegations while interacting with the media after visiting the vandalised office. "What has the SFI got to do with the buffer zone issue, when they till date have not even said a word on this." he wondered. "Around 300 activists from the CPI-M office in Wayanad moved towards Gandhi's office. They were carrying a plantain tree. The attack was led by the Health Ministry employee. The SFI today has become a group of goons and criminals. Among the attackers, a youth wing activist of the CPI-M was also present," said Satheesan. Gandhi's office was vandalised by the SFI activists on Friday as the police reportedly stood like a mute spectator. "Ever since Union Minister Smriti Irani visited Wayanad last month, the BJP national leadership has decided to make life tough for Gandhi. In Kerala, the BJP is too weak to carry out any such activity and hence the CPI-M has taken the "quotation" for it," alleged Satheesan. He further pointed out the SFI justifies their attack on the grounds that Gandhi did nothing on the buffer zone issue. "It's Vijayan who has played truant as Gandhi, in a letter, had asked him to take special note of the buffer zone issue as it's a state subject. Incidentally, in this buffer zone issue, Vijayan happens to be the prime culprit as he had given the nod for it despite a strong opposition by the Congress. Strangely, the CPI-M protests on buffer zone, for which it is solely responsible. They always have double standards," said Satheesan. Meanwhile, Union Minister of State for External Affairs V. Muraleedharan rubbished Congress's claims that the BJP and the CPI-M are hand in glove. "Why should that happen as all know at Nemom Assembly constituency in the state capital, it was the Congress and the CPI-M which were hand in glove to keep us out and it took place. (The BJP which opened its account in the 140-member Kerala Assembly in 2016, lost its sitting seat at Nemom in the April 2021 Assembly polls). At Wayanad, 19 SFI activists whose arrest was recorded on Friday by the local police for indulging in vandalisation was on Saturday remanded to judicial custody. Six more activists were arrested this morning. Meanwhile, dismissing the Congress's allegations, Veena George said that the person who is alleged to have taken part in the protest no longer her staff member as he had left the job early this month. /IANS

Vienna talks on Iran nuke deal end, with text ready for approval
Vienna, Aug 9 : Talks in Vienna to revive the Iran nuclear deal have ended with diplomats from the countries involved returning to their capitals with

New Delhi, Aug 9 : As trading in the stock market becomes more data and analytics-driven, the challenge for retail traders -- both the new and seasoned ones -- has always been what stock to buy or sel […]

Chennai, Aug 9 : The MSME units and the powerloom units in Tamil Nadu have strongly objected to the proposed power tariff hike. The Tamil Nadu Electricity Regulatory Commission has already reque […]

Ghaziabad: A vendor arranges national flags for sale at roadside, ahead of the Independence Day, in Ghaziabad, Tuesday, Aug 9, 2022. ( /PTI […]