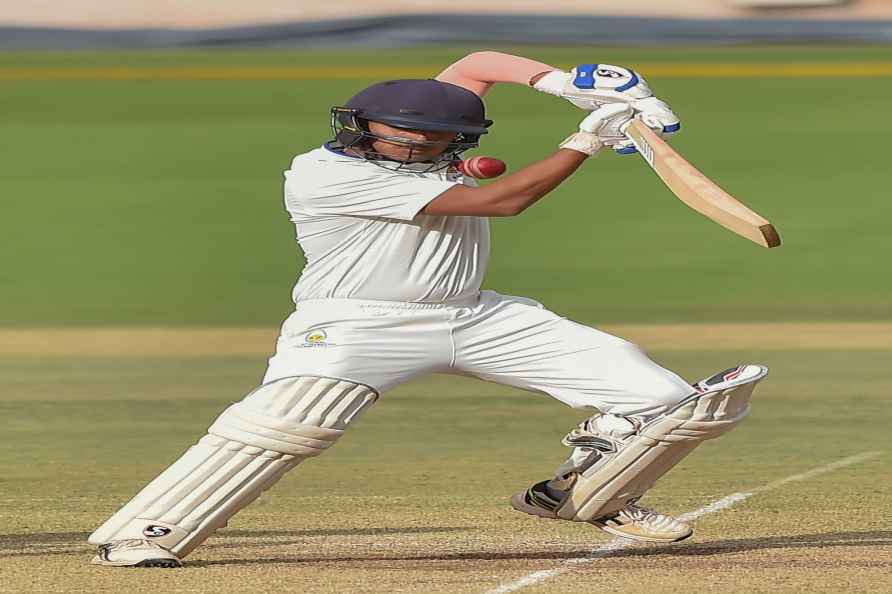 [Bengaluru: Mumbai batter Armaan Jaffer plays a shot during the fourth day of the Ranji trophy final cricket match between Mumbai and Madhya Pradesh, at M Chinnaswamy Stadium in Bengaluru, Saturday, June 25, 2022. ( /PTI] Bengaluru, June 25 : Mumbai cut a majority of their deficit down to 49 on day four of the Ranji Trophy final at the M Chinnaswamy Stadium on Saturday. But it was Madhya Pradesh, thanks to a crucial 162-run lead, who are in firm control of the final and lifting the trophy, as Rajat Patidar notched up a fine 122 while Saransh Jain brought up his maiden first-class fifty to take the side to 536. Though Mumbai are 113/2 in 22 overs at stumps, they are running out of time for giving themselves a small chance at winning the prestigious trophy. After getting Madhya Pradesh out for 536, Prithvi Shaw and makeshift opener Hardik Tamore (as Yashasvi Jaiswal didn't open due to ankle injury) started off well for a 63-run opening stand. Both batters got reprieves - Shaw was dropped by pacer Gaurav Yadav while Tamore was given a life by Rajat Patidar at first slip. Left-arm spinner Kumar Kartikeya Singh drew the first blood when Tamore chopped on to his stumps while attempting a sweep. Shaw, who had brought out some fireworks against Kartikeya and Anubhav Agarwal, was constantly enticed by Madhya Pradesh's bowling attack to attack balls on the fifth stump line in the outside off-stump channel. The tactic worked when Shaw was forced to reach out to the fifth-stump ball off Gaurav Yadav and drove straight to cover point. Armaan Jaffer, who also got a life when Gaurav spilled a caught-out chance, played some delightful shots through the off-side to remain not unbeaten on 34 alongside Suved Parkar (nine not out). If Friday belonged to Yash Dubey and Shubham Sharma making 133 and 116 respectively, Saturday saw Patidar hit the third century of Madhya Pradesh's first innings, followed by Saransh contributing with a useful knock from the lower-order. For Mumbai, left-arm spinner Shams Mulani took 5/173 in 63.2 overs. Patidar continued from where he left on day three, slamming the third century of Madhya Pradesh's first innings, with chants of 'RCB, RCB' coming from the crowd. Patidar, resuming from an overnight score of 67, began with a flick through mid-wicket off Mohit Awasthi. Mumbai tried to unsettle Patidar by banging the ball into the pitch, but with the bounce not much, Patidar was easily able to pull through mid-wicket twice. After Madhya Pradesh began to take the first-innings lead, Mumbai bounced back as Awasthi took out captain Aditya Shrivastava with a short ball while Tushar Deshpande sent Akshat Raghuvanshi's off-stump on a walk and Shams Mulani was rewarded for his persistent line and length by trapping Parth Sahani lbw. After swivelling a pull over fine leg, Patidar reached his second century of the season with a punch through deep point and acknowledged the applause for him with the raise of bat. Post reaching the three-figure mark, Patidar wowed everyone with his impressive punches off the pacers and late cut off off-spinner Tanush Koitan. Post lunch, Patidar could add only two runs to his score before Deshpande got one to shape back in and castle him through the gate. Saransh continued to crack boundaries but Mumbai had another success with Mulani trapping Agarwal lbw before rain stopped play for 12 minutes. After play resumed, Mulani had another wicket when Kartikeya chipped straight to short cover. Saransh hit two more boundaries and reached his maiden fifty in first-class cricket with a brace through deep mid-wicket before rain came again and forced an early tea break to be taken, with him being unbeaten at 51. After tea, Madhya Pradesh's innings lasted for seven more balls with Saransh being the last man to fall. Though Mumbai wiped off a majority of the deficit in the final session of the day, Patidar and Saransh ensured that Madhya Pradesh continued to have a strong hold on the final. Brief Scores: Madhya Pradesh 536 all out in 177.2 overs (Yash Dubey 133, Rajat Patidar 122, Shubham Sharma 116; Shams Mulani 5/173, Tushar Deshpande 3/116) lead Mumbai 374 all out in 127.4 overs and 113/2 in 22 overs (Prithvi Shaw 44, Armaan Jaffer 30 not out; Gaurav Yadav 1/23, Kumar Kartikeya Singh 1/50) by 49 runs /IANS