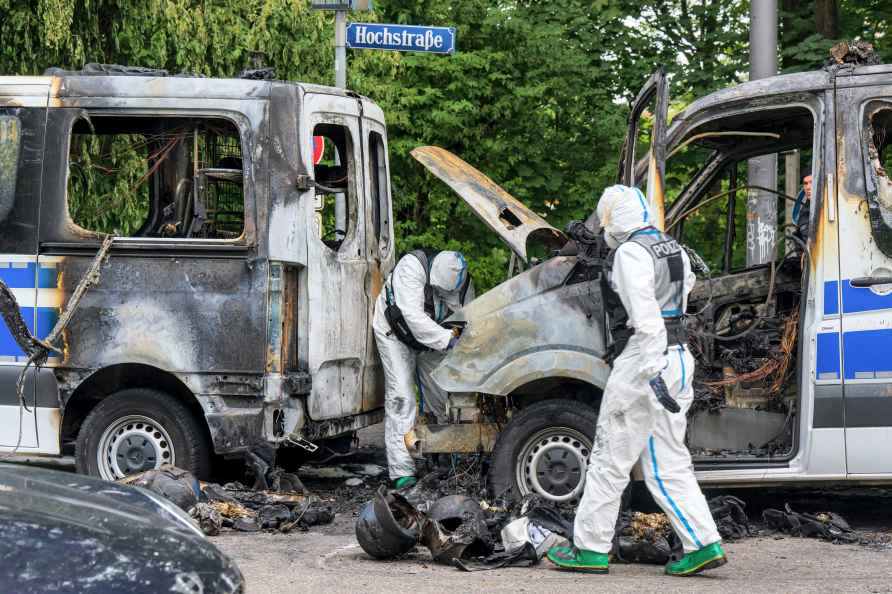 [Munich: Forensics investigators work on a police car that burned out during the night, Wednesday, June 22, 2022. The team buses of the federal riot police are parked in front of a hotel where police officers are accommodated for the G7 summit. Investigators assume that the fire was caused by arson. /PTI] Kanpur, June 22 : The Special Investigation Team (SIT), Kanpur Commissionerate of Police and Kanpur Outer Police, have arrested two more accused persons into the Nirala Nagar massacre in Uttar Pradesh's Kanpur district that took place during the 1984 anti-Sikh riots. The total number of accused arrested so far has gone up to six now. Deputy Inspector General of Police, SIT, Balendu Bhushan Singh, said on Wednesday, "We have arrested Amar Singh,61, and one Mobeen, 60, from Ghatampur area in a raid." Earlier, on June 15, four accused in the Nirala Nagar massacre identified as Yogendra Singh, Vijay Narain Singh, Shafiullah and Abdul Rehman were arrested by the SIT. The biggest catch Raghavendra Kushwaha, nephew of Shivnath Singh Kushwaha, who was Minister of State during the Congress government, is, however, yet to be arrested. The police officials said that one of the accused surrendered before the police team as soon as the raids began. In 1984, Bhupendra Singh and Rakshpal Singh were burnt alive in Nirala Nagar, while Satveer Singh, son of Sardar Gurudayal Singh, was shot dead. After the formation of SIT in 2019, 31 accused were identified in the case, of which four accused -- Shafiullah, Yogendra Singh, Vijay Narain Singh and Abdul Rehman -- were arrested and sent to jail. The SIT has completed the investigation of 11 cases and identified 96 accused, among whom 22 have died. A total of 127 Sikhs were killed in the riots in the aftermath of Prime Minister Indira Gandhi's assassination by her security personnel. Nearly, 40 cases of murder, robbery and dacoity were registered, in which 29 were closed by the police with submission of final report. When the state government constituted an SIT for investigation, 29 cases were investigated again and the SIT got evidence in 14 cases. The SIT was set up on May 27, 2019, after the Supreme Court issued a notice to the state government in August 2017 on a petition seeking an SIT probe. The four-member SIT is headed by retired Uttar Pradesh Director General of Police Atul. The other members are retired district judge Subhash Chandra Agarwal and retired Additional Director (prosecution) Yogeshwar Krishna Srivastava. Superintendent of Police Balendu Bhushan Singh is its member secretary. /IANS