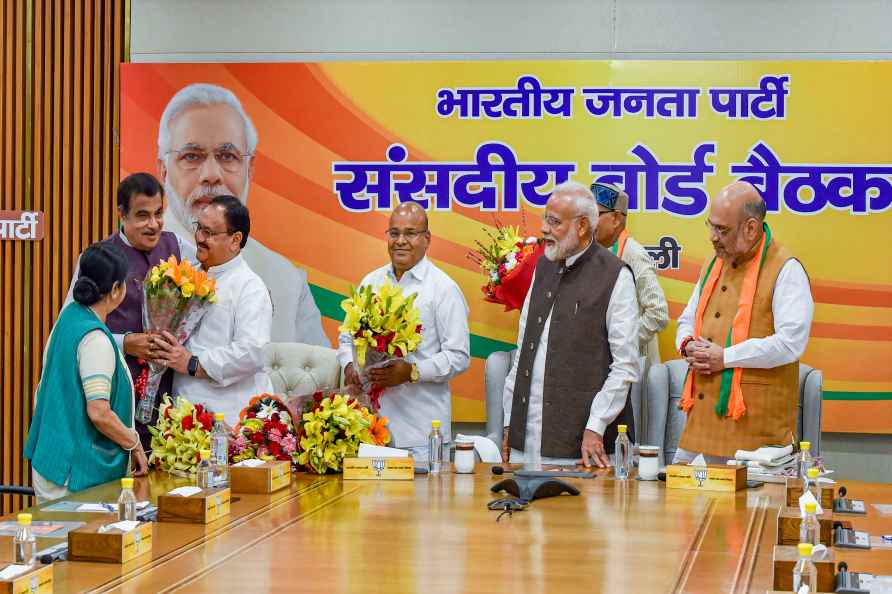 New Delhi, June 20 : BJP chief J.P. Nadda on Monday interacted with a senior Communist Party leader of Vietnam Nguyen Van Nen at party headquarters here. Nen is the member of the politburo of the Communist Party of Vietnam and also the secretary of the Ho Chi Minh city party committee. BJP National General Secretary (organisation) B.L. Santhosh and in-charge of party foreign affairs department Dr Vijay Chauthaiwale were also present during the meeting. The BJP, in a statement, said that Nen visited the party headquarters to understand its functioning and also to strengthen relations between the two countries. "Nen thanked Prime Minister Narendra Modi and India for India's help during the Covid-19 pandemic. The statue of great Vietnamese leader Ho Chi Minh is being installed in front of the Vietnam Embassy tomorrow. Nen also thanked India and Prime Minister Modi for this," the BJP said. Welcoming Nen and other dignitaries, Nadda recalled the great relations and strong connections between the two nations. He mentioned how the strong relationship between the two nations have flourished since the visit of India's first Prime Minister and first President to Vietnam. Nadda also talked about the historic visit of Prime Minister Modi to Vietnam in 2016, besides mentioning the visit of President Ram Nath Kovind and also the recent visit of Defence Minister Rajnath Singh. During the interaction, Nen asked several questions about the functioning of the BJP, its organisational structure, its strong connect with the workers at the grassroots level, its internal election process, internal communication and the party's training system. Answering each question in detail, Nadda recalled the history of the BJP, its long journey, its struggle and electoral successes, the changes that the BJP governments have brought in the Centre and states and also the future plans of the party. He also described various social activities and initiatives of the party during Covid-19. Santosh elaborated on internal communication, membership drive, mentoring and training of the new members and expansion of the party. This meeting is in continuation with the party's outreach programme 'Know BJP' through which Nadda is interacting with foreign dignitaries and head of missions in India. So far, Nadda has interacted with Nepal Prime Minister Sher Bahadur Deuba, Minister for Foreign Relations of Singapore Vivian Balakrishnan and also envoys of 47 countries, including European Union. /IANS

Birmingham, Aug 6 : Ace Indian shuttler PV Sindhu reached the women's singles semifinals at the Commonwealth Games 2022 after seeing off a tough challenge from Malaysian No 1 Goh Jin Wei in the quarte […]