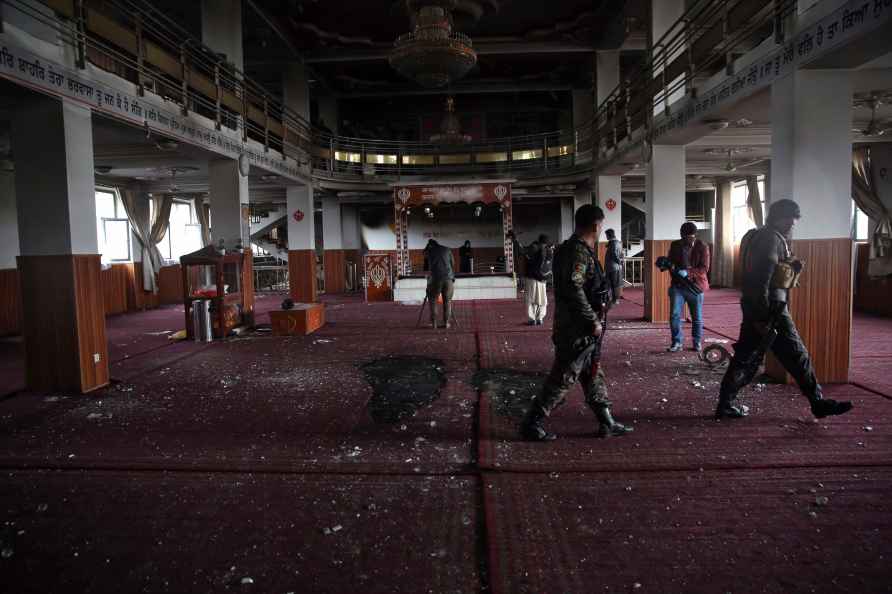 New Delhi, June 20 : Union Minister Hardeep Singh Puri on Monday met the family of Savinder Singh who was killed after Islamic State - Khorasan Province (ISKP) attacked Karte Parwan Gurdwara in Kabul. The Union Minister gave Prime Minister Narendra Modi's letter to the members of the Afghan Sikh community living in India on the occasion. "Conveyed heartfelt condolence message of PM Sh @narendramodi Ji to members of the Sikh Sangat on the martyrdom of Shaheed Sardar Savinder Singh ji in the dastardly attack on Gurdwara Karte Parwan, Kabul", he said in a tweet. Puri also participated in the last rites of Savinder Singh held at Gurudwara Guru Arjan Dev ji in Tilak Nagar on Monday. He offered his deepest condolences to the family and the Afghan Sikh community living in India. "Paid my condolence to Sdr Arjeet Singh Ji, the son of Shaheed Sardar Savinder Singh ji who attained Shaheedi in the cowardly attack on Gurdwara Karte Parwan in Kabul. Interacted with other members of the bereaved family during the Antim Ardas today", said the Minister in another tweet. A delegation from the Afghan embassy with Afghan Ambassador to India Farid Mamundzay were also present on the occasion. /IANS

'Lashkar-e-Khalsa can carry out terror attacks in India', warns Intelligence Bureau
New Delhi, Aug 4 : Ahead of the Independence Day, the Intelligence Bureau (IB) has issued an alert of a possible terror strike in the national capital

Thiruvananthapuram, Aug 9 : Chief Minister Pinarayi Vijayan has turned down Leader of Opposition in Kerala Assembly V.D.Satheesan's request to hold a special sitting of the assembly to commemora […]

Ozzy Osbourne back after surgery for CWG closing ceremony act

London, Aug 9 : The legendary Ozzy Osbourne is back to where he belongs - the stage, entertaining the audience with his work. Ozzy, the lead vocalist of the iconic heavy metal band 'Black Sabbat […]

Kiran Rao returns to direction after 11 years with 'Laapataa Ladies'

Mumbai, Aug 9 : Producer and director Kiran Rao, who started her film journey as one of the assistants on the sets of the iconic film 'Lagaan', is set to return to direction after over a decade since […]