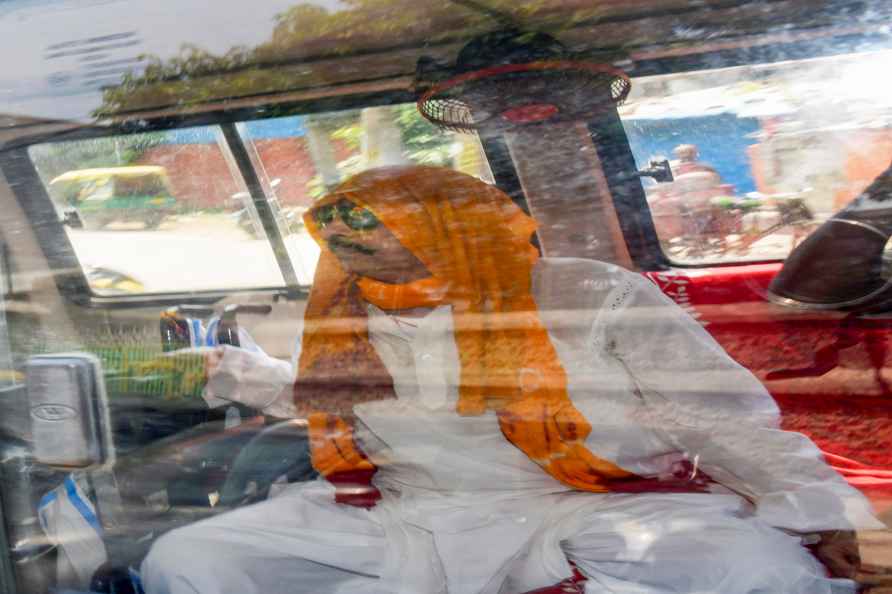 [Patna: Convicted RJD MLA from Mokama Anant Singh being taken away in a van from the court after he was sentenced to ten years in AK-47 and grenade recovery case, in Patna, Tuesday, June 21, 2022. ( /PTI] Patna, June 21 : A special court here on Tuesday sentenced Bahubali RJD MLA Anant Singh to 10 years imprisonment in the AK-47 recovery case. In 2019, an AK-47 rifle, two hand grenades and 26 live cartridges were recovered from Anant Singh's house in his native village and the MP-MLA court on June 14 held him guilty of the offence. Besides Anant Singh, the caretaker of his house Sunil Ram has also been awarded 10 years in jail. MP-MLA court judge Triloki Dubey has announced the highest quantum of punishment to the RJD MLA and his caretaker. His conviction in the case is set to cost him his legislatorship in Bihar Assembly. Anant Singh is currently an MLA from Mokama Assembly constituency in Patna district. Sunil Singh, the lawyer of Anant Singh (Defense Lawyer) confirmed the quantum of punishment of 10 years jail term. "We will appeal to the higher court to challenge the decision of the MP-MLA court. If we manage to get a stay from the high court against this decision, Anant Singh's legislatorship will remain," Singh said. This morning, Anant Singh reached MP-MLA court located at Pirbahore area of Patna in a jail ambulance. A team of Patna police headed by then City SP Lipi Singh raided the house of Anant Singh in his native village Nadwa under Barh police station on August 16, 2019. As per the police theory, the raiding team had seized an AK-47 rifle, 26 live cartridges, and two hand grenades. While the AK-47 rifle was hidden in a hutment behind a big box, the hand grenades were recovered from the adjoining hut. The police said that AK-47 was evenly wrapped with a plastic bag followed by layers of carbons to avoid detection in metal detectors during transportation. At the time of the raid, Anant Singh was not in Bihar. He fled to Delhi and surrendered before the lower court there. Bihar police took his custody and put him behind the bars of Patna Beur jail. Since then, he has been lodged in Beur jail. During the three years trial of the case, the prosecution side produced 13 witnesses and their statements were recorded in the court. The defense side also produced 34 witnesses before the court. The hearing of the case was completed on June 13 and he was held guilty on June 14. The house in Nadwa village belongs to Anant Singh but he was not living in it and was being managed by a caretaker. /IANS

New Delhi, Aug 6 : Wheat prices have seen a significant rise to cross a record Rs 2,500 per quintal due to slower supplies and robust demand. According to traders in Delhi, the heat wave led to […]

Los Angeles, Aug 6 : Hollywood actor Danny Trejo has been cast for the role of Portuguese explorer Ferdinand Magellan in '1521', an upcoming historical epic that charts the pre-colonial era of the Phi […]

Bengaluru, Aug 6 : Chief Minister Basavaraj Bommai is set to hold a video conference with Deputy Commissioners and other senior officials of the rain-affected districts on Saturday. Chief Minist […]