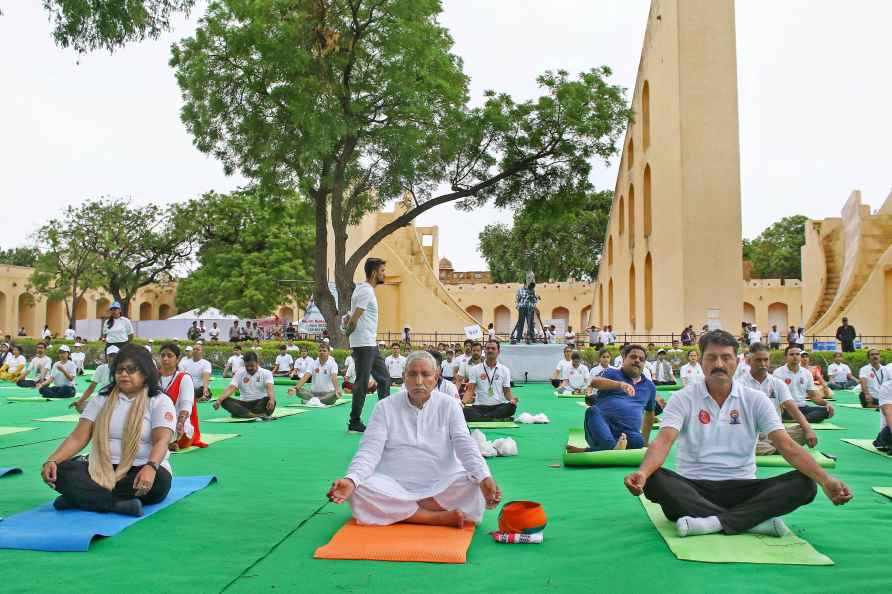 [Jaipur: Union Minister Arjun Ram Meghwal with others attends a yoga session at the Jantar Mantar on the 8th International Day of Yoga Day, in Jaipur, Tuesday, June 21, 2022. ( /PTI] Mysuru (Karnataka), June 21 : Prime Minister Narendra Modi participated along with thousands of people in a Mass Yoga Demonstration at the Mysore Palace ground here on the occasion of 8th International Day of Yoga (IDY) on Tuesday, and said that 'Yoga has become a way of life'. Integrating the 'Azadi Ka Amrit Mahotsav' with celebrations of 8th IDY, Mass Yoga demonstrations are being organised at 75 iconic locations across the country under the leadership of 75 Union Ministers, along with the Yoga Demonstration by the Prime Minister. The Yoga demonstrations are also being held by various educational, social, political, cultural, religious, corporate and other civil society organisations and will be attended by crores of people across the country. The Prime Minister's Yoga programme at Mysuru is also part of the novel programme 'Guardian Yoga Ring', which is a collaborative exercise between 79 countries and United Nations organisations along with Indian Missions abroad to illustrate Yoga's unifying power that surpasses National boundaries. Since 2015, the International Day of Yoga (IDY) has been celebrated worldwide on June 21 every year. The theme for this year's Yoga day is "Yoga for Humanity". The theme portrays how Yoga served humanity in alleviating suffering during the Covid Pandemic. Governor of Karnataka Thaawarchand Gehlot, Chief Minister Basavaraj Bommai and Union Minister for Ayush Sarbananda Sonowal were among those present on the occasion. Speaking on the occasion, the Prime Minister said the yogic energy, which has been nurtured for centuries by the spiritual centers of India like Mysuru, is today giving direction to global health. "Today yoga is becoming a basis for global cooperation and is providing a belief of a healthy life to mankind," he added. He said, "Today we see that Yoga has come out of the households and has spread all over the world and this is a picture of spiritual realization, and that of natural and shared human consciousness, especially in the last two years of an unprecedented pandemic," PM Modi stated. He further said, "Yoga has now become a global festival. Yoga is not only for any individual, but for the entire humanity. Therefore, this time the theme of International Day of Yoga is - Yoga for humanity." He thanked the United Nations and all the countries for taking this theme globally. Quoting the Indian sages, the Prime Minister emphasized "Yoga brings peace for us. The peace from yoga is not merely for individuals. Yoga brings peace to our society. Yoga brings peace to our nations and the world. And, Yoga brings peace to our universe." "This whole universe starts from our own body and soul. The universe starts from us. And, Yoga makes us conscious of everything within us and builds a sense of awareness," he underlined. The Prime Minister remarked that India is celebrating Yoga Day at a time when the country is celebrating its 75th year of Independence, the Amrit Mahotsav. This widespread acceptance of Yoga Day, the Prime Minister said, "is the acceptance of that Amrit spirit of India which gave energy to India's freedom struggle. That is why Mass Yoga demonstrations are being organised at 75 iconic locations across the country which have been witness to the glorious history of India and have been the center of cultural energy." "The experience of collective yoga at the historical sites of India is like tying together India's past, India's diversity, and India's expansion", he elaborated. He also informed about the novel programme 'Guardian Yoga Ring', which is a collaborative exercise between 79 countries and United Nations organisations along with Indian Missions abroad to illustrate Yoga's unifying power that surpasses national boundaries. "As the sun moves from the east to the west across the world, the Mass Yoga Demonstrations in the participating countries, if seen from any one point on Earth, will seem to be happening one after the other, almost in tandem, thus underlining the concept of 'One Sun, One earth'. "These practices of yoga are giving wonderful inspiration for health, balance and cooperation", he added. Modi pointed out that Yoga is not just part of life for us, today, it has become a way of life. He said Yoga need not be limited to a particular time and location. He said, "No matter how stressful we are, a few minutes of meditation relaxes us and increases our productivity. Therefore, we do not have to take yoga as an extra work. We also have to know yoga and we also have to live yoga. We also have to achieve yoga, we also have to adopt yoga. When we start living yoga, Yoga Day will become a medium for us not to do yoga, but to celebrate our health, happiness and peace." The Prime Minister said that today is the time to realize the infinite possibilities associated with yoga. "Today our youth are coming in large numbers with new ideas in the field of yoga. He informed about the Startup Yoga Challenge by the Ayush Ministry. The Prime Minister congratulated the winners of 2021 winners of 'Prime Minister's Awards for outstanding contribution for Promotion and Development of Yoga'." /IANS

Jammu: Wailing mother and other relatives of army soldier Sukhjinder Singh at his residence at Suchetgarh near Jammu, Thursday, Aug 4, 2022. Singh died after being hit by a boulder during patrolling n […]

New Delhi: Congress MPs at a meeting in Parliament House, in New...