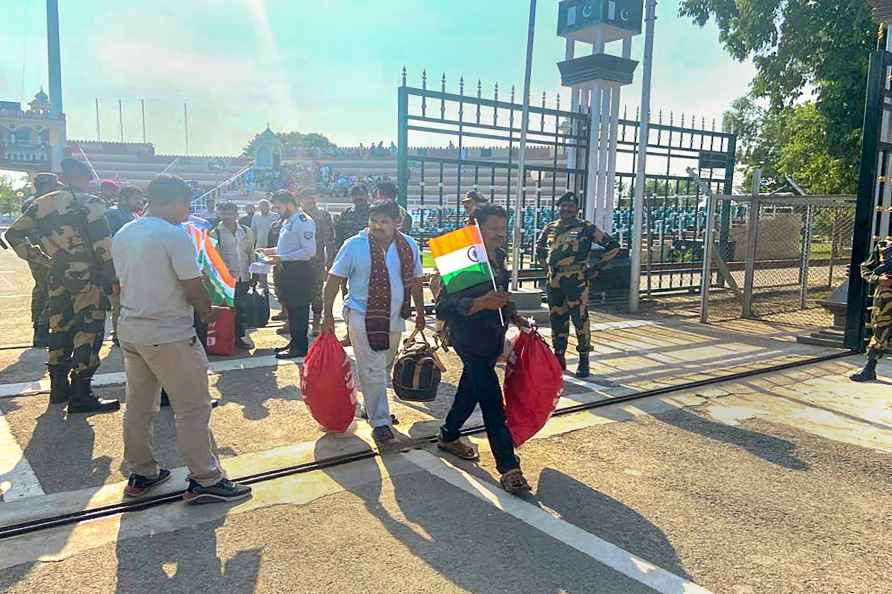 [**EDS: TO GO WITH STORY** Attari: 20 Indian fishermen who were jailed in Karachi for allegedly fishing illegally in Pakistan's waters, arrive at the Attari-Wagha border after being released by Pakistan, Monday, June 20, 2022. ( /PTI] Porbandar, June 20 : After languishing in a jail in Karachi for four years, 20 Gujarati fishermen will finally reunite with their families on Monday, a day after they were released. Although the community has welcomed Pakistan's decision, they still felt that it was too little too late. After their release from Karachi's Malir District Jail, the fishermen were sent to Lahore by bus from where they will be handed over to the Indian authorities through the Wagah border on Monday. Of the 20, 13 fishermen are from Gujarat's Gir Somnath district, six from Devbhumi Dwarka and one from Jamnagar, according to Balubhai Sosa, president of the Samudra Shramik Suraksha Sangh. While alleging that the Pakistani Marines Security Agency had illegally captured them in 2018, he expressed concerns about the 600 other Indian fishermen held in Pakistani jails and if the New Delhi government would be able to secure their release. After over a year of talks, the Pakistan government was going to release 200 fishermen, but now only 20 are returning, Manish Lodhari, Chairman of Marine Fishermen Cooperative Society, said, adding that this was why the community and the affected family members feel it is too little too late. Lodhari claimed that on an average, 60 to 90 Indian fishermen are arrested by Pakistan every year, while only around 70 to 80 Pakistani fishermen are in the Indian jails. The government should work on some formula for the exchange of these 70 to 80 Pakistani fishermen against the 600 Indians, he said. Pakistan has also seized 1,164 fishing boats that are currently anchored at the Karachi port, which should be brought, as its total market value touches thousands of crores of rupees, Lodhari added. /IANS