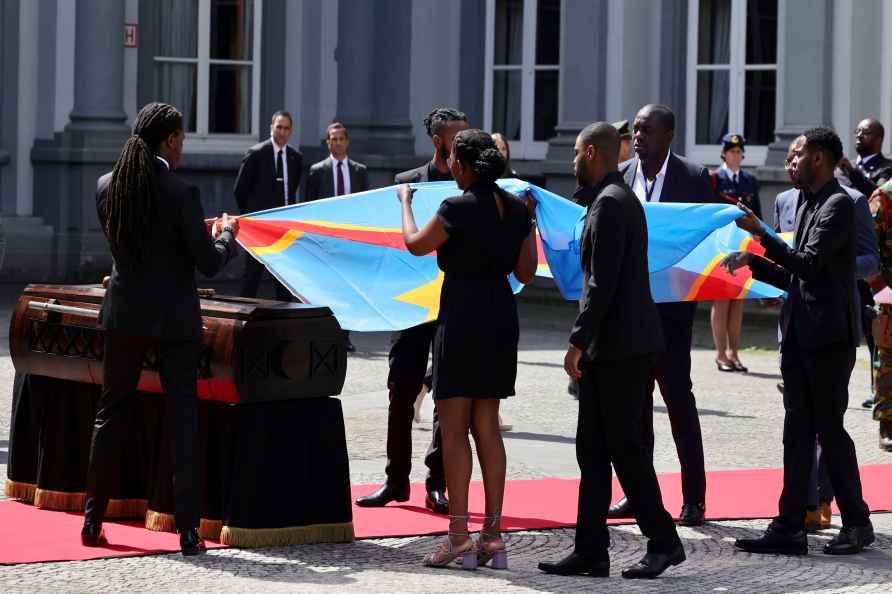 [Protocol members prepare to cover the casket with the mortal remains of Patrice Lumumba with a Congolese flag during a ceremony at the Egmont Palace in Brussels, Monday, June 20, 2022. On Monday, more than sixty one years after his death, the mortal remains of Congo's first democratically elected prime minister Patrice Lumumba were handed over to his children during an official ceremony in Belgium. /PTI] Montreal (Canada), June 20 : Red Bull's Max Verstappen held off a late charge from Ferrari's Carlos Sainz to take his sixth win of the 2022 Formula 1 season in the Canadian Grand Prix. Starting from pole position on Sunday, Verstappen had the measure of Sainz for most of the race, despite the two drivers opting for slightly different tyre strategies as a couple of Virtual Safety Car periods punctuated the first half of the race. However, a late-race Safety Car deployment to clear Yuki Tsunoda's stricken AlphaTauri allowed Sainz to close right up to Verstappen's gearbox, and when racing resumed on Lap 54, it seemed as if the Ferrari would be in a good position to attack, Xinhua reports. Though Sainz was able to use DRS to close up to Verstappen down the back straight at the Circuit Gilles Villeneuve, the Dutchman always eked out enough of an advantage around the other side of the track to keep Sainz at bay, and held on to take his fifth win in the last six Grands Prix of 2022. "The Safety Car didn't help. Overall, (Ferrari) were very quick in the race, so it would have been really tough for me to close that gap at the end even on fresher tyres," said Verstappen. "But it was really exciting at the end -- I was giving it everything I had and, of course, Carlos was doing the same. I could see he was pushing and charging. The last few laps were a lot of fun. Luckily, this year, we seem really quick on the straights so that helps a lot." Behind the top two, Lewis Hamilton took the final podium position on Mercedes' most competitive Sunday of the season so far. Hamilton's teammate George Russell finished fourth, ahead of Sainz's teammate Charles Leclerc, who salvaged fifth place after starting 19th following penalties for excessive component usage, and whose progress was helped by the late Safety Car. Alpine's Esteban Ocon took sixth place, ahead of Valtteri Bottas in his Alfa Romeo. Behind Bottas was the other Alfa of Zhou Guanyu, who scored his best-ever finish in F1 with eighth place. Ocon's teammate Fernando Alonso had crossed the line in seventh but was demoted to ninth after receiving a five-second penalty for excessive weaving as he defended his position. Having qualified on the front row alongside Verstappen, the Spaniard may be disappointed with his final position. Aston Martin's Lance Stroll rounded out the top ten at his home race. In addition to Tsunoda, the other two cars to fail to see the chequered flag were Red Bull's Sergio Perez and the Haas of Mick Schumacher, both of whom pulled off with mechanical issues. With Perez failing to score, Verstappen's win sees him extend his lead in the Drivers' Championship and the Dutchman now has 175 points. Perez remains second with 129, but Leclerc has closed up to the Mexican with 126 points. In the Constructors' Championship, Red Bull still lead and now have 304 points. Ferrari stay second with 228, and Mercedes remain third with 188 points. The next round of the 2022 F1 World Championship is the British Grand Prix at Silverstone on July 3. /IANS

New Delhi, Aug 6 : Wheat prices have seen a significant rise to cross a record Rs 2,500 per quintal due to slower supplies and robust demand. According to traders in Delhi, the heat wave led to […]

Los Angeles, Aug 6 : Hollywood actor Danny Trejo has been cast for the role of Portuguese explorer Ferdinand Magellan in '1521', an upcoming historical epic that charts the pre-colonial era of the Phi […]

Bengaluru, Aug 6 : Chief Minister Basavaraj Bommai is set to hold a video conference with Deputy Commissioners and other senior officials of the rain-affected districts on Saturday. Chief Minist […]