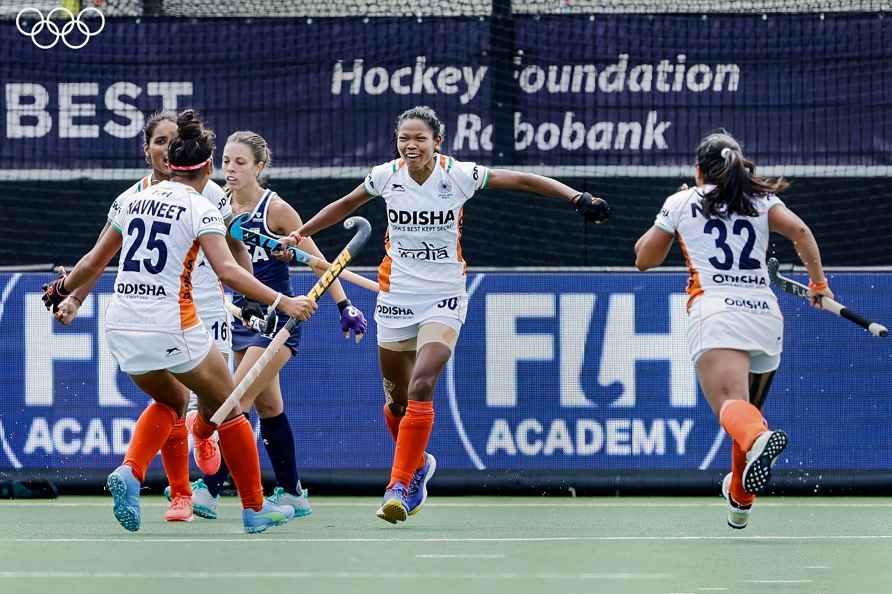 [**EDS: TWITTER IMAGE POSTED BY @airnewsalerts ON SUNDAY, JUNE 19, 2022** Rotterdam: Indian players during the Women's FIH Pro League hockey match between India and Argentina, in Rotterdam, Netherlands. India defeated Argentina 2-1 in the shoot-out. ( /PTI] Rotterdam (Netherlands), June 19 : The Indian women's hockey team came up with another brilliant performance but fell short in their efforts as World No. 2 Argentina emerged 3-2 winner in their FIH Hockey Pro League encounter here on Sunday. After a morale-shattering 0-5 defeat to Belgium a few days back, the Indians had come back to hold Argentina 3-3 in the first encounter before losing in the shoot-out. On Sunday, they mounted another fightback after Argentina had scored three goals within five minutes in the third quarter to make it 3-1. India had taken the lead in the second quarter with Salima Tete had given them the lead in the 22nd minute. Jennika Schopman's side pulled one goal back in the fourth quarter but could not draw the match like on Saturday despite putting up a sensational defensive effort in the first session even though they were reduced to nine players just before the half-time when Sonika (green card) and Deepika (yellow) were sent to the sin bin. With this win Argentina, who had already won the title with two matches to spare, finished their campaign with 42 points from 16 matches, finishing the tournament without a single defeat in regulation time. India now have 24 points from 12 matches with two games against the United States to go. They remain in the third position in the standings. It was even-stevens in the first half as far as possession was concerned but the Indians came out for the breather smiling as they led 1-0 thanks to an excellent solo effort by Salima Tete. Argentina, who had 13 circle penetrations in the first session, held sway in the first quarter, bagged two penalty corners and created several chances. But the Indian defense stood strong, especially skipper and goalkeeper Savita brilliant her blocks, effecting three super saves -- two of them off the penalty corners. India, who made a nervous start despite coming back to hold the champion-elect 3-3 in the first match of the double-header on Saturday, were at their best in the second quarter, dominated possession and created some good chances. Salima Tete put them ahead in the 22nd minute when she made a brilliant run into the circle off a quick-silver counterattack and planted a powerful shot inches past goalkeeper Succi from the top of the circle. However, Argentina showed why they were the best performing team in the FIH Pro League 2021-22 as they struck thrice in the third quarter to turn the match their way. They attacked the from the right and opened up the Indian defence and went 3-1 up. The Las Leonas equalised in the 37th minute off a good run by Sofia Toccalino, who sent a pass-back from the goal line and Thome Delfina tapped it and the ball ballooned off Savita's stick into the goal. India bagged two penalty corners in quick succession but one was saved by Argentina goalkeeper Belen Succi while the Indians shot wide off the second. The Argentina team obtained a penalty corner in the 41st minute and Augustina Gorzelany laid it for Eugenia Trinchinetti to deflect the ball into the goal to make it 2-1. Two minutes later, Argentina earned another PC, and Gorzelany planted a powerful flick to make it 3-1 for Argentina. Argentina could have scored a couple of more goals in the third quarter but Savia affected two brilliant reflex saves to keep things in control for India. India pulled one goal back when Neha made a fantastic run in the 48th minute and helped India earn a Penalty Corner. Deep Grace Ekka scored with a superb slap-sweep past goalkeeper Succi and into the net. Argentina kept up the pressure on their opponents and earned a Penalty Corner in the 50th minute, but the Indians kept the ball away from their goal. Salima Tete made another brilliant run in the 56th minute and passed the ball to Vandana Katariya, who took a shot, but Succi effected a magnificent save to keep the Indians at bay. The Indian team tried its best to find the equaliser, but the Argentines stood tall and eventually walked off the field as winners of the match. /IANS