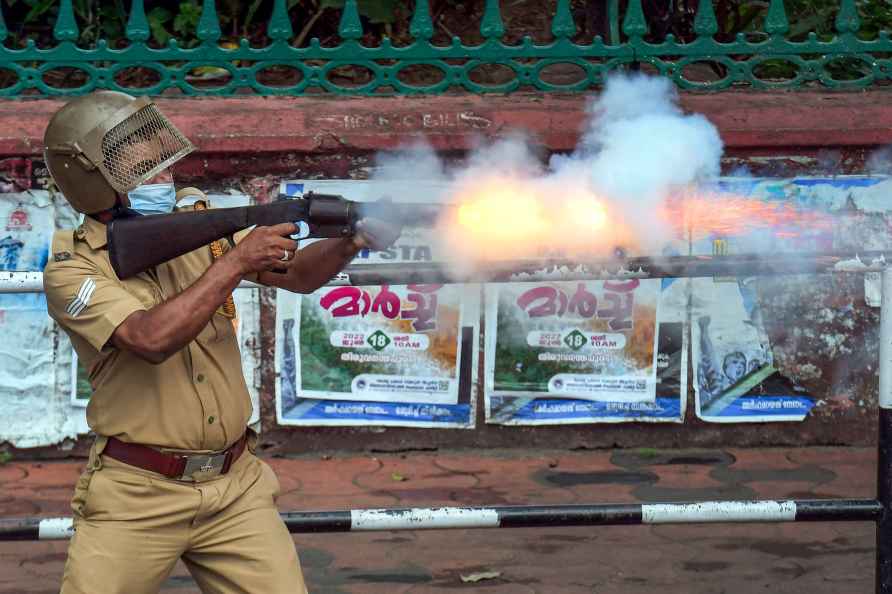 [Thiruvananthapuram: A policeman fires a tear gas shell to disperse Youth Congress activists protesting outside the Kerala Secretariat, demanding the resignation of Kerala Chief Minister Pinarayi Vijayan over the Kerala gold smuggling case, in Thiruvananthapuram, Saturday, June 18, 2022. ( /PTI] Thiruvananthapuram, June 18 : Kannur is the stroghold of the CPI-M in Kerala as the party has the maximum number of members, sympathizers and followers in this district. This is also the home district of Kerala Chief Minister Pinarayi Vijayan, party state secretary Kodiyeri Balakrishnan, LDF convener and senior CPI-M leader, E.P. Jayarajan, and a horde of other leaders. The Kannur lobby is considered the most powerful in the state for CPI-M which does not have any opposition within the party. However, the party has been left red-faced in its most powerful district after Payyannur area secretary of the party, C.V. Kunhikrishnan, was removed from the post. Kunhikrishnan had given a detailed complaint to the party district committee over allegations of misappropriation of funds that was collected for the construction of the party building. He had also alleged misappropriation of election funds and swindling of funds collected for party martyr Dhanraj. The allegation was pointed against CPI-M Kannur district secretariat member, T.I Madhusoodanan who is also presently the Payyannur MLA of the party. Payyanur is one of the strongest CPI-M constituencies and Kerala Chief Minister Pinarayi Vijayan got elected from the seat in 1996 and went on to become the state minister for electricity in the then E.K. Nayanar cabinet. The allegations had rocked the Payyannur area committee of the party with a large section of the area committee members supporting Kunhikrishnan who is considered an upright party leader. While CPI-M did not bring out an official communication on the action taken against the party leaders, Kunhikrishnan resigned from the director board membership of Vellore cooperative bank. The CPI-M Payyannur area committee has 21 members and 16 of these came out in support of Kunhirishnan during the discussion on fund misappropriation while five members reserved their comments. Social media and CPI-M handles are abuzz with support for Kunhikrishnan after he was removed from the post and T.V. Rajesh was given the charge. The party local workers and cadres are pointing out how Kunhikrihsnan who had brought out the fund misappropriation allegations against the MLA and other leaders, could be subjected to party action. CPI-M Kannur district secretary M.V. Jayarajan, however, did not comment about the action taken against the CPI-M leaders including T.I. Madhusoodanan. In Kannur, the CPI-M is in embarrassing situation with party leaders not in a position to explain how Rs 42 lakh collected as funds for the family of Dhanraj, a party cadre who was killed by political opponents, was misappropriated. Sources in Kannur CPI-M told IANS that the party has already started patch-up talks with Kunhikrishnan but he has categorically stated that he would not have any parleys with the CPI-M again. With the CPI-M in a spot in its strong district, it has to be seen how the party would come out of the imbroglio in Kannur. /IANS