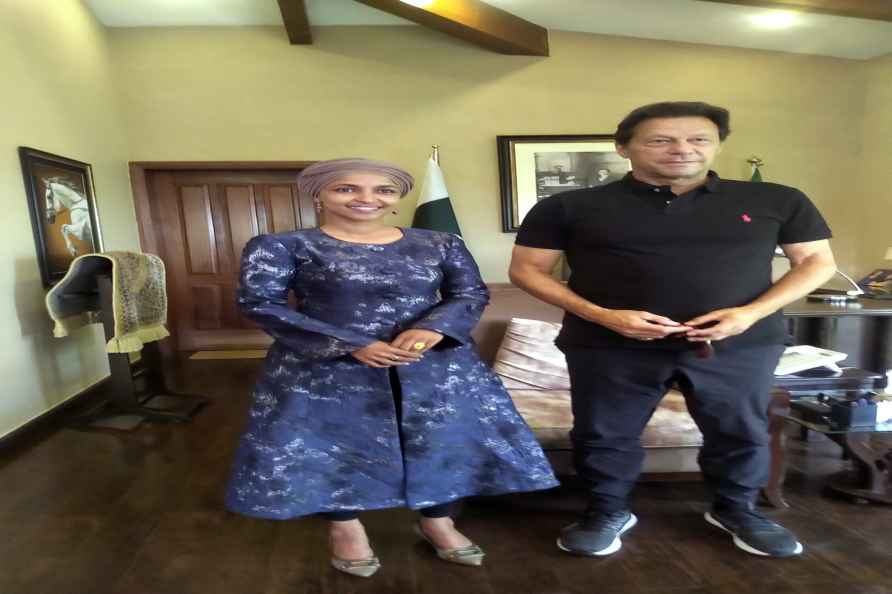 Islamabad, June 14 : Pakistan Interior Minister Rana Sanaullah on Tuesday accused former Prime Minister Imran Khan and his wife Bushra Bibi of accepting Rs 5 billion and hundreds of kanals of land from Bahria Town in return for "providing protection" to the real estate firm in a money laundering case during the PTI rule, media reports said. Addressing a press conference in Islamabad, Sanaullah said Bahria Town had "illegally transferred" Pak Rs 50 bn to a Pakistani national in the UK. The transfer, he said, was identified by the UK's National Crime Agency, which subsequently informed the then PTI government of the crime, Dawn reported. Sanaullah claimed that Imran Khan, the Prime Minister at the time, had tasked Shehzad Akbar, ex-PM's aide on accountability, to resolve the matter. Akbar "settled" the entire case, while the Rs 50 bn - which was state property and belonged to the national treasury - was adjusted against Bahria Town's liability, the interior minister alleged. He said the former prime minister accepted a graft of Rs 5 bn as "his share" through Akbar before the case was wrapped up. Sanaullah said the federal cabinet has formed a sub-committee to investigate the scandal and deal with it as per the law. "The case did not just end here. Bahria Town, after its Rs 50 bn was protected by the government, entered an agreement and allotted a 458-kanal land with an on-paper value of Rs 530 million to a trust owned by Imran and his wife," he claimed, Dawn reported. Bahria Town donated the land to the Al-Qadir Trust, with the agreement bearing signatures of the real estate developer's donors and Bushra Khan - the wife of Imran Khan, Sanaullah alleged. He said the non-profit organisation had only two trustees: Imran Khan and Bushra Bibi. The minister said that another 240 kanals were transferred to Farah Shehzadi - commonly known as Farah - a close friend of Bushra Bibi, Dawn reported. He said the nation's wealth was "looted and the then-first lady signed the documents without any fear". /IANS

School manager booked on 'Kalma' issue in Kanpur
Kanpur, Aug 3 : The manager of the Florets International school here has been booked after a parent lodged a complaint about children being made to re

Robbers pose as gays, rob K'taka techie after inviting him on date
Bengaluru, Aug 3 : Karnataka Police have arrested a gang of three miscreants on charges of robbing a software professional posing themselves as gays i

Kolkata, Aug 3 : As one reaches Uyari village of Khandaghosh community block under West Bengal's Purba Bardhaman district, he is bound to be gripped by the essence of India's freedom movement associat […]