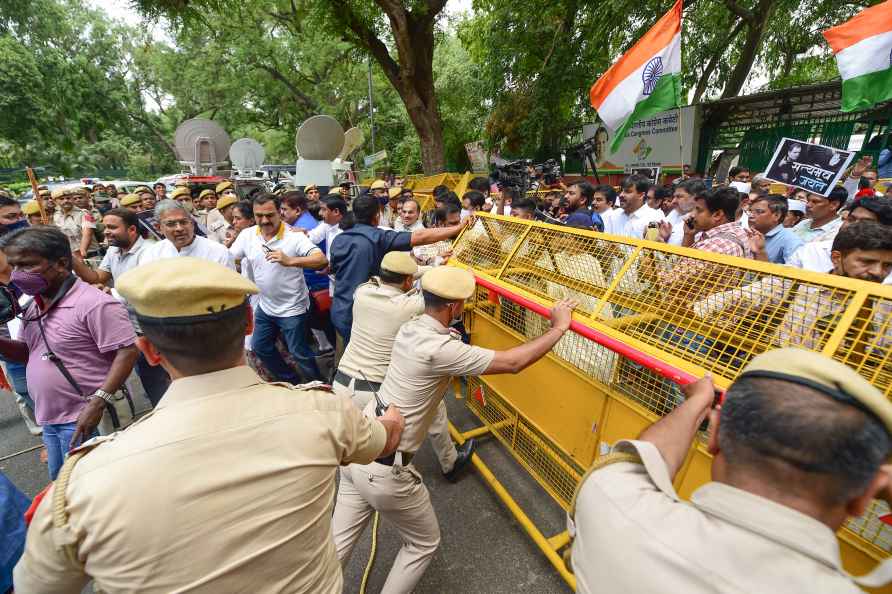 [New Delhi: Police stop Congress workers during a protest march at the AICC ahead of Rahul Gandhi's second appearance before the Enforcement Directorate (ED) in the National Herald case, in New Delhi, Tuesday, June 14, 2022. ( /PTI] New Delhi, June 14 : Ahead of former Congress president Rahul Gandhi's scheduled appearance before the Enforcement Directorate (ED) for the second day in connection with money laundering case involving National Herald, veteran party leader P. Chidambaram on Tuesday slammed the BJP and demanded a copy of the FIR. Taking to Twitter, the former finance minister said: "Will the learned spokespersons of the BJP please answer the following the questions, Which is the 'scheduled offence' under PMLA that has triggered an investigation by ED? " "Which police agency has registered an FIR in respect of the scheduled offence? Where is the FIR? Will you please show us a copy of the FIR? Did you know that absent a scheduled offence and absent an FIR, the ED has no jurisdiction to start an investigation under PMLA?" he added. Meanwhile, Congress accused the government of trying to suppress the voice of Rahul Gandhi who is raising people's issue. Just before his appearance at ED, Mr Gandhi tweeted a couplet of Kabir on his birth anniversary which meant that truth has nothing to fear. On Monday, Gandhi was questioned by agency officials for several hours. He was given a lunch break after three hours during which he went to meet his mother and Congress president Sonia Gandhi, who is undergoing treatment at Sir Ganga Ram Hospital. He then returned to the ED's headquarters where he was again questioned till late in the night. /IANS

CWG 2022: Nothing but gold will do well for Indian women's fours team after reaching historic final in lawn bowls
[**EDS: TWITTER IMAGE POSTED BY @Media_SAI ON MONDAY, AUG. 1, 2022** Rome: Indian players pose with their medals after the end of the U-17 World Wrest

CWG 2022: Ajay Singh misses out on medal by one kg, finishes at fourth place in men's 81kg final
[India's Ajay Singh makes a lift during the Men's 81kg Weightlifting Competition at The NEC on day four of the 2022 Commonwealth Games in Birmingham,