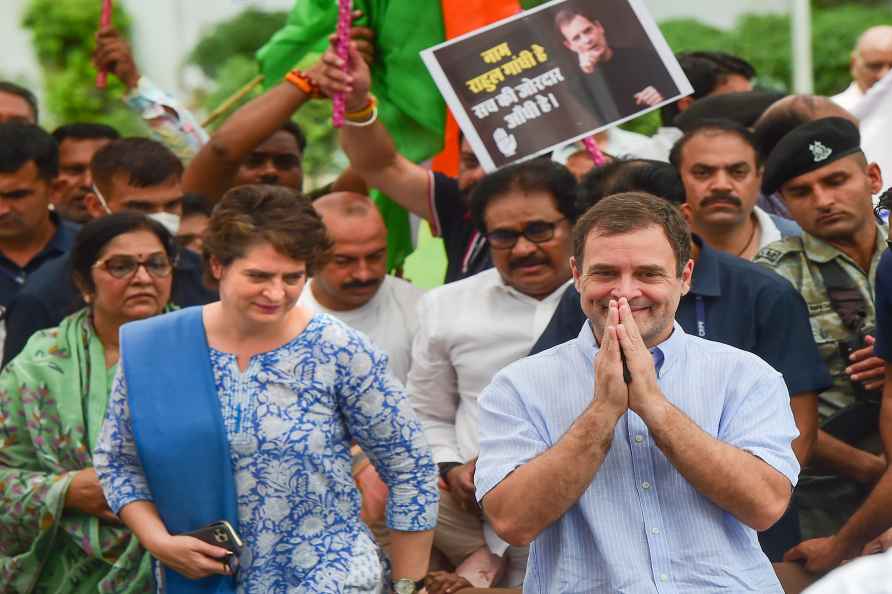 [New Delhi: Congress leaders Rahul Gandhi and Priyanka Gandhi arrives to meet party workers at the AICC headquarters before leaving for the Enforcement Directorate (ED) office to appear in the National Herald case, in New Delhi, Tuesday, June 14, 2022. ( /PTI] New Delhi, June 14 : Congress leader Rahul Gandhi on Tuesday appeared before the Enforcement Directorate (ED) in connection with the National Herald case for the second straight day. On Monday, he was grilled for about ten hours and was summoned again. Mr Gandhi reached the ED office at around 11.07 a.m. this morning and directly went inside without speaking to the media. A three-member team will interrogate him. Mr Gandhi's questioning ended at about 9 p.m. on Monday but he reportedly wanted to correct a few things in his statements for which he had to wait at the ED headquarters. In between the questioning, he was also given a lunch break duing which the Congress leader went to meet his ailing mother Sonia Gandhi who is undergoing treatment at Sir Ganga Ram Hospital. After meeting his mother, he returned to the ED's headquarters where the quuestioning resumed. Rahul Gandhi was questioned about a few transactions made by Dotex Merchandise Pvt Ltd, a Kolkata based firm. "Dotex firm allegedly paid Rs 1 crore to Young Indian. This was a loan which they gave to YI in 2010. The loan given by Dotex Merchandise was never returned. YI was just incorporated when this loan was paid," said a source. Congress President Sonia Gandhi has also been summoned im the matter. /IANS