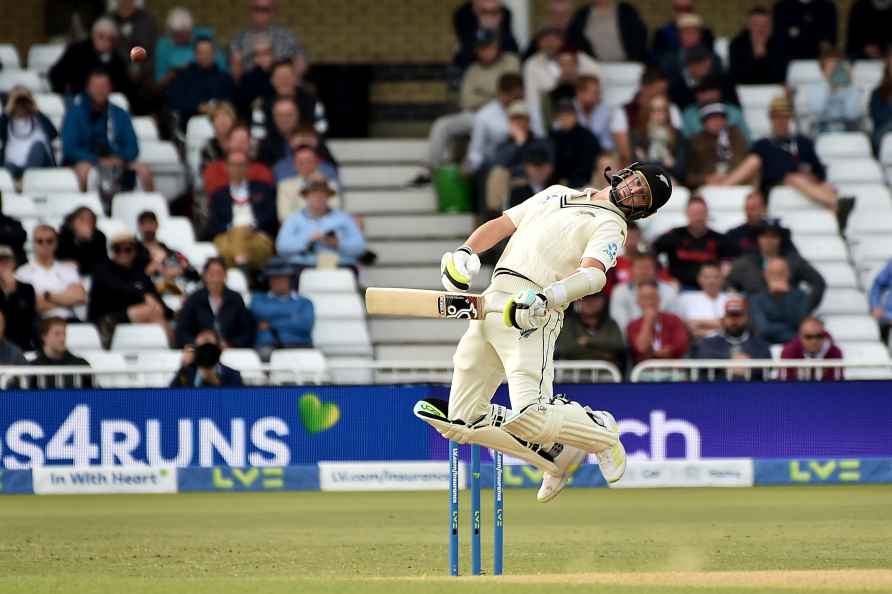 [New Zealand's Matt Henry avoids a rising delivery from England's Stuart Broad during the fourth day of the second cricket test match between England and New Zealand at Trent Bridge in Nottingham, England, Monday, June 13, 2022. /PTI] Nottingham, June 14 : England wicketlkeeper-batter Ben Foakes has said that winning the second Test on the final day on Tuesday might not be as easy as it might seem, adding the home team batters will look to "bat normally" and see how things go from there. The second Test at Trent Bridge looks set for a thrilling end on the last day after England bowlers restricted New Zealand to 224/7 -- an overall lead of 238 runs -- at stumps on Day 4 on Monday. With the likes of Joe Root and Ollie Pope in sublime form, and Foakes too chipping in with a half-century in the first innings, things look encouraging for the hosts to take a 2-0 lead in the three-Test series. But Foakes said the Test is still "in the balance" and his team could have done better in the first innings to take a handsome lead, but unfortunately ended 14 runs short of the Black Caps' first innings total of 553. "It's in the balance for Tuesday, got close (in the first innings) then some aggressive and poor-thinking cricket has left it in the balance," opined Foakes, who scored 56 in the first innings. "(We would like to) Bat normally (in the second innings), see how it is, then when (New Zealand) bowlers are tiring, you get scoring options," added Foakes. He expressed confidence that the charisma of former skipper Joe Root (176 in the first innings) will help the team bag the honours at Trent Bridge. "My main role was to stay with Rooty. When you're that good you can do what you want. That's the beauty of Test cricket, so many runs can be scored then things can happen fast. We are 1-0 up so they have to get back in the series. The whole vibe in the camp is brilliant, Baz (coach Brendon McCullum) is a pretty chilled guy and (captain Ben) Stokesy is similar. It rubs off on the team," he added. /IANS

Hitler too had won elections: Rahul
[New Delhi: Congress leader Rahul Gandhi with party leaders after being detained by police during a protest over price rise, unemployment and GST hike

Cong workers clash with police in Patna, stopped from going to Guv House
[Agartala: Police personnel try to stop Congress workers during their march towards Raj Bhavan as part of party?s nationwide protest over price rise a

Tesla to build 10-12 gigafactories in years to come: Musk

San Francisco, Aug 5 : Tech billionaire Elon Musk has hinted that Tesla would probably build "at least 10 or 12 gigafactories" in years to come, teasing another gigafactory location to be chosen later […]

Shimla: Farmers under the banner of Himachal Kisan Sabha stage a protest outside HP Secretariat, in Shimla, Friday, Aug. 5, 2022. ( /PTI […]