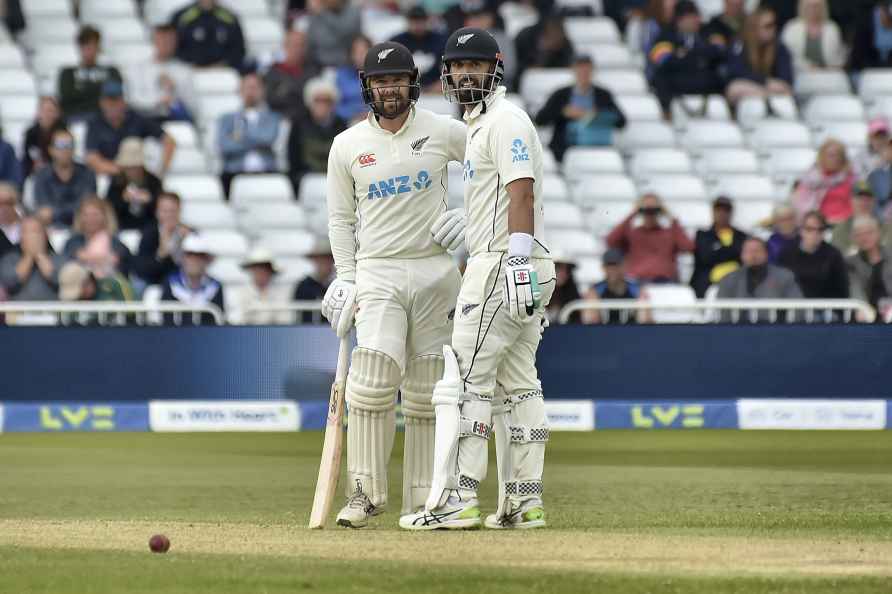 [Nottingham: New Zealand's Daryl Mitchell, right, stands with batting partner Tom Blundell to watch a review of Blundell during the fourth day of the second cricket test match between England and New Zealand at Trent Bridge in Nottingham, England, Monday, June 13, 2022. /PTI] Nottingham, June 13 : New Zealand's pace allrounder Kyle Jamieson on Monday has been ruled out of day four action in the ongoing second Test against England at Trent Bridge to determine the extent of his lower back injury through scans. On Sunday, during day three's proceedings, Jamieson pulled up during his 17th over while bowling in England's first innings with a lower back issue, described by the Blackcaps as a 'sharp pain' and was treated by the New Zealand medical staff after going off the field. "Kyle Jamieson won't take the field on day four as he awaits an MRI scan to determine the extent of the injury to his lower left back. Jamieson experienced sharp pain while bowling in the final session of day three forcing him from the field," said an official statement by New Zealand Cricket (NZC) through their Twitter account. Despite the absence of Jamieson, who had figures of 0/66 in 16.3 overs before going off the field, New Zealand were able to bowl out England for 539, taking a 14-run lead. Left-arm pacer Trent Boult took his tenth five-wicket haul in Test cricket, 5/106 in 33.3 overs while debutant all-rounder Michael Bracewell took 3/62 with his off-breaks. At lunch, New Zealand are 27/1 in nine overs, leading by 41 runs. /IANS

[India's Harmeet Desai and Sathiyan Gnanasekaran return to Singapore's Yong Izaac Quek and Yew En Koen Pang, during The Men's Gold Medal match, at The NEC on day five of the 2022 Commonwealth Games in […]