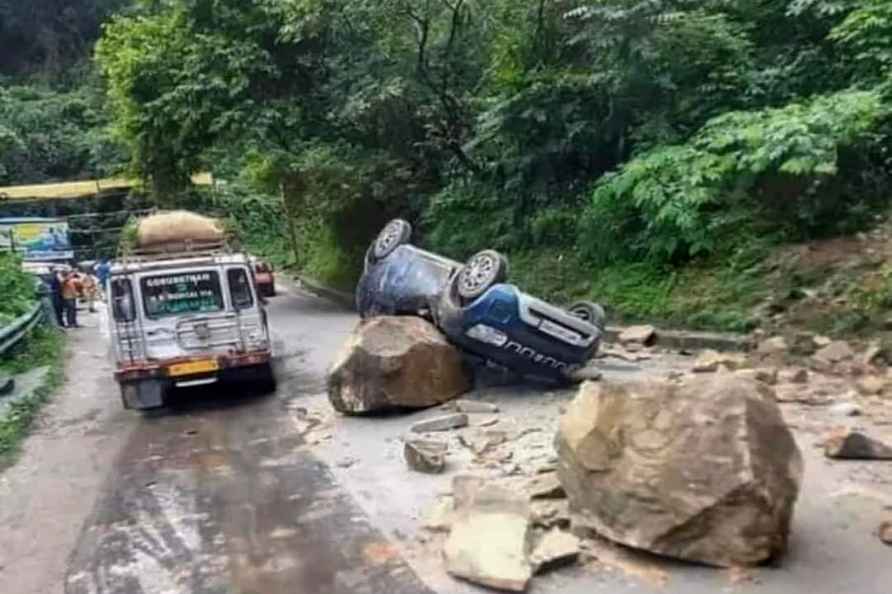 [Siliguri: Mangled remains of a car after a rock fell on top of it, because of a landslide near Kali Mandir on Sewak Road, in Siliguri, Sunday, June 12, 2022. The car was vacant at the time of the mishap and all the family members survived. ( /PTI] Patna, June 12 : At least 20 people have been killed in road accidents at seven places in Bihar on Saturday, officials said. In Purnea district, at least nine persons lost their lives after a Mahindra Scorpio overturned and fell into a water pit. The car occupants, unfortunately, were unable to get out of the vehicle, and were drowned to death. The Scorpio occupants were returning from a marriage function and the driver of the vehicle lost control due to over-speeding. In another accident, three persons were mowed down by a speeding oil tanker in Danapur area in Patna district. The victims died on the spot. The third accident took place in Araria district when three youth riding a motorcycle met with an accident at Dholbajja area. All the three died on the spot. They were on the way to attend a marriage function. One of the deceased was the groom's brother. The fourth mishap appeared at Pali Mor in Jahanabad district on NH-110 when a speeding car rammed a bike. One person died on the spot while two others were critically injured and referred to PMCH Patna. The fifth accident occurred in Banka district when a speeding container truck rammed on to an Alto car that was coming from the opposite direction. The accident happened in Leelawaran village. One Alto occupant died on the spot while two others were referred to Bhagalpur medical college and hospital for treatment. The sixth accident occurred in Sheikhpura district when two persons were mowed down by a vehicle in Basant village. Also, in Jamui district, a 5-year-old child died when an e-rickshaw overturned. Three persons were also injured in that mishap. Following the deaths in road accidents, Bihar Chief Minister Nitish Kumar has expressed condolence to the families of the deceased. He also announced Rs 4 lakh each to the family members of the deceased. /IANS

IANS Explainer: The nature of freebies promised by political parties
[Pilot Garrett Fleishman tapes the doorway of the Placid Lassie, a vintage C-47 plane, so the sharp edges will not rip the paratroopers' static lines

Thiruvananthapuram, Aug 13 : Even as Kerala Governor Arif Mohammed Khan has asked Kannur University Vice-Chancellor for a report on alleged irregularity in the appointment of the wife of Chief Ministe […]

One killed as tanker runs amok in Andhra

Amaravati, Aug 13 : A home guard was killed and another person injured when a tanker ran amok in Andhra Pradesh's Kakinada district on Saturday. The incident occurred on national highway at Bend […]