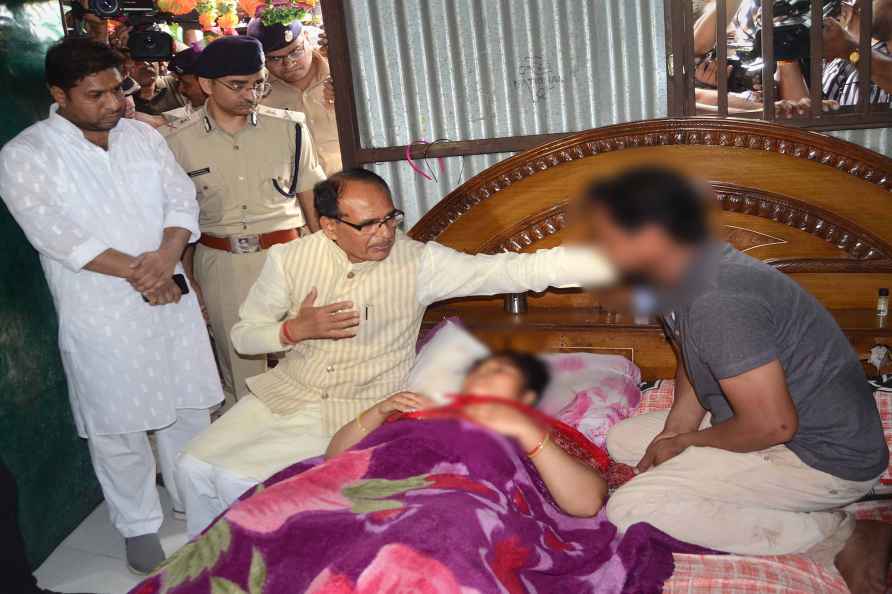 [Bhopal: Madhya Pradesh Chief Minister Shivraj Singh Chouhan meets the woman who was allegedly attacked with a blade after she was harassed by some miscreants, at her residence in Bhopal, Sunday, June 12, 2022. ( /PTI] By Praveen Dwivedi Bhopal, June 12 : Madhya Pradesh Chief Minister Shivraj Singh Chouhans offer to elect gram panchayat representatives unopposed and get monetary rewards ranging from Rs 5 lakh to Rs 15 lakh during the ongoing three-tire panchayat elections has received good response from the people of the state. As many as 496 gram panchayats across the state have so far elected their representatives unopposed. Up to 75 per cent have elected women for the post of Sarpanch or for the entire panchayat panel (including Sarpanchs and Panchs), as per the data provided by the State Election Commission (SEC). Officials said that this number will go up in the coming days which can be at least around 1,000-1,500 by the end of the polls. In total, there are 23,012 gram panchayats across 52 districts of the state, out of them elections would be held to elect the representatives of 22,921 panchayats as the tenure of the remaining 91 panchayats will end by November. Narmadapuram (Hoshangabad) district is on the top of the list where 36 gram panchayats elected their representatives unopposed; Sagar district stood second with 35 gram panchayats electing their representatives unopposed. As per the data provided by the SEC, Chief Minister Chouhan's home district Sehore is placed third with 33 gram panchayats electing their representatives unopposed with unanimous consensus, while Harda district in in fourth position with 32 gram panchayats doing the same. Some other districts where the representatives of gram panchayats have been elected unopposed are Chhindwara (29), Jabalpur (26), Seoni (22), Shivpuri (11) and Guna (10), among others. The three-tier panchayat polls in the state will be held in three phases between June 25 and July 8. The gram panchayats that elect their representative unopposed would be considered as 'Samras Panchayats' and will be given special incentives. Chouhan on May 27 had announced that if a sarpanch is elected by consensus, an incentive of Rs 5 lakh will be provided to that panchayat, Rs 7 lakh if the entire panchayat is elected unopposed and Rs 12 lakh if a woman representative gets elected unopposed. "Similarly, if women are elected unopposed to all the posts (Sarpanch and Panchs) in the panchayat, an incentive amount of Rs 15 lakh will be provided to the panchayat. Development projects of such panchayats will get priority," Chouhan had announced. The first such instance came to light when villagers under the Singayai panchayat of Aaron in Guna district elected women representatives to all 12 posts, including Lalita Singh, wife of former Chambal dacoit Malkhan Singh, as Sarpanch. A senior IAS officer, posted in the higher education department of the state government, believes that gram panchayat elections are more critical these days as closely connected people become opponents during the elections. "In villages, people are socially, culturally connected with each other. But, it is also a fact that in the race for grabbing the posts (Panchs and Sarpanch) and for their social dignity, even neighbours turn into enemies of each other," the officer said, requesting anonymity. Citing her own experience as an election supervisor in the panchayat election in Assam, a few years back, the officer said: "The biggest challenge was to conduct a peaceful election. Because, people who live under one roof and are neighbours or relatives, sometimes stood to oppose each other and this creates a critical situation for officials on election duty." IANS also sought views on whether this trend of electing panchayat representatives without elections (unopposed) would have some positive impact or will it give rise to some other challenges for the society in future. A senior official in MP-SEC said: "It is the duty of the Elections Commission to conduct fair polls at all levels in accordance with the Constitution of India. Election is a crucial process in a democratic system that provides equal rights to every citizen." /IANS

After 49 years, a direct appointee from the Bar set to become the Chief Justice
[**EDS: TO GO WITH STORY LGD 8** New Delhi: Chief Justice of India N V Ramana with Justice Uday Umesh Lalit during a meeting, in New Delhi, Thursday

Beijing, Aug 4 : Starting from Thursday, China has said that it will carry out five days of "necessary and just" military drills in the seas around Taiwan following US House Speaker Nancy Pelosi's tri […]

US Representative killed in car crash

Washington, Aug 4 : Jackie Walorski, a US Representative from Indiana, and her two aides were killed in a car crash when the vehicle they were in was struck by another, according to the Elkhart County […]

Reykjavik, Aug 4 : Emergency plans were activated in Iceland after a volcano erupted, with glowing lava flows bubbling up in an event that was widely expected after a flurry of seismic activity. […]