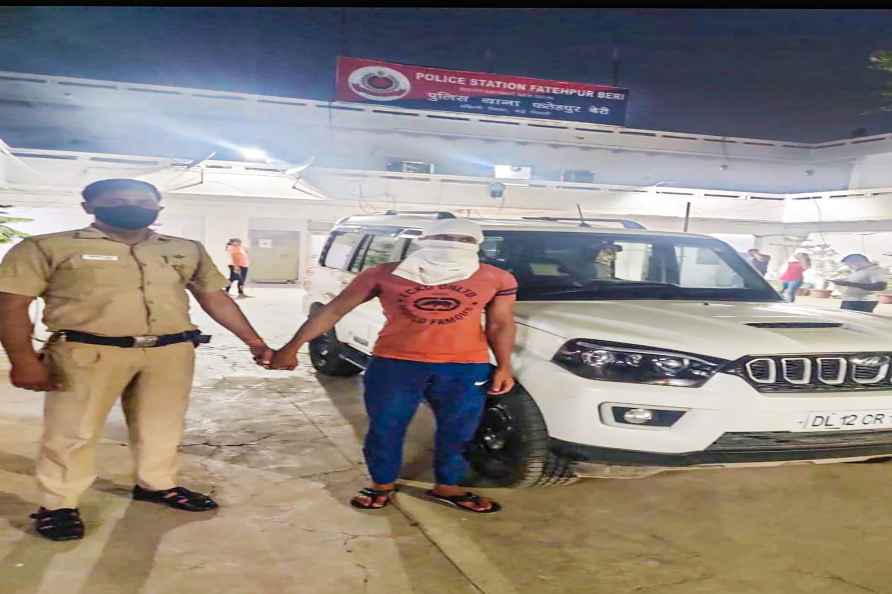 [**EDS: HANDOUT PHOTO MADE AVAILABLE FROM DELHI POLICE ON MONDAY, JUNE 6, 2022** New Delhi: Delhi police personnel arrest the accused driver who hit a biker with his four-wheeler following a heated verbal exchange with the biker group, near Arjan Garh metro station on Sunday, in New Delhi. ( /PTI] New Delhi, June 6 : A video showing a rashly-driven SUV hitting a biker in the national capital went viral on social media on Monday, prompting the Delhi Police to take cognisance of the accident. According to sources, the incident took place on Sunday in the Arjan Garh area when a group of bikers were riding their motorcycles. In the video, the bikers could be seen getting into an argument with an SUV (Mahindra Scorpio) driver simultaneously while riding their bikes. In the 45-second clip posted by Anurag R. Iyer, the Scorpio could be seen driven rashly by the driver in the last 10 seconds and subsequently hitting one of the bikers. The biker, identified as Shreyansh (20), fell down from his motorcycle and collided with railing across the road. As the biker was wearing a helmet, he received minor bruises and his life was saved. "Please help us, the Scorpio driver almost killed a few of our riders and threatened to kill us by crushing us under the car. This is not what we vote for or pay taxes for. No one was severely injured. Gears respect riders," Iyer wrote on Twitter. Meanwhile, Additional DCP (south) Harsh Wardhan said they took note of the incident through social media and contacted the rider. "A PCR call was also received at Fatehpur Beri police station at 7.30 am on Sunday," the official said. He said that prima facie it looked like the Scorpio driver deliberately hit the motorcycle. "We have registered a case under Section 307 (attempt to murder) of the IPC at the Fatehpur beri police station," the official said, adding that that the accused has also been identified. However, no arrests have been made so far. /IANS

Jerusalem, Aug 3 : Israel has approved a plan to allow Palestinian passengers to use Ramon International Airport in southern Israel, a local news site reported. The first charter flight for Pale […]