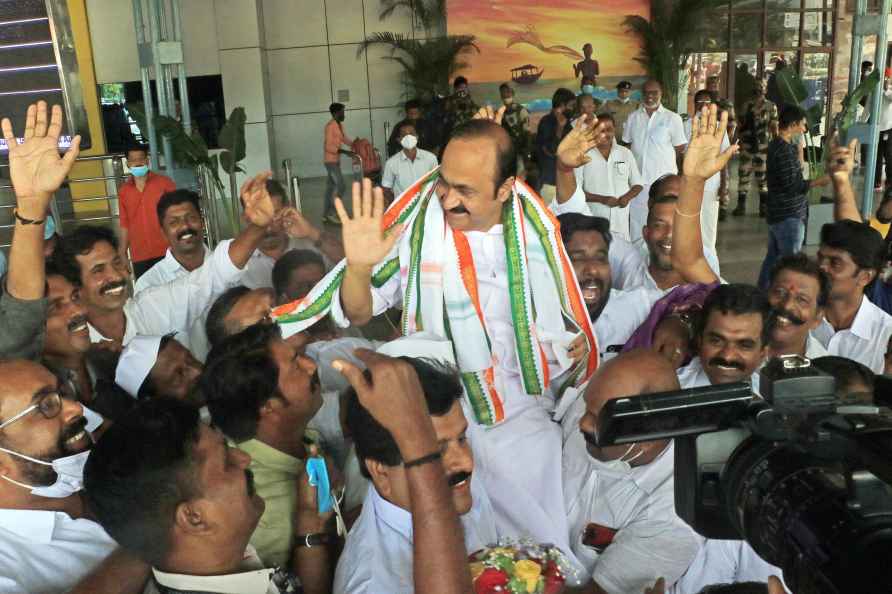 [Thiruvananthapuram: Congress workers lift Opposition Leader VD Satheesan during a reception at the Thiruvananthapuram International airport as they celebrate their victory in the Thrikkakara by-election, in Thiruvananthapuram, Monday, June, 6, 2022. ( /PTI] Thiruvananthapuram, June 6 : After leading his party candidate to a thumping victory in the Thrikkakara by-election, Leader of Opposition V.D.Satheesan on Monday landed in the state capital airport to a rousing welcome from the Congress workers. Incidentally, Thrikkakara constituency is in Ernakulam district -- the home town of Satheesan. The Congress leader said that after the victory he does not know why was he was being called a 'captain and leader'. "There is only one leader in the Congress and it's Karunakaran. I am no leader and I don't need such titles. The Congress candidate won at Thrikkakara only because of the excellent team work. Every single leader of our party played a sigficant role in the victory and so did every party worker. This is Congress's victory," he said. Uma Thomas, the wife of Congress legislator Thrikkakara P.T.Thomas, won a stellar victory with the highest margin ever recorded (25,016) when votes was counted on Friday. Satheesan also pointed out that he has directed to remove of all the hoardings depicting the Thrikkakara victory which has only his picture. "I have asked all such hoardings to be removed as this is not my victory. Only the hoardings that has pictures of all our leaders will be kept," added Satheeshan. He said that this is just the beginning only. "We are calling a meeting of all our leaders to chart the future course of action. There is a lot of work that has to be done and we will not be sitting on this victory," said Satheesan. The first opposition onslaught against Chief Minister Pinarayi Vijayan by the opposition is expected when the new session of the Kerala Assembly begins later this month with the swearing in of Uma Thomas. /IANS

By Quaid Najmi Satara (Maharashtra), Aug 14 : Satara's tiny Apshinge -- also known as the 'army village' -- is renowned for its huge contribution to the country's military establishments in its mor […]

By Sheikh Qayoom/Quaid Najmi Srinagar/Mumbai, Aug 14 : Decked with the national flag, the 'Golden Joint' of the Chenab railway bridge was launched on Saturday thereby inaugurating the World's highes […]

Srinagar, Aug 14 : Jammu and Kashmir Lieutenant Governor Manoj Sinha paid homage to the 'Lion of Baramulla', Maqbool Sherwani and the brave soldiers of Sikh Regiment who made the supreme sacrifice to […]