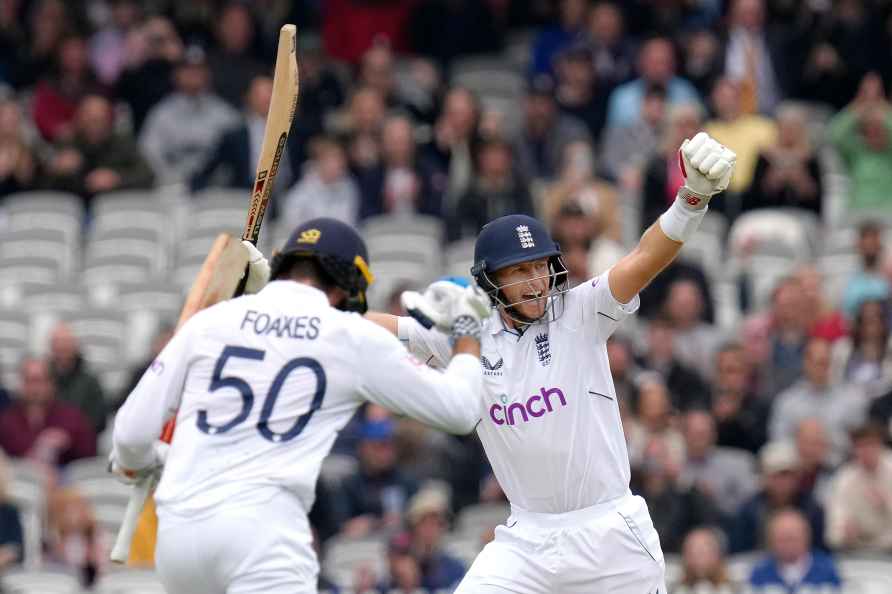 [England's Joe Root, right, and England's Ben Foakes celebrate as England win by five wickets on the fourth day of the test match between England and New Zealand at Lord's cricket ground in London, Sunday, June 5, 2022. /PTI] London, June 5 : Joe Root finished unbeaten on 115 and also crossed the 10,000-run mark in the longest format of the game as England wrapped a five-wicket victory over New Zealand on day four of the opening Test at Lord's on Sunday. With Ben Foakes (32 not out) playing an important role from the other end, Root helped England knock off the remaining 61 runs to take a 1-0 lead in the three-match series. The victory also marked the winning start of Ben Stokes-Brendon McCullum era as captain-head coach in Test cricket for England. With a flick through leg-side for a brace against Tim Southee, Root completed his 26th Test hundred and also crossed the 10,000 Test runs milestone, becoming only the 14th cricketer and just the second Englishman after Sir Alastair Cook to achieve the landmark. At 31 years, five months and five days, Root has reached 10,000 Test runs landmark at exactly the same age as Cook - making the English pair the joint-youngest players to reach the milestone. Other batters to reach the milestone include Sachin Tendulkar, Ricky Ponting, Jacques Kallis, Rahul Dravid, Kumar Sangakkara, Brian Lara, Shivnarine Chanderpaul, Mahela Jayawardene, Allan Border, Steve Waugh, Sunil Gavaskar and Younis Khan. "I was so glad I was here to witness that - an unbelievable knock by an unbelievable player. He is the most complete England batsman in all forms. It is absolutely mad that it is exactly the same age. I am happy to call it a draw," said Cook on BBC Test Match Special after Root entered the 10,000-run club on the back of a brilliant unbeaten knock under pressure, especially when England were 69/4 in a chase of 277. Resuming from 216/5 under overcast skies and needing 61 runs with five wickets in hand, England avoided any dismissals as Root and Foakes settled quickly. As Foakes got the runs through boundaries, Root, resuming from 77, entered the 90s on the back of good running between the wickets and a crisp straight drive. Root swiftly brought up his century off 156 balls, to thunderous applause from fans, home as well as away dressing rooms. Root smacked Southee for three boundaries, including the last one pulled fiercely through mid-wicket, to seal an outstanding win for England after see-saw first three days. It also meant Root put a full stop to chances of the second new ball coming for New Zealand's crafty bowling attack. Root left the field to rapturous applause from the crowd, going a little emotional on his way back to the dressing room on an unforgettable day for the ex-England skipper. Brief Scores: England 141 in 42.5 overs and 279/5 in 78.5 overs (Joe Root 115 not out, Ben Stokes 54, Kyle Jamieson 4/79) beat New Zealand 132 in 40 overs and 285 in 91.3 overs by five wickets /IANS

Reed Neely of Sanger, Cal., competes in the saddle bronc during ...

People look at the lava flowing on Fagradalsfjall volcano in Iceland on Wednesday Aug. 3, 2022, which is located 32 kilometers (20 miles) southwest of the capital of Reykjavik and close to the interna […]

England's Katarina Johnson-Thompson, right, reacts after winning the gold medal in the Heptathlon during the athletics in the Alexander Stadium at the Commonwealth Games in Birmingham, England, Wednes […]

Vice President Kamala Harris, right, speaks in the Indian Treaty Room on the White House complex in Washington, Wednesday, Aug. 3, 2022, on securing access to reproductive and other health during the […]