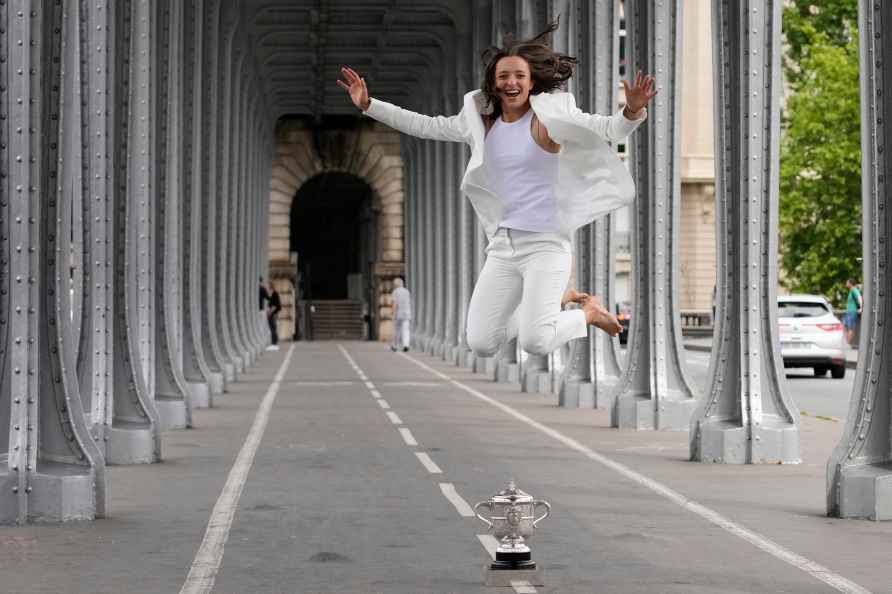 [Poland's Iga Swiatek jumps next to her trophy in Paris, France, Sunday, June 5, 2022, after she won Saturday's women's final match at the French Open tennis tournament in Roland Garros stadium. /PTI] Paris, June 5 : Young American tennis player Coco Gauff was a picture of grit and determination after losing the Roland Garros women's singles final to Iga Swiatek of Poland, saying she knew what had to be done to beat the world No. 1, and added that the next final between the two would hopefully produce "a different result". A flawless Swiatek capped her superb clay-court season on Saturday, winning her second French Open singles title beating No. 18 seed Gauff 6-1, 6-3 in the final. Two years ago, Swiatek shocked the field by winning her first Roland Garros title as an unseeded teenager. This time, the Polish star claimed her second French Open title by winning a staggering 35th consecutive match, tying Venus Williams for the best winning streak this century. Venus' historic run of 35 straight victories came in 2000. If Swiatek manages to win her next match, she will hold the best winning streak of the century alone, and tie Monica Seles's 36-match run from 1990. Another victory after that would tie Martina Hingis's 37-match winning streak from 1997. Swiatek also becomes only the 10th woman to win multiple Roland Garros singles titles in the Open Era (since 1968). Having just turned 21 on Tuesday, Swiatek is the fourth-youngest player to triumph more than once in Paris -- only Monica Seles, Stefanie Graf, and Chris Evert were younger when they did so. However, Gauff refused to get overawed by the Polish star's exploits, saying post-match, "Now that I have seen the level, this level of No.1 and 35 matches (won in a row by Swiatek), I know that what I have to do. I'm sure I'm going to play her in another final and hopefully it's a different result. "I feel like throughout my career, and even in juniors, the reason I had success so early is that I was able to see that level and then go back and practice and try to reach that level," Gauff was quoted as saying by wtatennis.com. Gauff burst on the scene as a 15-year-old qualifier at 2019 Wimbledon, where she defeated Venus Williams in her Grand Slam debut and became the youngest woman ever to advance to the second week of a major. The pressure and expectations have since grown, and Gauff's run to her maiden major final went a long way in silencing the doubters who felt she might not be able to replicate her 2019 form. "I just think even when I was 15, 16, 17, I felt like so much pressure to make a final. Now that I made it, I feel like a relief a little bit. I definitely feel like this helped my confidence a lot," Gauff said. "I just think even when I was 15, 16, 17, I felt like so much pressure to make a final. "Now that I made it, I feel like a relief a little bit." Gauff will take the experiences of covering new ground at a major when she plays the Wimbledon next. "I guess the journey to get here, I realized the key to making the final was not something with my game or something that I needed to fix," Gauff said. "It was more with my mentality and how I entered the matches. I think that's what I think the difference between me dreaming it and reality, I realised that, yes, it's hard to get here, but also, it's not like some master puzzle that you need to solve. You just kind of have to get your mind in the right place. "I think over the years watching other players get to the semis and you see that sometimes they kind of freak out, or in the final and they kind of freak out. A lot of times I feel like they think it's something wrong with their game or this shot isn't working. Really, it's not." Gauff said she was surprised by how she handled the occasion of her first major final. "In the match it probably looked like I was freaking out, but really it was just Iga was too good," Gauff said. "I wasn't freaking out. So I think the moment, I wasn't as nervous as I thought I was going to be," said Gauff, who will leave Roland Garros with a new career-high ranking of No.13. /IANS

'Evolving away from tennis': Serena Williams hints at retirement after US Open
[FILE - Serena Williams holds her daughter Alexis Olympia Ohanian Jr., and the ASB trophy after winning her singles finals match against Jessica Pegul

Ahmedabad, Aug 9 : The India Meteorological Department has forecast heavy to very heavy rains for South Gujarat and Saurashtra region for next three days. Due low pressure development in the Bay […]

Chennai, Aug 9 : Actor Karthi has disclosed that Aditi Shankar, the daughter of ace director Shankar Shanmugam who makes her debut as an actress with his film, 'Viruman', was a down-to-earth, simple p […]

Couple shot dead in UP district

Hathras, Aug 9 : A couple was shot dead on Tuesday by unidentified assailants using a country made firearm in Uttar Pradesh's Hathras district. The incident took place at 2.30 a.m. when Rajesh K […]