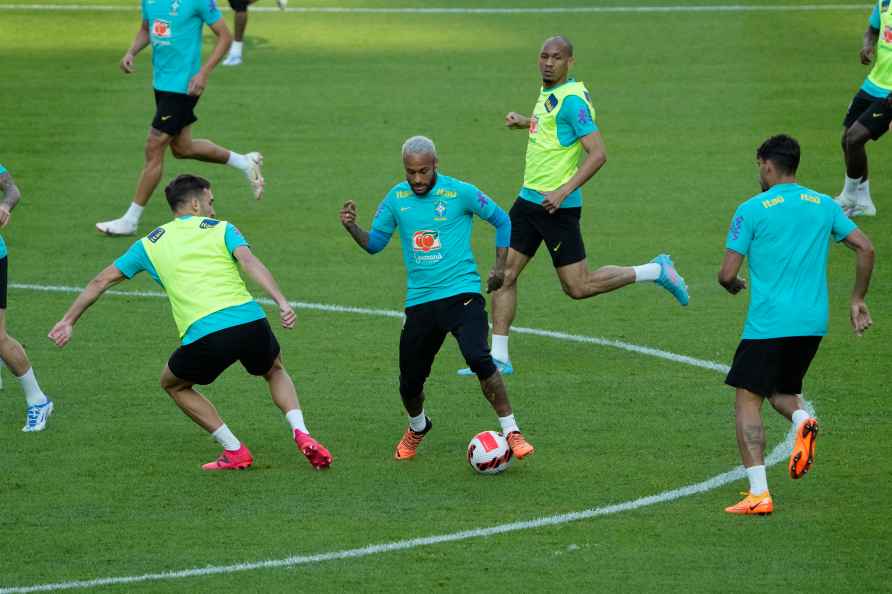 [Brazil's Neymar, center, exercises during a training session at Seoul World Cup stadium in Seoul, South Korea, Wednesday, June 1, 2022. Brazil national soccer team will play a friendly soccer match against South Korea on June 2. /PTI] London, June 1 : A new-look England side will look to turn around their red-ball fortunes when they take on reigning World Test champions New Zealand in the opening game at Lord's on June 2. England have had quite a momentous build-up to the three-Test series, with former New Zealand skipper Brendon McCullum becoming their new head coach and all-rounder Ben Stokes replacing batting stalwart Joe Root as captain. With the hosts at the bottom of the nine-team World Test Championship (WTC) table and the Kane Williamson-led Black Caps too in an unenviable position at No.6, both teams would be looking at valuable WTC points in order be in contention for the 2023 final. It's an irony that both McCullum -- who quit his head coach's job with IPL franchise Kolkata Knight Riders at the end of the 2022 season to take up the England assignment -- and Stokes were born in New Zealand, with cricket analysts expecting the duo to gel as England begins a new era in Test cricket. McCullum and Stokes are both known for their attacking instincts, and fans would be expecting England to play some exciting brand of cricket as they attempt to work their way back into WTC contention. England have managed just one Test victory over the last 12 months under former skipper Joe Root and, in a bid to revive their fortunes in the five-day game, the selectors have recalled experienced seamers James Anderson and Stuart Broad to the side. Stokes has also confirmed he will bat at No.6, with Root to return to his preferred position at No.4, a move that will also likely bolster the middle-order. Their quest for victory will not be easy though, despite the Black Caps' own struggles during the current WTC cycle. The Kane Williamson-led side could only manage draws in the two home Test series against Bangladesh and South Africa, which means the defending World Test champions would be hungry for victories. The team has done well in English condition, having defeated the-then Virat Kohli-led India in the inaugural World Test Championship final at Southampton last year after overwhelming England by eight wickets in the second match of the two-Test series at Birmingham. Ahead of the Lord's Test, seamer Broad said that there "is an exciting feel" to the England side. "We have only been together as a squad since Monday morning. Brendon (McCullum) and Stokesy (Ben Stokes) have led one training session and we go again this afternoon. There is an exciting feel to the group. We went to St George's Park last week for a couple of days and the team meal that night there was a lot of energy and a lot of focus to get going for an international summer," said Broad, who was dropped for the three-Test away series against the West Indies before being brought back for the New Zealand games. New Zealand coach Gary Stead said, "It's a 50 per cent chance for both teams of winning the game when you start. It's just winning small moments and then the result will look after itself." New Zealand quick Trent Boult is not expected to play in the first Test as he has just returned from playing the IPL final for Rajasthan Royals, while Henry Nicholls has issues with his calf and is in a race against time to prove his fitness. Michael Bracewell will be on standby. England have named a 13-man squad for the first two Tests, leaving out Rory Burns, Dom Sibley, Haseeb Hameed and Dawid Malan. Alex Lees has been recalled, while Harry Brook and Matthew Potts could make their Test debuts. /IANS

Hitler too had won elections: Rahul
[New Delhi: Congress leader Rahul Gandhi with party leaders after being detained by police during a protest over price rise, unemployment and GST hike

Fire at a chemical factory in Kanpur