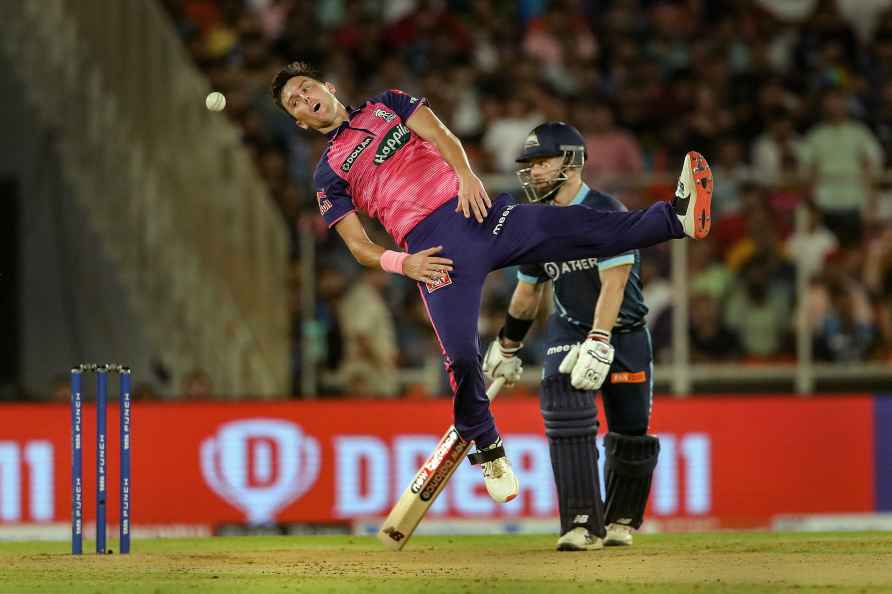 Mumbai, June 1 : IPL 2022 runners-up Rajasthan Royals have marvelled the commitment and motivation of their pace bowler Trent Boult, who, after playing the final against Gujarat Titans at the Narendra Modi Stadium in Ahmedabad on Sunday (May 29), was at Lord's on May 31 preparing for New Zealand's opening Test against England. While there is uncertainty over whether the New Zealand pace bowler will be in the Kane Williamson-led side's opening Test, given that he has hardly had time to acclimatise to the English climate and also probably lacks the fitness for playing a five-day game as he had been in the IPL bubble for more than two months, there was no lack of commitment on Boult's part as he boarded the long-haul fight to London immediately after the IPL final to do national duty. The Royals tweeted a collage of two images, the first showing the 32-year-old stretching all the way across the pitch to stop runs off his own bowling in the final (May 29), and the other showing him bowling at the nets in London (May 31). Along with the image, the Royals tweeted, "100 per cent Motivation level: Trent Boult!" Boult bagged 16 wickets in 16 games for the Royals this season with a best of 2/18. Royals fans were quick to give their views on the player, with a netizen saying, "that's not motivation admin, this is love for Test cricket." Another wondered whether it was "dedication or motivation". /IANS

Tickner, Sears demolish Netherlands as New Zealand take 1-0 lead in T20I series
The Hague, Aug 5 : A fine 45 by Martin Guptill at the top of the batting order and a four-wicket haul from pace bowler Blair Tickner helped New Zealan