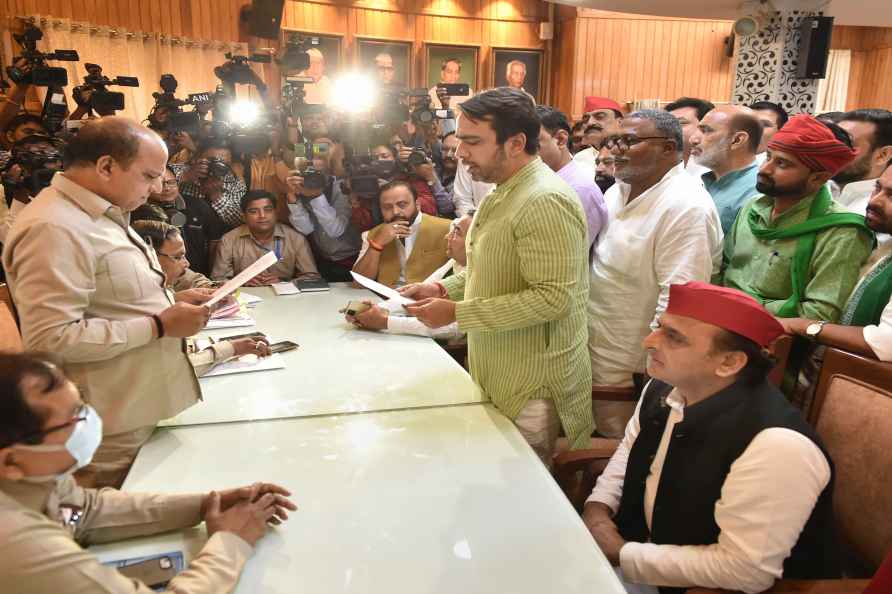 [Lucknow: Rashtriya Lok Dal President Jayant Singh Chaudhary files his nomination papers for Rajya Sabha with the support of Samajwadi Party, at Vidhan Bhawan in Lucknow, Monday, May 30, 2022. Samajwadi Party President Akhilesh Yadav is also seen. ( /PTI] Lucknow, May 30 : Rashtriya Lok Dal (RLD) president Jayant Chaudhary filed his nomination papers as a joint SP-RLD candidate for the Rajya Sabha on Monday. Jayant was accompanied by Samajwadi President (SP) president Akhilesh Yadav when he came to file his nomination papers. "I am grateful to Akhilesh Yadav for his party's support to my candidature and I assure that I will raise relevant issues in the Rajya Sabha," he told the reporters. By announcing support to Jayant Chaudhary, the Samajwadi Party has made the first move to cement the SP-RLD alliance for the Lok Sabha elections. Akhilesh Yadav, meanwhile, said that this was an extension of the SP-RLD friendship. Jayant Chaudhary will be the third candidate supported by the Samajwadi Party for the Rajya Sabha biennial elections. The party has already announced its support for Kapil Sibal, who is contesting as an independent candidate. Another SP nominee is Javed Ali. The RLD has eight MLAs in the Uttar Pradesh Assembly and a candidate needs 37 votes to win the seat. The Samajwadi Party has 111 MLAs. /IANS

After 49 years, a direct appointee from the Bar set to become the Chief Justice
[**EDS: TO GO WITH STORY LGD 8** New Delhi: Chief Justice of India N V Ramana with Justice Uday Umesh Lalit during a meeting, in New Delhi, Thursday

Dhaka, Aug 4 : Bangladesh's inflation decreased to 7.48 per cent in July from 7.56 per cent in June, according to the latest data. While revealing the data on Wednesday, Planning Minister MA Man […]

Canberra, Aug 4 : Large sections of Asutralia's Great Barrier Reef (GBR) now have an unprecedented amount of coral, according to a new report published on Thursday. The Australian Institute of M […]

US probes reports of Sikh turbans being confiscated at Mexico border

Washington, Aug 4 : US authorities have said investigations were underway into reports that turbans of Sikh asylum seekers were confiscated after they were detained at the country's border with Mexico […]

Seoul, Aug 4 : Speaker of South Korea's National Assembly Kim Jin-pyo met visiting US House Speaker Nancy Pelosi on Thursday amid heightened tensions between Washington and Beijing in the wake of her […]