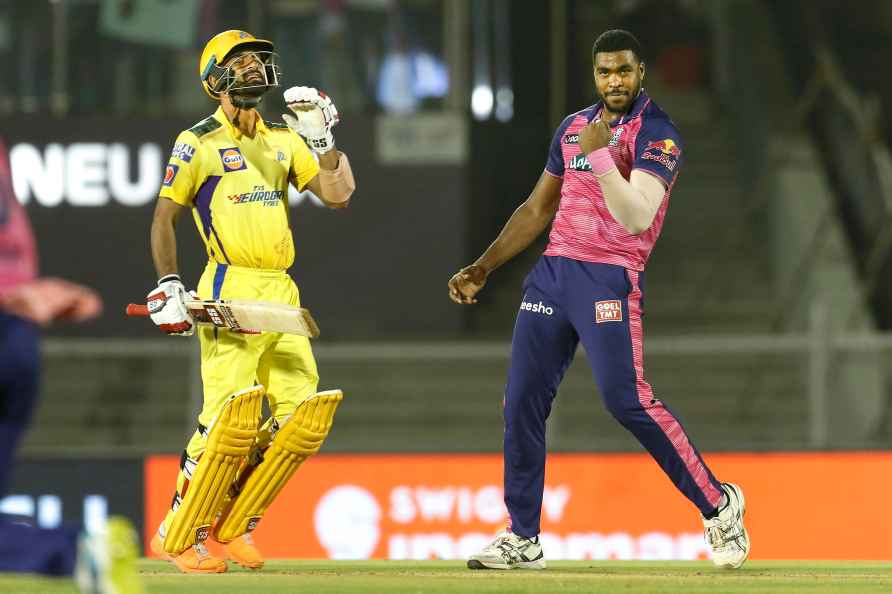 [Mumbai: Obed Mccoy of Rajasthan Royals celebrates the wicket of N. Jagadeesan of the Chennai Super Kings during T20 cricket match 68 of the Indian Premier League 2022 (IPL season 15), between Rajasthan Royals and Chennai Super Kings, at the Brabourne Stadium (CCI) in Mumbai, Friday, May 20, 2022. (Sportzpics for IPL/ /PTI] Mumbai, May 20 : For inaugural IPL champions Rajasthan Royals, the equation is pretty straightforward in their last league match of 2022 season against the Chennai Super Kings at the Brabourne Stadium on Friday. A win would set up their showdown against Gujarat Titans in the Qualifier 1 on May 24. But if they lose, they would end up in the Eliminator to be held a day later. The chances for Rajasthan to click in all departments of the game against Chennai have been further boosted by the return of their finisher Shimron Hetmyer, who missed the last two matches due to the birth of his child. With all members of the squad available for Rajasthan, former South Africa skipper Graeme Smith feels that the men in pink and blue should look to put up a comprehensive show against Chennai to sign off from the league stage of IPL 2022 on a high. "They've played good cricket, they've found the form. Hetmyer is back after the birth of his first child so that's a positive. They would just be hoping that they click in all the departments against CSK. The top two will need to give them a good start," said Smith on Cricket Live show on Star Sports. Further talking about the flying start Rajasthan will need against Chennai, Smith specifically backed opener and top run-scorer Jos Buttler (627 runs in 13 matches at 52.25) to get another dominating knock. "Jos Buttler should look to get another big knock under the belt. We've all talked about the importance of finishing in the top two and giving yourself an extra chance of playing in the knockouts. So that will be key for Rajasthan as well." Agreeing with Smith's views, former India off-spinner Harbhajan Singh stated that it will be a disappointment for Rajasthan if they don't emerge victorious over Chennai and miss out on finishing in top two of points table. "It is a golden chance for Rajasthan Royals to finish in the top two and give them an extra shot at fighting for the trophy. Beating Chennai Super Kings is never easy for any team but Royals will be disappointed if they fail to win as they'll lose the opportunity." /IANS

'Imran had fascist plans to extend his rule for 15 yrs'

Islamabad, June 19 : Pakistan's Minister for Power Khurram Dastagir claimed that ousted Prime Minister Imran Khan had "fascist plans" to extend his rule for 15 years by getting the entire leadership o […]

Sasikumar's 'Kaari' trailer gets over 2 million views in a day

Chennai, June 19 : The trailer of director Hemanth's upcoming action thriller 'Kaari' starring actor Sasikumar in the lead, has garnered a whopping two million views in just a day of being released on […]