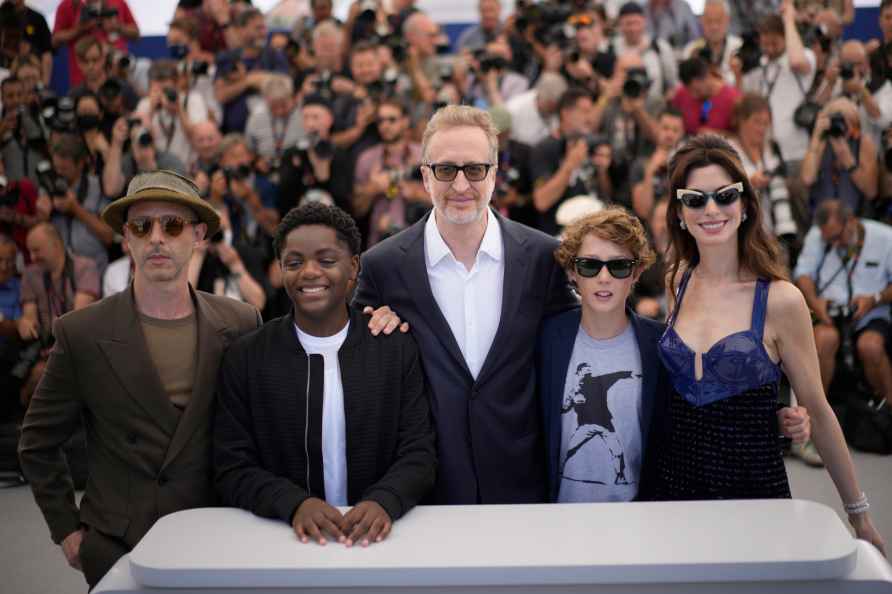 [Jeremy Strong, from left, Jaylin Webb, director James Gray, Michael Banks Repeta, and Anne Hathaway pose for photographers at the photo call for the film 'Armageddon Time' at the 75th international film festival, Cannes, southern France, Friday, May 20, 2022. /PTI] Los Angeles, May 20 : The first screening of 'Armageddon Time' at the ongoing 75th Cannes Film Festival, drew a five-minute standing ovation, as James Gray returned to Cannes for the fifth time with what was a personal story inspired by his childhood during 1980s Queens, NY, and the premiere was nothing but emotional, with the pinnacle of the event being Gray's address to the audience. Gray said in his speech as he began to choke up, "This is very emotional - it's my story in a way and you guys shared it with me. We finished the film last Saturday in a complete panic. You are the very first people on Planet Earth to see it. I'm grateful to each and every one of you. I love you all, and I hope I come back here sometime because it is the church of cinema." Anne Hathaway and Jeremy Strong, according to 'Deadline', appeared moved, as did the pic's younger stars Jaylin Webb and Banks Repeta, who were transfixed by the enormous and continued applause in the Palais Theatre. 'Armageddon Time' follows a young, artistic Jewish boy who comes up against challenges in public school and also befriends a rebellious classmate . Hathaway and Strong play the boy's working-class parents, while Anthony Hopkins is the wise, beloved, immigrant grandfather who steers the young adolescent on a proper path. The film is not dated yet, however, it would not come as a shock if Focus Features positioned the movie during awards season. That's similar to how it launched 'Loving' in Cannes in 2016, which went on to notch a Lead Actress Oscar nomination for Ruth Negga and also catapult her career. /IANS

New Delhi, June 19 : The Indian Air Force on Sunday released the details of the Agnipath recruitment scheme amid the ongoing agitation and widespread protests against the scheme across several states. […]

New Delhi, June 19 : Prime Minister Narendra Modi on Sunday said that Yoga has become more important in the present era when non-communicable and lifestyle related ailments are on the rise. The […]

Mumbai, June 19 : A father is the strongest pillar. He is the one who introduces the child to the world. Children always looks at their father as the hero of his/her life. On Father's Day, TV celebs s […]

Light rain, snow to continue in J&K, Ladakh during next 24 hours

Srinagar, June 19 : Weather remained inclement in J&K and Ladakh during the last 24 hours while higher reaches received fresh snowfall as the Meteorological (MeT) department said on Sunday that interm […]