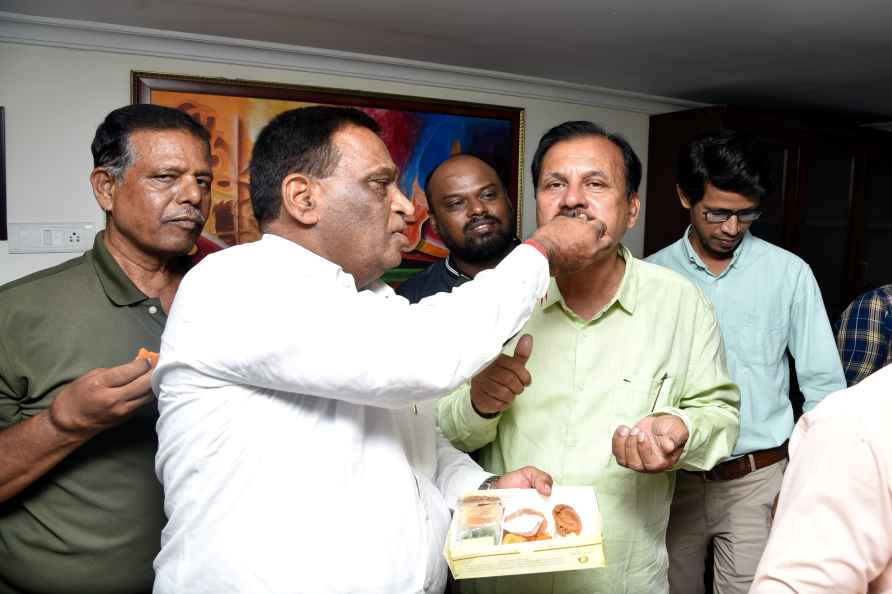 [Hyderabad: Father of Nikhat Zareen, who won the Women's World Championships by defeating Thailand's Jitpong Jutamas in the flyweight (52kg) final in Istanbul, in Hyderabad, Thursday, May 19, 2022. ( /PTI] New Delhi, May 19 : Star Indian boxer Nikhat Zareen clinched the gold medal at the 12th edition of the IBA Women's World Boxing Championships after registering a dominating 5-0 victory in Istanbul on Thursday. Living up to the expectations, Nikhat thrashed Thailand's Jitpong Jutamas without breaking a sweat in the 52kg final with judges scoring the bout 30-27, 29-28, 29-28, 30-27, 29-28 in the Indian's favour. The Nizamabad (Telangana)-born boxer became the only fifth Indian woman to secure a gold medal at the World Boxing Championships after record six-time champion Mary Kom (2002, 2005, 2006, 2008, 2010 and 2018), Sarita Devi (2006), Jenny RL (2006) and Lekha KC (2006). It was also India's first gold medal since boxing great Mary Kom won it in 2018. Nikhat got off to a lively start and hit some sharp punches to quickly take the upper hand in the opening three minutes against confident Jutamas, who came into the match defeating the three-time World Championships medallist Kazakhstan's Zhaina Shekerbekova. The 25-year-old Indian took full advantage of her long reach and maintained her dominance against the Thai boxer, whom she had beaten in the 2019 Thailand Open semi-final-the only meeting between the two, en route to her silver medal finish. However, Jutamas tried to fight back in the second round with a counter-attacking display but hardly managed to only cause any trouble for the swift-moving Nikhat, who looked in complete control. Hitting straight and clear punches, strength proved to be a key factor as Nikhat threw caution to the wind in the final round and kept attacking relentlessly before securing the gold quite comfortably. With Manisha (57kg) and Parveen (63kg) signing off with bronze medals after their semi-finals finish, the Indian contingent concluded its campaign with three medals at the world's biggest boxing event, which witnessed exciting competition in presence of record 310 boxers from 73 countries and also marked the 20th anniversary of the Women's World Championships. Out of 12 participating Indian boxers, eight made it to the quarter-finals in this year's tournament-the joint highest alongside Turkey. With the addition of three medals in Istanbul, India's overall medal tally has gone up to 39, including 10 gold, eight silver and 21 bronze, in the 12 editions of the prestigious event-the third highest after Russia (60) and China (50). /IANS

Kuortane Games: Neeraj Chopra clinches gold with a throw of 86.69 metres
[**EDS: FILE PHOTO** Tokyo: In this Saturday, Aug. 7, 2021 file photo, India's Neeraj Chopra reacts as he competes in the final of the men's javelin t

Telangana ministers attend funeral of youth killed in police firing
[Buxar: Charred remains of a police vehicle at Dumraon police station, after it was set on fire by protestors during the Bihar Bandh, called to protes

Mumbai, June 18 : Popular singer Mika Singh is all set for reality show 'Swayamvar - Mika Di Vohti' in which he will be seen seeking out his life partner. The show is hosted by Bollywood singer Shaan. […]

Mumbai, June 18 : Actor Anurag Vyas is excited to return to television with the period drama 'Swaraj'. The actor currently seen in Gul Khan's series 'Aashiqana' says: "I'm happy to act for a per […]

Mumbai, June 18 : Bollywood actor Varun Dhawan requested contestant Mohd Faiz to sing playback for him on 'Superstar Singer 2'. Varun is coming as a celebrity guest for the promotion of his movi […]