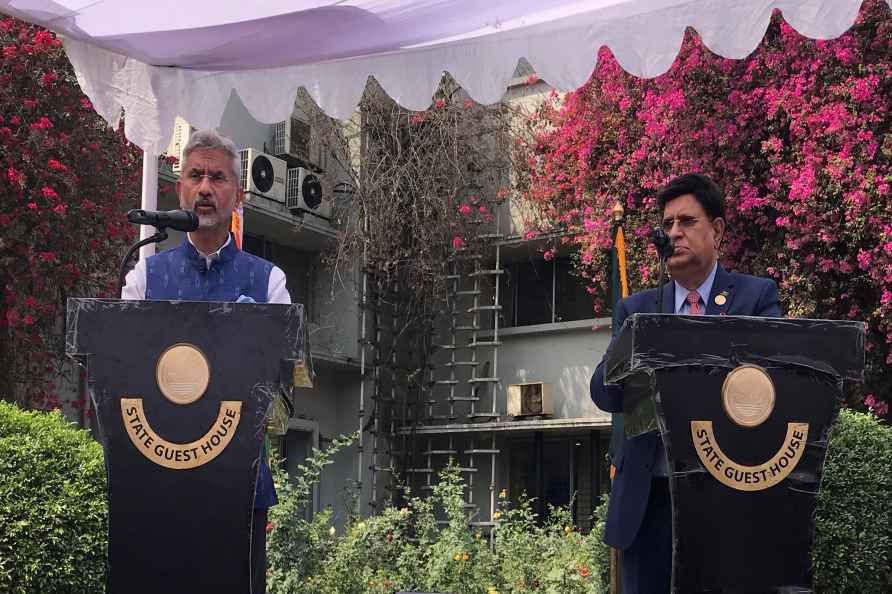 By Sumi Khan Dhaka, May 19 : Vikram Doraiswami, the Indian High Commissioner to Bangladesh, held a meeting with Bangladesh Foreign Secretary Masud Bin Momen on Wednesday and said that the unsettled river issues are expected to be discussed during the Joint Consultative Commission (JCC) meeting in Delhi on May 30. On Prime Minister Sheikh Hasina's upcoming visit to New Delhi on the invitation of Indian Prime Minister Narendra Modi, Doraiswami said they are now working on the dates as per the convenience of both the leaders. "Hopefully we will be able to finalise the dates quickly," he said. "I came here to discuss with the Bangladesh Foreign Secretary cooperation in the bilateral domain, multilateral domain and to identify what plans and outcomes we could look at during the JCC," Doraiswami told the media after the meeting. He said the JCC has many standard agendas that cover trade and connectivity, political, consular and cultural issues, and security cooperation. "So, (preparatory) work is in progress, obviously we hope that we could announce good outcomes out of the JCC later this month," Doraiswami said. "India is a very good friend of ours, and we can raise all issues with it," A.K. Abdul Momen, Foreign Minister of Bangladesh, told IANS on Wednesday evening. "So far it is set that I am going to New Delhi to attend the next JCC meeting on May 30. The agendas are yet to be finalised, but we are working on them," Momen said. The Foreign Minister said he would discuss all bilateral issues, including water sharing, with his Indian counterpart S. Jaishankar during the JCC in Delhi. Momen will go to Delhi via Assam where he would attend a river conclave organised by Bangladesh-India friendship groups and some NGOs on May 28-29. "We decided to attend the river conclave as four Indian ministers, including Jaishankar, will join the event to discuss trans-boundary river issues," he mentioned. Foreign Secretary Masud Bin Momen said that during the JCC meeting, Dhaka would raise the issues of water sharing of transboundary rivers, connectivity etc. "As the Covid situation has improved, we would like to resume all rail links and increase flight frequencies between Bangladesh and India," he said. The sixth JCC meeting was hosted by Dhaka virtually on September 29, 2020. /IANS

US FDA authorizes Covid vaccines for kids as young as 6 months
Washington, June 18 : The US Food and Drug Administration (FDA) has authorized emergency use of the Moderna and Pfizer-BioNTech Covid-19 vaccines for

Patna, June 18 : Despite the ongoing Bihar Bandh called in the wake of the massive violence against the Agnipath army recruitment scheme, agitators on Saturday set fire to a bus, truck and two other v […]

Washington, June 18 : The US Food and Drug Administration (FDA) has authorized emergency use of the Moderna and Pfizer-BioNTech Covid-19 vaccines for children as young as 6 months, the first for kids […]

PM Modi meets his mother on her birthday