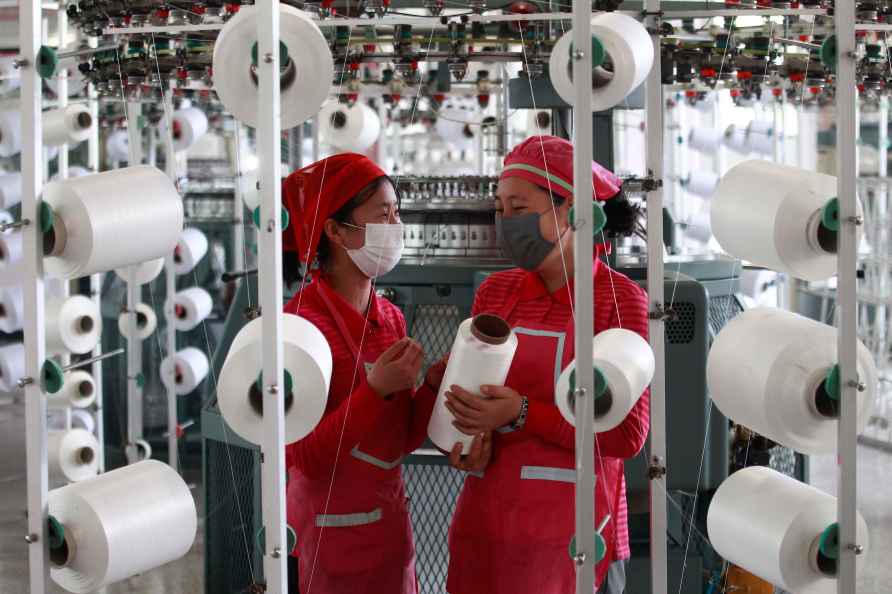 [Pyongyang: Employees of Songyo Knitwear Factory wearing face masks work to produce knitted goods in Songyo district in Pyongyang, North Korea, Wednesday, May 18, 2022. North Korea said Wednesday more than a million people have already recovered from suspected COVID-19 just a week after disclosing an outbreak it appears to be trying to manage in isolation as global experts express deep concern about the public health threat. /PTI] New Delhi, May 18 : While science shows that the crisis facing the natural world is accelerating, the UN process for addressing global biodiversity loss is at serious risk of further slowing down. Initially scheduled for October 2020, the 15th Conference of the Parties (COP15) to the UN Convention on Biological Diversity (CBD) has already been delayed four times because of the Covid-19 pandemic. With no official date announced for COP15, there is growing concern among scientists and other experts that countries are failing to address the biodiversity crisis with the required leadership and commitment. Some 196 countries are working through the CBD to develop a global strategy to help stem the tide of catastrophic biodiversity loss, which threatens up to one million species with extinction within decades. Countries have touted COP15 as an opportunity to deliver a deal for nature similar in ambition and significance to the Paris Climate Agreement, but repeated delays and a lack of urgency or high-level political attention could undermine that outcome if not addressed immediately. The CBD COP Bureau is slated to meet on May 19 to discuss plans for COP15 and determine when the COP will take place. It is critical that the COP dates be firmly set and that the COP allows for equitable participation from all interested parties, indigenous peoples and local communities, and civil society organizations. Brian O'Donnell, the Director of Campaign for Nature, told IANS in a statement: "The CBD needs to announce a firm date for COP15 and send a signal to the world that ending the extinction crisis is an urgent priority. "Getting an ambitious agreement to conserve the world's biodiversity, urgently transition away from nature destroying activities and support the people and communities doing the work on the ground is critical to ensure the planet's health -- now and in the future." Russ Feingold, former US Senator and Chair of the Campaign for Nature's Global Steering Committee, said: "I have worked with former heads of state, ministers, and other experts to establish the Campaign for Nature's Global Steering Committee. We have come together thanks to a common understanding that livelihoods, health, and economic well-being around the world depend on nature. "All countries need to make biodiversity conservation a greater priority, and that starts with setting a date for COP15 and agreeing to ambitious global targets." Advocating that the ecological crisis is as serious as the climate crisis, and the two are deeply intertwined, Christiana Figueres, former Executive Secretary of the UN Framework Convention on Climate Change (UNFCCC), said: "Both for the sake of nature and our climate, it is critical that the Convention on Biological Diversity holds COP15 and agrees to an ambitious global biodiversity framework as soon as possible." Zakri Abdul Hamid, Founding Chair of IPBES and one of the original negotiators of the Convention on Biological Diversity, said any further delay in the convening of COP15 will be a serious step backward considering that the destruction of nature continues unabated. /IANS

By Ashok Nilakantan New York, June 18 : The Bipartisan Gun Law being negotiated in the Congress appears to have hit bumps already with majority of the American citizens and pro-gun lobby Republicans […]