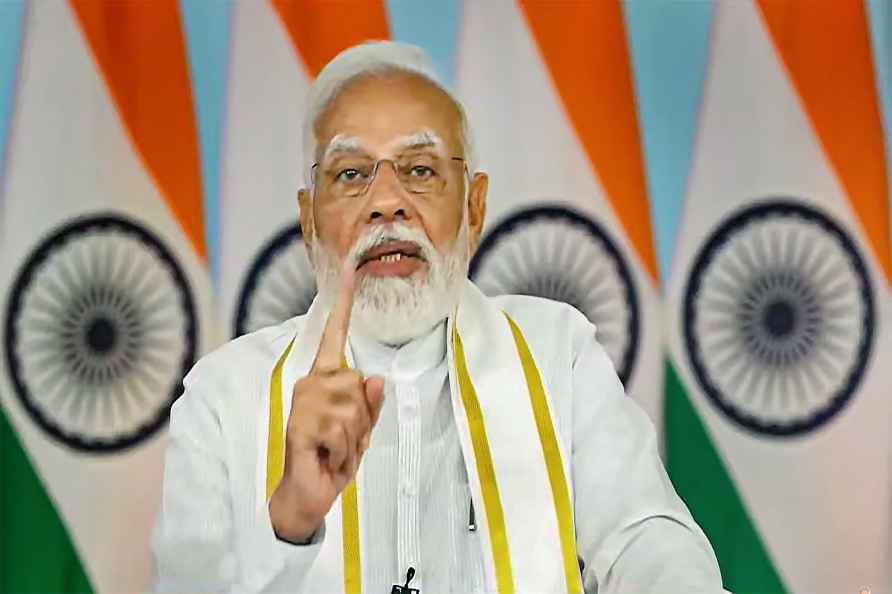 [**EDS: VIDEO GRAB** New Delhi: Prime Minister Narendra Modi addresses the silver jubilee celebrations of Telecom Regulatory Authority of India (TRAI), through video conferencing, in New Delhi, Tuesday, May 17, 2022. ( /PTI] New Delhi, May 17 : Prime Minister Narendra Modi on Tuesday said that the connectivity speed will now determine the growth and development of the country. At an event organised by the Ministry of Communication to mark the silver jubilee of the Telecom Regulatory Authority of India (TRAI), he launched the 5G test bed. TRAI is celebrating its foundation day when the country is also planning the growth for the next 25 years under the 'Azadi Ka Amrit Mahotsav', he said. Expressing his happiness over the launch of 5Gi, he said that it will set its own standard of 5G in India. Noting that the 5G technology will facilitate governance and make a positive change in ease of doing business in many fields, Prime Minister Modi said that it will create more jobs in many sectors. The 6G service, he said, will be launched by the end of this decade, adding that a taskforce has already started working on the project. Referring to the 2G period, he said: "It was full of frustration, corruption and policy paralysis but after that we came to 3G, 4G and now we are testing the 5G technology, developed by the Communication Ministry, Indian Institute of Technology at Chennai and Delhi". Noting that the Telecom sector is one of the finest examples of self-reliance, PM Modi also said that one-and-a-half times more foreign investments has come in the last eight years in comparison to total investment till 2014. "Today, we are the fastest growing country using mobile and internet and mobile phone manufacturing. We had only two companies producing mobile phones but now there are over 200 mobile companies who are manufacturing mobile sets for our domestic needs but we are also exporting to other countries," Modi said. He also said that in 2014, the government initiated 'Sabka Saath, Sabka Vikas' and wanted to get the people connected with the government sponsored programme at the minimum cost and "we initiate the connecting the Jan Dhan account, Aadhar card" with mobile to get the direct benefit schemes. "To keep the call and internet data rate cheaper, we initiated policies in the telecom sector and made it competitive and healthy and this is why the calls and internet data both are quite cheap in India," PM Modi said. He also informed that over 1,75 lakh Gram Panchayats are connected with the broadband facility and gave approval of the 4G network by BSNL in Naxal-affected areas. PM Modi also urged all the regulators of this sector to make a common platform to find out best solutions for the telecom industry in days to come. /IANS

New Delhi, June 16 : As campaigning for Rajinder Nagar Assembly bypolls intensifies, the BJP has launched a "carpet bombing" of small meetings by its leaders across the constituencies. These sma […]

New Delhi, June 16 : India on Thursday reported 12,213 fresh Covid cases in a single-day rise as against the previous day's count of 8,822 infections, the Union Health Ministry said. This is the first […]

Bengaluru, June 16 : Karnataka High Court has reserved its judgment in a petition by Chinese firm Xiaomi against the seizure of Rs 5,551.27 crore from its bank accounts by the Enforcement Directorate […]