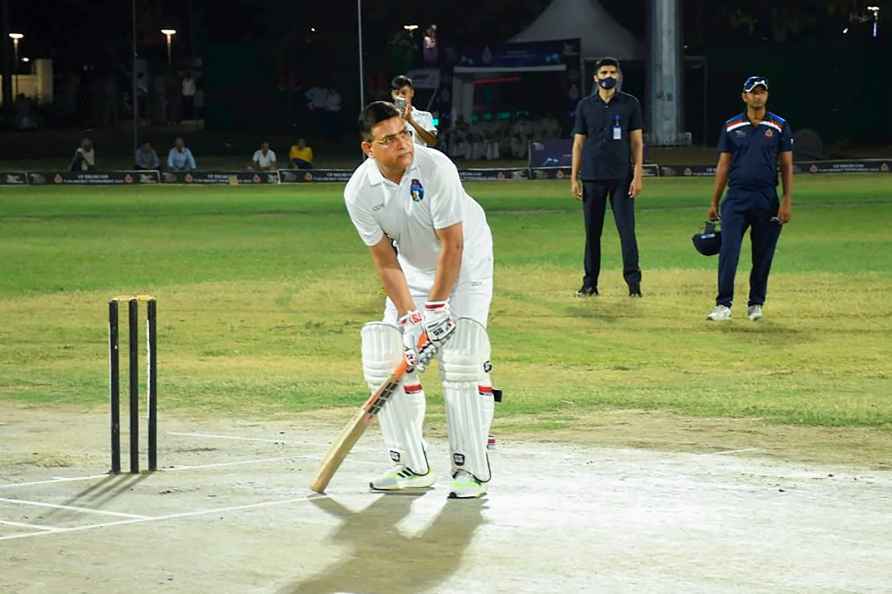 [New Delhi: Police Commissioner of Delhi Rakesh Asthana bats during the closing ceremony match of CP Delhi Cup T-20 Cricket Tournament 2022 between Delhi Police XI and Daman & Diu Police XI, at Sports Ground, New Police Lines, in New Delhi, Friday, May 6, 2022. ( /PTI] New Delhi, May 6 : Chandigarh won the inaugural edition of the Sardar Patel National Divyang Svayam T20 Cricket Cup after beating Delhi by nine wickets in the final at Talkatora Cricket Ground, here on Friday. Batting first, Delhi scored 123 runs for the loss of nine wickets in the stipulated 20 overs. Farman with 35 runs in 31 balls was the highest scorer for the side. Mehtab Ali chipped in with 25 runs in 30 balls, while Sachin Bhati scored 13 runs and Rovesh Nayar scored 12 runs. As far as bowling was concerned, Chandigarh's Gurjant was the most successful bowler. He took four wickets for 19 runs in four overs. Vikram and Bajetha took wickets each, while Vipin took one wicket. In reply, Chandigarh achieved the target with nine wickets in hand and 4.2 overs to spare (124/1). Chandigarh's skipper Dev Dutt played an unbeaten knock of 75 runs for 55 balls. Sanjay Bhairav scored unbeaten 24 runs in 31 balls. Sports minister Anurag Takhur, who was the chief guest at the closing ceremony of the tournament, appreciated the efforts of the Differently Abled Cricket Council of India (DCCI) for organising the tournament and providing a platform for the differently abled cricketers to showcase their talent. "Sports is the best platform to empower differently abled players and bring them into the mainstream. The sports ministry will provide the best possible support required taking the differently abled cricket to next level and I also appreciate the BCCI (Board of Control for Cricket in India) for recognizing the DCCI," said Thakur, who has also served as the president of the BCCI in the past. The three-day tournament was supported by the Department of Empowerment of Persons with Disabilities (Divyangjan), the union ministry of social justice and empowerment. India's leading accessibility organisation Svayam has joined hands with the DCCI and is sponsoring the sportswear for all 90 players as well as 40 officials, umpires, and scorers for the tournament besides providing accessible transport for players. Svayam believes in enabling people, whether it is para-athletes, cricketers with disabilities, or anyone facing reduced mobility challenges. Notably, the DCCI is an umbrella body to promote cricket among the differently abled - physically challenged, deaf, blind and wheelchair - players in the country. The unified body for the differently abled cricketers is recognized by the BCCI (Board of Control for Cricket in India). /IANS

Where is the FIR, Chidambaram asks BJP
[New Delhi: Police stop Congress workers during a protest march at the AICC ahead of Rahul Gandhi's second appearance before the Enforcement Directora

Washington, June 14 : US National Security Adviser (NSA) Jake Sullivan and member of the Political Bureau of the Communist Party of China Yang Jiechi held "candid, substantive, and productive" talks a […]

Where is the FIR, Chidambaram asks BJP

[New Delhi: Police stop Congress workers during a protest march at the AICC ahead of Rahul Gandhi's second appearance before the Enforcement Directorate (ED) in the National Herald case, in New Delhi, […]

Recruit 10 lakh people in 1.5 years: PM to all departments, ministries

New Delhi, June 14 : Prime Minister Narendra Modi on Tuesday instructed to fill 10 lakh vacancies in all the departments and ministries in mission mode in next one-and-a-half years. Prime Minist […]

[New Delhi: Congress leaders Rahul Gandhi and Priyanka Gandhi arrives to meet party workers at the AICC headquarters before leaving for the Enforcement Directorate (ED) office to appear in the Nationa […]