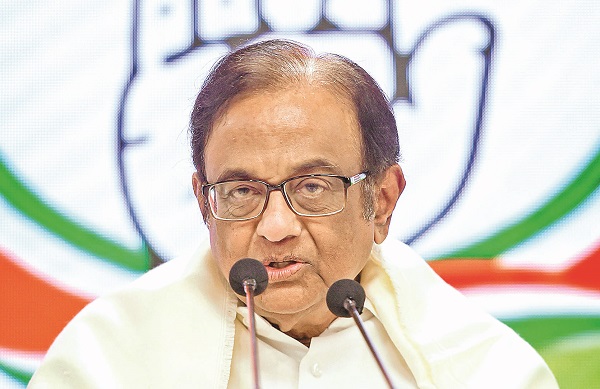 Udaipur, May 14 (IANS) Former Home Minister and senior Congress leader P. Chidambaram on Saturday said that status quo on all places of worship should be maintained else it would lead to a conflict. The Rajya Sabha member was reacting to the ongoing Gyanvapi mosque row. "Places of worship Act was passed by the Narasimha Rao government with the lone exception of Ram Janmabhoomi. All other places should have status quo as any kind of change could lead to a huge conflict," he said. On Friday, the Supreme Court agreed to hear the issue but refused to immediately halt the survey of the Gyanvapi Mosque in Varanasi. The apex court on Thursday rejected the demand for the removal of the advocate commissioner for the video survey of the Gyanvapi mosque. It has appointed two additional advocates to assist the advocate commissioner. The Muslim petitioners had sought the removal of advocate commissioner Ajay Mishra on the grounds that he was doing the video survey of areas in the Gyanvapi mosque that are not specified in the order. The court said that the video survey will continue and will be completed by May 17. Anyone who tries to stall the survey should be dealt with sternly, it added. --IANS

Kyle Jamieson ruled out of day four action against England due to lower back scans
[Nottingham: New Zealand's Daryl Mitchell, right, stands with batting partner Tom Blundell to watch a review of Blundell during the fourth day of the

K'taka police arrest actor Shakti Kapoor's son in drugs case
[**EDS: TO GO WITH STORY** Bengaluru: Bollywood actor Siddhanth Kapoor along with four others being taken for medical check-up, after they were arrest

Pressure on India to remain alive in series with a must-win match against South Africa
[Visakhapatnam: Preparations underway at Dr YS Rajasekhara Reddy ACA-VDCA Cricket Stadium, ahead of the 3rd T20 cricket match between India and South

Riyadh, June 13 : Saudi Arabia has launched an $80 million programme to provide funding for small and micro enterprises in the tourism industry. Under the Tourism Finance Program, the Tourism De […]

By Rachel V Thomas New Delhi, June 13 : The recent surge in Covid-19 cases in the country is part of the new normal as the virus continues to mutate, experts said on Monday and added that use of ma […]

New Delhi, June 13 : Union Minister Smriti Irani on Monday said that Congress leaders have taken to the streets to pressurize the investigating agency because their corruption has been exposed. She al […]