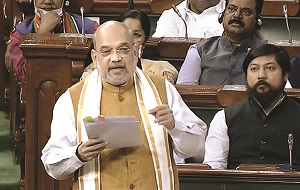 Kolkata, May 6 (IANS) Union Home Minister Amit Shah said that he wants a Central Bureau of Investigation (CBI) enquiry into the the mysterious death of an activist reportedly associated with BJP's youth wing whose body was found hanging from an abandoned room near a railway line at Cossipore Road in Kolkata early on Friday. He also said that his ministry will seek a detailed report from the state government on this unfortunate incident on Friday only. Shah returned to Kolkata from Tinbigha in Cooch Behar district and from the Kolkata airport, went straight to the residence of the deceased youth, Aryun Chaurasia, 26, and interacted with his family members. Accompanied by BJP state President Sukanta Majumdar and Leader of Opposition in Assembly, Suvendu Adhikari, he also went to the room where the body of the youth was discovered. "I talked to the family members of the deceased youth. They complained that they were even beaten up. The BJP will approach the court seeking an independent enquiry in the matter. I feel that there should be a CBI enquiry in the matter. According to him, the unfortunate incident took place just a day after Mamata Banerjee completed a year as the Chief Minister of West Bengal for the third consecutive term. "... Recently the Calcutta High Court has ordered CBI enquiry on many incidents in the state within a short period of time. This proves that neither the people of the state nor the judiciary have any faith in the state administration and the state police," the Union Home Minister said, alleging that the incidents of violence in West Bengal have surpassed all records of the previous Left Front government on this count. Claiming that there is no rule of the law currently in West Bengal, Shah alleged the opposition leaders and party workers of the opposition parties are being constantly targeted by the ruling party and the state administration. --IANS

Gauff promises a 'different result' the next time she meets Swiatek
[Poland's Iga Swiatek jumps next to her trophy in Paris, France, Sunday, June 5, 2022, after she won Saturday's women's final match at the French Open

From domestic terrorism, Khalistani US groups have evolved to political manipulation
[Persons of the German rail operator Deutsche Bahn' stead next to a carriage on the site of a train crash in Burgrain, near Garmisch-Partenkirchen, Ge

[England's Joe Root, right, and England's Ben Foakes celebrate as England win by five wickets on the fourth day of the test match between England and New Zealand at Lord's cricket ground in London, Su […]

Gauff promises a 'different result' the next time she meets Swiatek