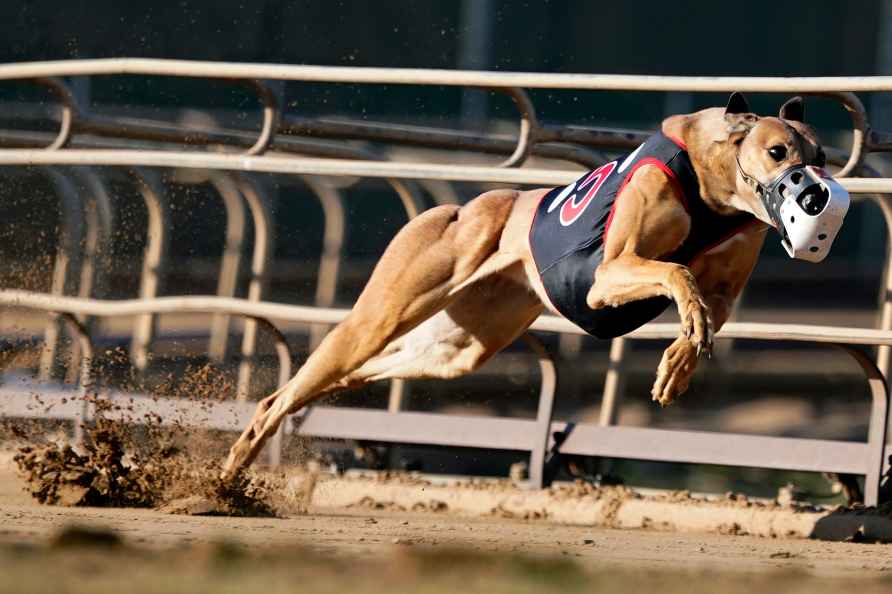 [Dubuque: A greyhound competes in a race at the Iowa Greyhound Park, Saturday, April 16, 2022, in Dubuque, Iowa. After the end of a truncated season in Dubuque in May, the track here will close. By the end of the year, there will only be two tracks left in the country. /PTI] Pune, May 2 : M.S Dhoni made a winning return to being the Chennai Super Kings skipper with a 13-run win over Sunrisers Hyderabad at MCA Stadium on Sunday. After being at the helm for Chennai's third win of the current season, Dhoni revealed that all-rounder Ravindra Jadeja was aware that he would be captaining the defending champions in IPL 2022. On the eve of the match against Hyderabad, Jadeja, who was announced as Chennai's skipper ahead of the tournament's commencement, had given back the captaincy mantle to Dhoni. "I think Jadeja knew last season he'd be captaining this year. He knew and got enough time to prepare, what is important is you want him to lead the side and I wanted that transition to happen. In the first two games, there was information going to Jaddu and after that, I left it to him to decide which angle to bowl and all that," said Dhoni after the match. Dhoni went on to explain about the processes behind why Jadeja was given the leadership role and how it went back to him. "At the end of the season, you don't want him to feel as the captaincy was done by someone else and I'm just going for the toss. So it was a gradual transition. Spoon-feeding doesn't really help captain, on the field you have to take those crucial decisions and you have to take responsibility for those decisions." "Once you become captain, it means a lot of demands come in. But what I felt is it affected his mind as the tasks grew. I think captaincy burdened his prep and performances; it meant he could not go with the bat and ball with the same intensity. Even if you relieve captainship and if you are at your best 'nd that's what we want."' Chennai's 13-run win was set up by a mammoth 182-run opening partnership between Ruturaj Gaikwad (99 off 57 balls) and Devon Conway (85 not out off 55 balls), propelling the total to a massive 202/2. In response, Hyderabad could put up 189/6 in their 20 overs. Dhoni credited the bowlers for keeping Hyderabad in check during the middle overs phase of defending 202. "It was a good score to defend. I did nothing different, it's not like much changes with the change of captain. It's one of those coincidences where we got off to a good start and forced the bowlers to bowl the areas where we wanted to hit. The kind of target we got was a very good one. Dew comes in so the bowling needed to be good. The spinners did well in the 7-14 over the period, that was key to the win and gave a surplus of runs which we could fall back on." Asked about his chat with the bowlers, Dhoni revealed, "We have had quite a few good performances with the bat, but we give 25-26 runs off a couple of overs and there like, the bowlers have to try something different. I always told my bowlers, you may get hit for 4 sixes in an over, but the 2 balls that you save - ultimately in a high-scoring game - those are the 2 deliveries that will help you win the game." "Because a lot of bowlers, after getting 3-4 sixes, they will be like let's get done with it but that one boundary or even instead of sixes if you get hit for 2 fours that will help you in a game. I don't know if they believe in that theory, but it really works." Dhoni signed off by saying that Chennai need to put in lots of hard work in improving their fielding performance. "We also lost a great fielder, we are struggling for a deep-midwicket fielder. We have had a lot of drops which we need to improve on." "We do not want bowlers to be lost, with the younger bowlers, you need to be with them and tell them about the fields. It's good to see Mukesh come up, you can't get away with things at this level. You need to accept shortcomings too which is key." /IANS

Death toll rises to 7 in Italian glacier landslide
[Canazei: Rescuers prepare to conduct searches for the victims of the Punta Rocca glacier avalanche in Canazei, in the Italian Alps in northern Italy,