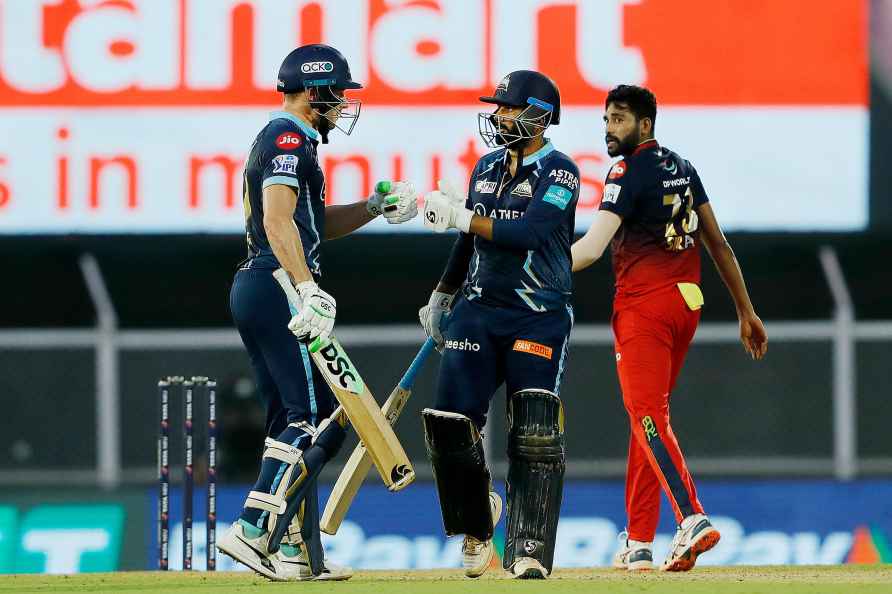 Mumbai, April 30 : Gujarat Titans all-rounder David MIler on Saturday credited the relaxed atmosphere created by coaches Gary Kirsten and Ashish Nehra, and clarity about their individual roles for his team's success in IPL 2022 so far. Miller struck an unbeaten 39 off 24 balls and shared a 79-run partnership with Rahul Tewatia (43 not out off 25) as Gujarat Titans overhauled the target of 171 set by Royal Challengers Bangalore, reaching 174/4 for a six-wicket win. Miller said he enjoyed batting with Tewatia. "Another game with Tewatia was great, it's important to have such performances to get to the playoffs. Playing a lot of golf helped, but being relaxed with Ashish Nehra and Gary Kirsten in the coaches list helped," said Miller. Miller, the experienced campaigner from South Africa who has played in T20 leagues in England and the Caribbean besides India, said skipper Hardik Pandya has taken captaincy well and has managed the atmosphere in the team well. "He's taken to captaincy well, his batting is good. He's level-headed off the field and has managed the atmosphere excellently. Role clarity is essential," he said. The 32-year-old from Pietermaritzburg, Natal, said the superb atmosphere in the team is helping them perform well in the field. "We are feeding off each other. Hope we put a well-rounded performance soon to go one step better from now, where we are doing well in parts. We have been good in the powerplay," said Miller. The conditions at Brabourne during the afternoon match were pretty tough for both teams, especially for Gujarat as they had to field in the worst conditions. Miller said he will cool things down with an ice bath and some cold beers. "It was pretty hot, so we will have a few ice baths and cold beers," he said. /IANS

Madrid, May 31 : Soaring food and petrol prices have pushed up inflation to 8.7 per cent in Spain in May, according to preliminary data published by the country's Statistical Institute (INE). Ma […]

Mumbai, May 31 : Condolences continue to pour in for Sidhu Moose Wala, who was shot dead in his SUV on Sunday. After Vishal Dadlani, Kapil Sharma, Shehnaaz Gill and A.P. Dhillon, now Canadian YouTuber […]

**EDS: TWITTER IMAGE POSTED BY @VPSecretariat ON TUESDAY, MAY 31, 2022** Gabon: Vice President M. Venkaiah Naidu presents a copy of the Constitution of India to dignitaries during a meeting, in Gabon. […]

Los Angeles, May 31 : Hollywood star Dwayne Johnson shared that his youngest daughter Tiana refuses to believe that he voiced the character Maui from the animated film 'Moana'. The 'Moana' voice […]