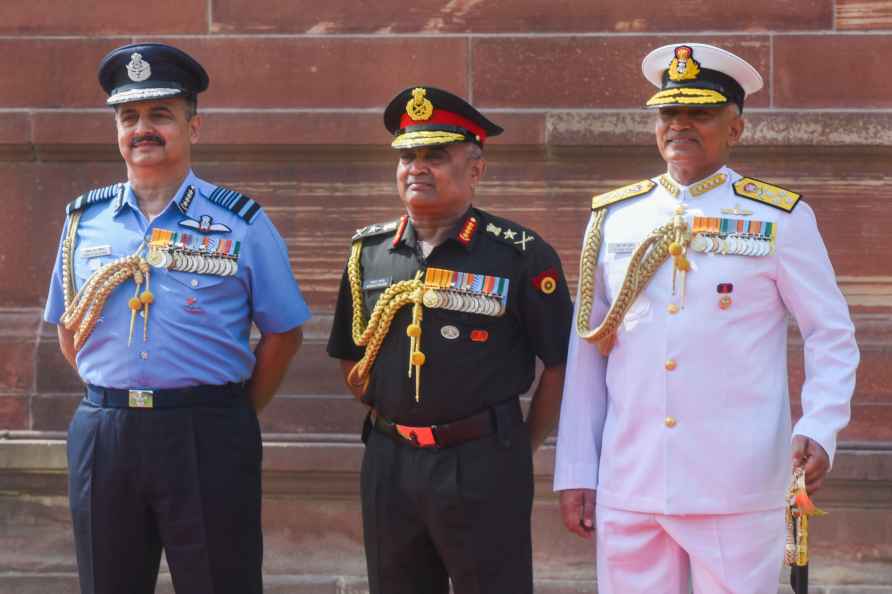 [New Delhi: Chief of the Air Staff Air Chief Marshal VR Chaudhari, Chief of the Army Staff General Manoj Pande and Chief of Naval Staff Admiral R Hari Kumar at the Guard of Honour for General Manoj Pande, on his taking over as the 29th Chief of Army Staff, at South Block in New Delhi, Sunday, May 1, 2022. All three Chiefs are now from the 61st NDA course. ( /PTI] New Delhi, May 1 : General Manoj Pande after assuming charge of the chief of Indian Army on Sunday said his utmost and foremost priority would be to ensure very high standards of operational preparedness to face the current contemporary and future challenges across the entire spectrum of conflict. India has been facing a two front war-like situation with China and Pakistan as border disputes remain unresolved. He received the Guard of Honour at the South Block lawns where Air Force and Navy chiefs -- Air Chief Marshal V.R. Chaudhari and Admiral R. Hari Kumar -- were also present. "I have known the other two Service chiefs well. It's a good beginning of synergy, cooperation and joint manship among the three Services. I assure you that all three of us will work together and take things forward in the cause of national security and defence," General Pande said. All three services chiefs hail from the 61st course of National Defence Academy. The Indian Army chief said, "Geopolitical situation is changing fast. We have multiple challenges ahead of us." Talking about the capability development and force modernisation, General Pande also stated that his efforts would be to leverage new technologies through the process of indigenisation. He said his focus would be on ongoing reforms, restructuring and transformation so as to enhance the Army's operational and functional efficiency. "The aim will be to enhance inter-Services cooperation," he said. Pande became the first officer from the Corps of Engineers and also the first from the combat support arms to head the force. /IANS

SC refuses to entertain Nupur Sharma's plea to club FIRs in various states for her remark against Prophet, allows her to withdraw plea.

SC refuses to entertain Nupur Sharma's plea to club FIRs in various states for her remark against Prophet, allows her to withdraw plea. […]

Canberra, June 30 : Australians are among the biggest users of methylamphetamine in the world, an analysis of wastewater revealed on Thursday. The Australian Criminal Intelligence Commission (AC […]