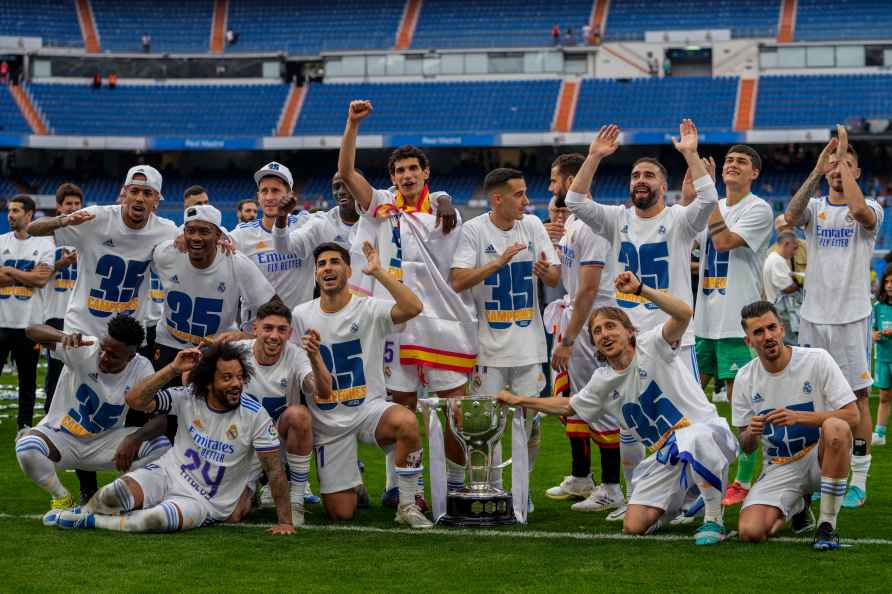 [Madrid: Real Madrid players pose with the trophy to celebrate the team's La Liga title after a Spanish La Liga soccer match between Real Madrid and Espanyol at the Santiago Bernabeu stadium in Madrid, Saturday, April 30, 2022. /PTI] Madrid, May 1 : Real Madrid sealed their 35th La Liga title thanks to a 4-0 win over Espanyol. Two first-half goals from Rodrygo and further strikes from Marco Asensio and Karim Benzema saw Carlo Ancelotti's men to an easy win against a rival that looked like an uninvited guest at the celebrations on Saturday night. Ancelotti rested nine of the 11 players who faced Manchester City in the Champions League last Tuesday, with only Luka Modric and Thibaut Courtois keeping their places ahead of next week's European return leg. Rodrygo's opening goal came in the 33rd minute when he received a cross from left back, Marcelo and beat two defenders before scoring with a low shot across Espanyol keeper Diego Lopez, Xinhua reports. The second goal came after Mariano Diaz pressured the Espanyol defence into an error as they looked to play the ball out from the back. Rodrygo collected the ball and scored with a shot that was tight against the post. Marco Asensio made it 3-0 in the 55th minute when he slipped through to finish off a counter-attack by Eduardo Camavinga. Camavinga, Modric and Mariano were replaced by Karim Benzema, Toni Kroos and Isco on 60 minutes and Isco thought he had added a fourth with 20 minutes left to play, only for it to be ruled out for offside. However, Benzema did net a fourth with a typical first-time finish following a move between Vinicius Jr and Isco. On a personal level, the win means that Ancelotti has now led clubs to league titles in Spain (Real Madrid), Italy (AC Milan), England (Chelsea), France (Paris Saint Germain) and Germany (Bayern Munich). Sevilla's hopes of finishing second suffered a setback when they were held 1-1 at home to struggling Cadiz. Youssef En-Neysri's first half header for just his fourth league goal of the season, put Sevilla ahead, but a dogged Cadiz got their reward in the second half thanks to Lucas Perez's excellent free kick. Atletico Madrid's fourth place also looks in doubt as they were beaten 2-0 away to Athletic Club Bilbao, who keep their hopes of playing in Europe next season alive with an impressive win. Inaki Williams' eighth-minute cross was deflected into his own net by Atletico defender Mario Hermoso as Athletic dominated the first 25 minutes. Atletico began the second half brightly, but after Antoine Griezmann had rattled the crossbar with a free kick, Williams netted Athletic's second from the penalty spot after Iker Muniain had been fouled. Although Angel Correa saw a deflected shot rebound off the post in injury time, Atletico never looked like recovering from the second goal. The result leaves Athletic a point behind seventh place Villarreal, who suffered a hangover from their Champions League semi-final against Liverpool with a 2-1 defeat away to Alaves. First half goals from Victor Laguardia and Gonzalo Escalante gave Alaves a two-goal cushion and the side from Vitoria held on to climb above Levante after Samuel Chukwueze pulled a goal back for Villarreal two minutes into the second half. Oscar Duarte scored an 81st minute equaliser for Levante to cancel out Hugo Duro's first half opening goal for Valencia in the city derby. Levante slipped back to bottom of the table after missing chances to win the game after Valencia defender Jose Luis Gaya was sent off for a direct red card after 31 minutes. Levante made 24 shots in the game but collected only one goal from Duarte on 81 minutes. Duro caught the only chance on target for Valencia in the 27th minute. /IANS

Not a PM, just a 'pradhan sevak': Modi
[**EDS: HANDOUT PHOTO MADE AVAILABLE FROM PIB ON TUESDAY, MAY 31, 2022** Shimla: Prime Minister Narendra Modi releases the 11th instalment of financia

Japanese Prime Minister Fumio Kishida raises hand to speak at Budget Committee of the upper house of the Diet, Tuesday May 31, 2022 in Tokyo. Japan?Äôs parliament on Tuesday enacted a 2.7 trillion yen […]

US not providing Ukraine with long-range rocket systems: Biden

Washington, May 31 : The US will not provide Ukraine with long-range rocket systems capable of hitting targets inside Russia, President Joe Biden said, despite pleas from the war-torn nation for the s […]

Hyderabad, May 31 : Tollywood star Mahesh Babu penned a heartfelt note to his father and superstar Krishna on the occasion of the veteran actor's 79th birthday on Tuesday. Mahesh Babu, who share […]