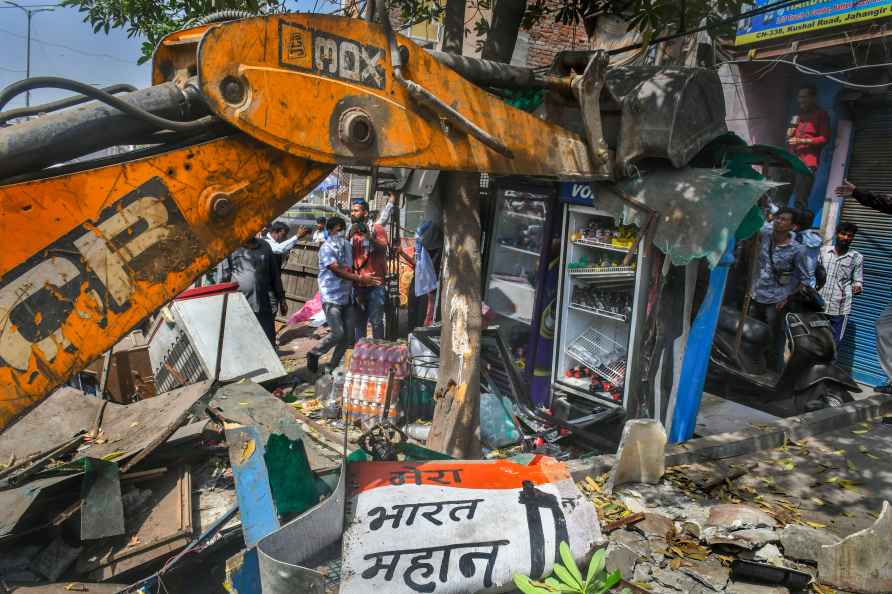 [New Delhi: A bulldozer being used to demolish illegal structures during a joint anti-encroachment drive by NDMC, PWD, local bodies and the police, in the violence-hit Jahangirpuri area, in New Delhi, Wednesday, April 20, 2022. ( /PTI] New Delhi, April 20 : After Uttar Pradesh and Madhya Pradesh, bulldozers can now be deployed in Delhi also to raze illegal constructions owned by riot accused in violence-hit Jahangirpuri. The North Delhi Municipal Corporation (North MCD) can carry out a large scale anti-encroachment drive in the area on Wednesday. According to an information, the corporation has sought help from the police to maintain law and order on April 20 and April 21 to take action on illegal construction. The corporation has written a letter to the police asking for a contingent of 400 policemen, so that the situation can be brought under control in case of any ruckus. Meanwhile on Tuesday, state BJP President Adesh Gupta wrote a letter to the North Delhi Municipal Corporation Commissioner and the Mayor, appealing to take action against illegal construction and encroachment in Jahangirpuri area by running bulldozer on the lines of the Uttar Pradesh government. "The anti-social elements and rioters have the protection of local AAP MLAs and corporation councillors, due to which they have done several illegal constructions and encroachments in Jahangirpuri area. Therefore, they should be identified and such constructions should be razed," Gupta urged in the letter while seeking strict action. Overall, nearly 25 people have been arrested by the police so far in connections with the violence that erupted after alleged stone pelting on a 'Shobha Yatra' in Jahangirpuri area. The widespread clashes left several people injured, including cops. The Delhi Police has imposed National Security Act (NSA) on the five accused arrested in connection to the violence. The accused have been identified as Ansar, Salim, Imam Sheikh alias Sonu, Dilshadi and Ahidi. /IANS

4 killed in UP e-way accident in UP

Unnao (Uttar Pradesh), June 19 : Four persons were killed and one seriously injured when a container rammed into a car in the Hasanganj police circle area on Sunday morning on the Lucknow-Agra Express […]

Cape Town, June 19 : Sune Luus will lead the 15-member South Africa side for the upcoming one-off Test and three-match ODI series against England, beginning with the four-day game at Taunton on June 2 […]

39 ships from 14 countries blocked in Odesa

Kiev, June 19 : A top Ukrainian official confirmed that 39 civilian ships sailing under the flags of 14 countries are currently blocked in the ports of Odesa as a result of the ongoing war. The […]