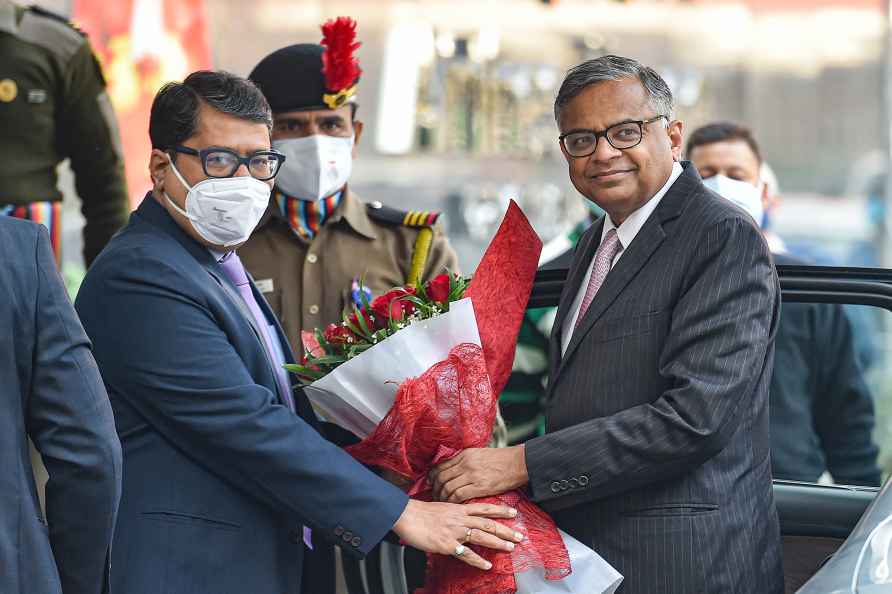 New Delhi, Jan 27 : N. Chandrasekaran, the chairman of Tata Sons, who control the entire Tata conglomerate, called on Prime Minister Narendra Modi in Delhi on Thursday ahead of the official handover of Air India after the Tata group won the bid on October 8, 2021, leaving behind its competitor SpiceJet. Tata won the bid with a whopping Rs 18,000 crore and took the Air India back after 69 years. This meeting is the final call, in aviation lingo, that now Air India is no longer a government of India enterprise, and has become a private entity. The meeting came after Air India handed over the balance sheet till January 20, 2022 to Talace, an aviation subsidiary of Tata Sons, who will manage the Air India, Air express and Air India's ground handling service. The Tata Group executives reviewed the balance sheet and had an option to ask for any correction till january 24, after that the government of India will hand over Air India, Air Express and its ground handling service to Tata Group, and with this 100 per cent disinvestment in Air India, a government PSU, will be completed. Tata group already has announced an 'enhanced meal service' in Air India's four flights, namely AI864 Mumbai-Delhi, AI687 Mumbai-Delhi, AI945 Mumbai-Abu Dhabi and AI639 Mumbai-Bengaluru from January 27 only. This will be expanded in other flights and routes in a phased manner. Along with this, grooming of cabin crew is already suggested by the TATA Group management as they say the crew members are the brand ambassadors of airlines. Also in flight announcements will address passengers as 'Guests', and a recorded message of Ratan Tata will be played in each and every flight. But the first and foremost priority of TATA is to work on Air India On Time Schedule. /IANS

Kolkata, May 5 (IANS) The political situation in West Bengal will soon be such that the local administration will be forced to assist the Border Security Force (BSF) to check illegal infiltration and […]

Washington, May 5 (IANS) US President Joe Biden declared the raging wildfires lasting for weeks in the state of New Mexico "a major disaster", unlocking millions of dollars in relief for affected indi […]

Amit Shah might call on Sourav Ganguly on Friday

Kolkata, May 5 (IANS) Though nothing has been finalised yet, Union Home Minister Amit Shah might meet BCCI President and former India captain Sourav Ganguly on Friday evening before leaving for Delhi […]