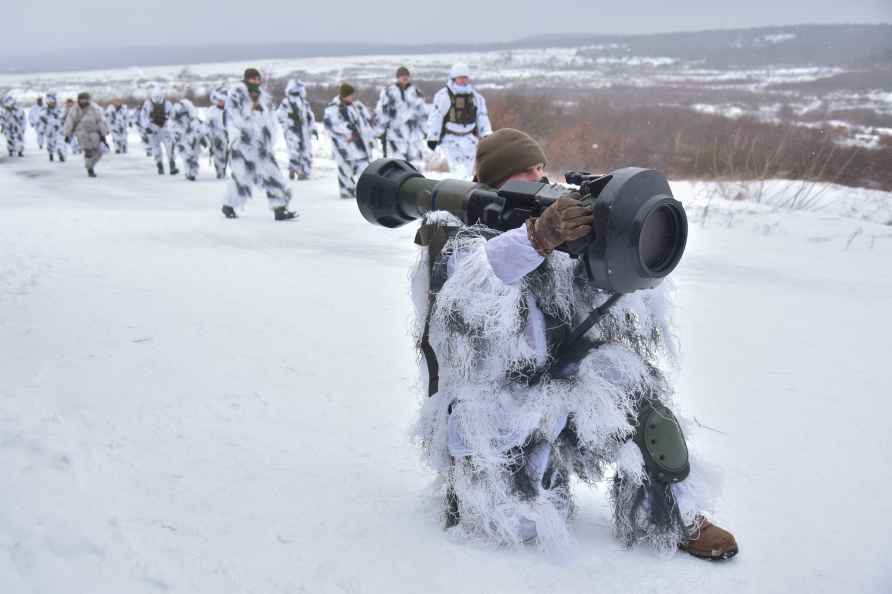 [Lviv: CORRECTS THAT NLAW ARE ANTI-TANK AND NOT ANTI-AIRCRAFT MISSILES - Ukrainian soldiers take part in an exercise for the use of NLAW anti-tank missiles on the Yavoriv military training ground, close to Lviv, western Ukraine, Friday, Jan. 28, 2022. British defense secretary Ben Wallace told the U.K. had already delivered 2,000 NLAWs to Ukraine, a number he indicated might continue to rise. The missiles were London's way of providing defensive aid to Kyiv as Russian forces deploying around Ukraine's borders give the impression a new invasion may be imminent. /PTI] By Amresh Srivastava New Delhi, Jan 28 : The Border Security Force will soon get over 100 steel fabricated composite habitats along the Line of Control (LoC) in Jammu and Kashmir, BSF officials told IANS on Friday. According to the officials, the BSF is in the process of setting up over 100 steel fabricated containers in high altitude Forward Defence Localities (FDLs) along the LoC to protect its troopers from the inclement weather, with an attached kitchen and toilets. The total cost of these will come to around Rs 35 crore, they added. "These steel fabricated living accommodations will be insulated from inside, have bunk bed facilities and will have both solar and generator power supply," a senior BSF official said, adding that the locations of these FDLs will range from 8,000 feet to 15,500 feet. The proposal for these units has been sent to the Ministry of Home Affairs which has approved it in principle. A further process for financial sanction is underway. The BSF officials have already contacted senior officials of the Ministry of New and Renewable Energy in Delhi to get solar power projects sanctioned for these FDLs which has also been approved. At present, all activities at these locations including cooking and daily ablutions, are carried out using power sourced from kerosene and diesel, they said. These upcoming habitats will accommodate at least 12 troopers at a time and the attached kitchen will have all facilities to serve freshly cooked food in even the most inclement and harsh conditions. The kitchen and toilets will be attached to the main living huts. As of now, the troops at these icy locations at altitudes ranging from 8,000 feet-16,000 feet, live in corrugated galvanized iron sheet-made hutments along with their rations and weapons, exposing them to the sub-zero temperatures. Due to the weather, the areas remain snow clad on an average of five to seven months in a year. The BSF has already finalized the design of these steel huts which will be provided with entertainment systems too. The officials said that once they get final clearance from the government, the construction of these huts will start at the higher altitudes first. They expect that the construction work can start from May-June onwards. They said that before finalizing the design, they evaluated the composite Border Out Posts (BoPs) of the Indo-Tibetan Border Police and that of the Army deployed on the higher altitudes to equip them with modern facilities. The BSF move came after the visit of Director General Pankaj Kumar Singh to these locations in November last year and a proposal was sent to the MHA for approval and the MHA has approved it. The solar power panels that will be installed by the New and Renewable Energy Ministry will help in reducing the carbon footprint and pollution generated because of heavy use of diesel and kerosene by the troopers for their cooking and other needs. "Under the prevailing conditions for more than five to seven months, it is indeed very hard to survive and protect the borders as the weather is itself a strong enemy", an officer in the central security forces deployed in the J&K security grid said. Once these steel habitats are set up at these altitudes, the troopers will man the borders in a better way and with more alertness, he added. Apart from the LoC, the BSF is tasked to guard about 2289 km of the India-Pakistan International Border, ranging from Jammu to Punjab, Rajasthan and up to Gujarat in the western part of the country. /IANS

She remains The Taj
Indian Hotels Company (IHCL), India's largest hospitality company, announced the launch of 'She Remains the Taj', a comprehensive framework of women-c

25 injured as bus hits metro pillar in B

At least 25 persons were injured, including four in critical condition, after a Karnataka Road Transport Corporation (KSRTC) bus hit a metro pillar in Bengaluru on Monday. According to sources, the […]

3 killed in shooting amid Philippines polls

Amid ongoing voting to elect a new President of the Philippines, three people were killed and one injured during a shooting incident near a polling centre in Maguindanao province on Monday, the milita […]