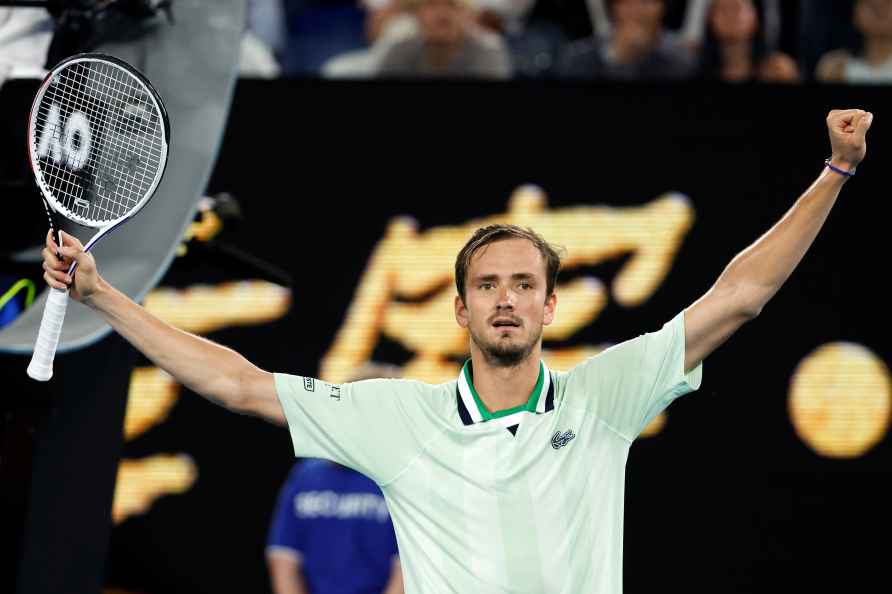 [Melbourne: Daniil Medvedev of Russia celebrates after defeating Stefanos Tsitsipas of Greece in their semifinal match at the Australian Open tennis championships in Melbourne, Australia, Friday, Jan. 28, 2022. /PTI] Melbourne, Jan 28 : Spanish stalwart Rafael Nadal was on the verge of Grand Slam history on Friday, making it to the Australian Open final by defeating Italian Matteo Berrettini 6-3, 6-2, 3-6, 6-3 at Melbourne Park here. The 35-year-old, who captured his 500th hardcourt win of career, is just one match win away from clinching his singles Grand Slam title No. 21, which will make him the greatest major champion in history. Nadal, who won his last and only Australian Open title in 2009, is currently tied with Swiss ace Roger Federer and Serbian world No. 1 Novak Djokovic on 20 Grand Slams each. After his four-set win over the 25-year-old Berrettini, an emotional Nadal reflected on his journey to yet another Grand Slam final after struggling with a foot injury for the second half of the 2021 season. "A month and a half ago I didn't know if I would be able to play tennis," the Spaniard was quoted as saying by atptour.com after the win. "So it doesn't matter, I just wanted to enjoy it and try my best." Nadal had beaten Berrettini in straight sets in the 2019 US Open semifinals, their only previous meeting. The Spaniard would have been happy with something similar on Rod Laver Arena, having admitted he felt "completely destroyed" after his marathon five-set quarterfinal encounter with Canadian Denis Shapovalov, which lasted more than four hours. Meanwhile Berrettini's quarterfinal win over Frenchman Gael Monfils made him the first Italian men's tennis player to reach the Australian Open semifinals, but he is still seeking his maiden win over a top-10 player at a Grand Slam. The world No.5 Nadal raced into a two-set lead early, pinning his opponent with a barrage of topspin forehands. The tactic earned Nadal early breaks in the first two sets with the world No. 7 Berrettini getting few opportunities to gain a foothold in his third major semifinal. The Italian, however, settled into some sort of rhythm in the third set to force a fourth. But Nadal stayed solid to seal victory, avoiding a gruelling five-setter like Shapovalov. It was the 500th hard-court match win for Nadal as he made just 19 unforced errors in the four sets. "I started the match playing great," said Nadal. "The first two sets were two of the best for a long time. I know how good Matteo is, he's a very solid player, very dangerous. In the third I knew at some point he was going to go for his shots. We needed to suffer, we needed to fight, we fought again and that's the only way to be where I am today. It means a lot to me to be in the final again here." As well as becoming the first man to 21 Grand Slam titles, lifting the trophy in Melbourne would make Nadal the second man (after Djokovic) in the Open Era to win all four Grand Slams twice. However, Nadal was keen to treat Sunday's match as he would any other major final. "For me it's all about the Australian Open, more than anything else," said Nadal. "It's just an amazing event. I feel very lucky that I won once (here) in my career, 2009, but I never thought about another chance in 2022, so I'll just try to enjoy the victory today and then after tomorrow I'll prepare my best." Standing between Nadal and a historic 21st Grand Slam will be the winner of the other semifinal between world No.2 Daniil Medvedev and fourth seed Stefanos Tsitsipas. Nadal lead the Russian 3-1 in head-to-head, while he is 7-2 against Greece's Tsitsipas. /IANS