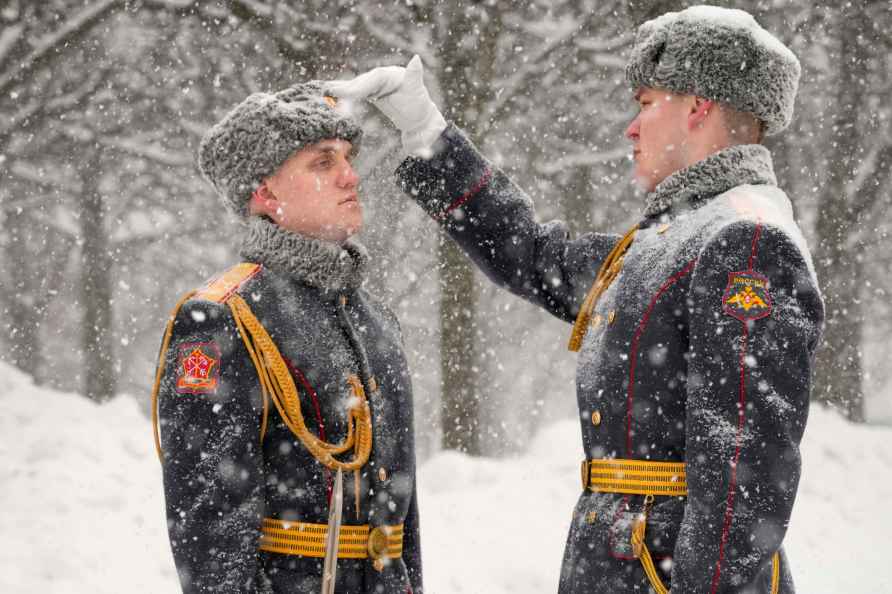 [St. Petersburg: An officer shakes snow off of honour guard soldiers in snowfall at the Piskaryovskoye Cemetery where most of the Leningrad Siege victims were buried during World War II, during a memorial ceremony marking the 78th anniversary of the battle that lifted the Siege of Leningrad, in St.Petersburg, Russia, Thursday, Jan. 27, 2022. The Nazi German and Finnish siege and blockade of Leningrad, now known as St. Petersburg, was broken on Jan. 18, 1943 but finally lifted Jan. 27, 1944. More than 1 million people died mainly from starvation during the 900-day siege. /PTI] Mumbai, Jan 27 : Even as Union Finance minister Nirmala Sitharaman is set to present the annual Budget on February 1, experts have called for regulation of cryptocurrencies and exhorted the government to treat them as capital assets with a "reasonable" tax regime. While the sector has grown exponentially over the last few years in India with buying, selling of the digital currencies and altcoins and establishing cryptocurrency exchanges being legal, the government is yet to bring in a law that regulates the sector. The government was expected to introduce a Bill titled "The Cryptocurrency and Regulation of Official Digital Currency Bill, 2021" to regulate cryptocurrencies in the Winter session of the Parliament but did not do so. It is now expected to be tabled in the Parliament during the Budget session that starts on January 1 and ends on April 8. Pratik Gauri, CEO, and Founder, 5ire said the government has a responsibility to protect people from investments that are sensationalized, and while risk-taking is every investor's right, a measured hand where investment and holding parties responsible go hand-in-hand. "Laissez-faire has never worked in populations where every rupee is hard-earned and we are a nation of hard-earners. Even in terms of governance, the Indian government is looking long and hard at accountability. So, taxation and regulation of investment falls under its purview and I think, thus far the government has done a remarkable job of balancing the need to encourage investment for innovation and the restriction on gaining from wild speculation," he said. He added that all gains from cryptocurrencies are taxed heavily across the globe and that asking to pay a fair share of taxes on the gains in crypto markets is just part of the puzzle. Prime Minister Narendra Modi, while virtually addressing a summit of the World Economic Forum on January 17, had called for a synchronized global action to regulate cryptocurrencies. The Reserve Bank of India has publicly favored a ban on private cryptocurrencies. The crypto assets in India are currently estimated at around Rs 45,000 crore with about 15 million investors. The risk in the widespread adoption of crypto is that poor AML and fraud practices are heavily present in the crypto exchange market. The reasons are multifold: Enhanced Due Diligence (EDD) is not required on crypto exchanges or ATMs at this time. Raj Kapoor, Founder - India Blockchain Alliance and Chief Growth Officer at Chainsense LTD, said an alignment with the FATF framework would also provide crypto for a clearer framework on performing AML compliance, and to prepare to use this to inform your risk assessment and procedures. The Customer Due Diligence (CDD) scanner to detect customer identification, especially for scanning high-risk customers would then be in place as well. Ravi S. Raghavan, Partner, Tax and Private Client Group at Majmudar & Partners says cryptos should be treated as capital assets and reasonable tax regime such as a levy of 18 per cent GST on fee collected by exchanges for enabling buying and selling cryptos; and Investor profits to be either taxed as - short term capital gains (for cryptos held for less than 36 months) at 30 per cent; or long term capital gains tax (for cryptos held for more than 36 months) at 20 per cent that is similar to trading and investment in securities. "Reporting procedures in income tax returns and whether tax withholdings are applicable (beyond prescribed thresholds) should be explained in the form of an FAQ by the Central Board of Direct Taxes in due course to avoid any tax litigation," he said. He added that crypto trading should be considered by the government as speculative transactions and no losses arising from crypto sales be allowed to be carried forward and set off against other business profits or salary income of the concerned taxpayer. Regulating cryptocurrencies by bringing it under the IT Act will make it a part of the investment choices and while most investors do not have a problem with taxation, they seek clarity and consistency of taxes. "Anything that is banned never goes away, it just goes underground and the govt misses out on the tax revenues. Also regulating it would ensure that all loopholes are plugged and people don't feel the need to evade taxes," Kunal Verma director and creative head of Yunometa Pte limited said. /IANS