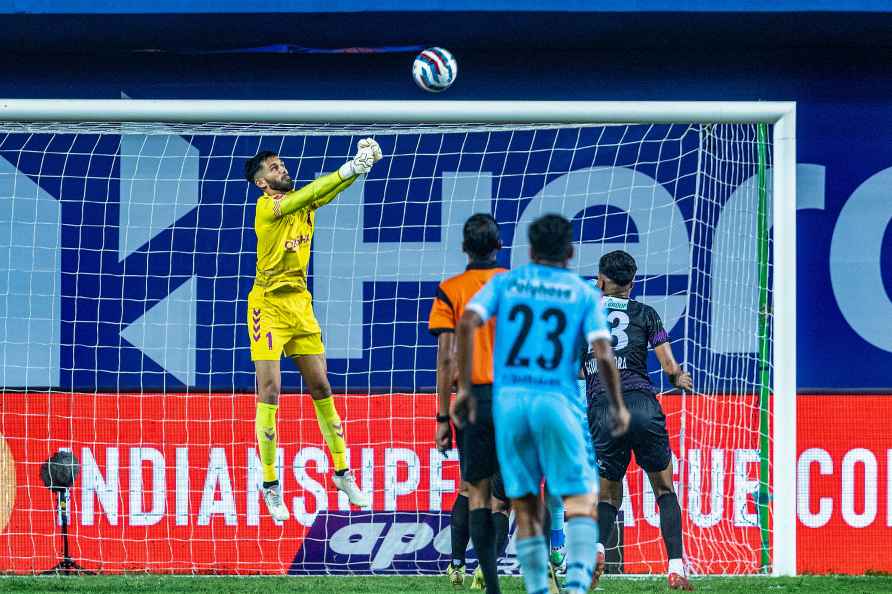 [Goa: Arshdeep Singh goalkeeper of Odisha FC defends a goal during match 73 of season 8 Indian Super League played between Odisha FC and Hyderabad FC, at the Tilak Maidan Stadium in Goa, Thursday, Jan. 27, 2022. ( /PTI] Bambolim (Goa), Jan 27 : Bolstered by the signing of striker Daniel Chima Chukwu, in-form Jamshedpur FC will look to continue their push for a place at the top of the table when they take on FC Goa in the Hero Indian Super League at the Athletic Stadium, here on Friday. Jamshedpur are placed third in the points table with 19 points from 11 games, one adrift of Kerala Blasters and league leaders Hyderabad FC who have played a match more. A win for Jamshedpur would take them closer to pole position if not the top depending on how Hyderabad FC fare against Odisha FC on Thursday. Nonetheless, Coyle's charges will have a game in hand and can pose a real challenge for other teams if they stretch their two-game winning run. Jamshedpur always boasted of a very good attack with Greg Stewart at the heart of it and the likes of Jordan Murray adding steel. The Men of Steel have now roped in Chima who moved to Jamshedpur from SC East Bengal in the January transfer window and the Nigerian striker will only make their attacking lineup more potent. But for Jamshedpur, the challenge would be to get back into game mode after not playing for more than a week as two of their games got postponed. "It will be a difficult match for a number of reasons. Of course, we have been in quarantine for such a long time and that will be a challenge mentally and physically for the lads. But we have managed to train at several stages. It is what is. The other challenge is we are playing a very good side in FC Goa," Coyle said. On Chima, he added: "I am delighted to bring Daniel Chima. I knew about his exploits and I have admired him for many years when he was at Molde. If you look at his performances at SC East Bengal, he did ever so well. He was isolated in front but he carried the fight and sacrificed himself for the sake of the team. These are qualities of a good player." Jamshedpur have done well to score from set-pieces so far, netting 11 times, the joint second highest in the league behind Bengaluru FC (12). Seven of those set-piece goals have been from free-kicks and three of them from corners. Stewart has been involved directly in seven of the 11 set-piece goals scored by the club this season. He also played a part by providing the pre-assist (pass before the final pass) in two other set-piece goals scored by Jamshedpur FC this season. Coming to FC Goa, the Derrick Pereira-coached side are winless in their last three matches and are languishing at ninth place with 14 points from 13 games. The Gaurs have been inconsistent throughout the season and their bane has been leaking goals from set-pieces, an area Jamshedpur are very strong in. "We have lacked finishing in front of the opponent's goal. We dominated games and created chances but could not finish with maximum points. That has hurt us. We need to improve in the attacking third," Pereira said. /IANS

M.S Dhoni confirms he will play IPL next year to bid farewell to CSK fans

Mumbai, May 20 : Mahendra Singh Dhoni on Friday confirmed that he will participate in the Indian Premier League (IPL)'s 2023 season as he wants to bid farewell to the fans in Chennai and also travel t […]

New Delhi, May 20 : The Supreme Court on Friday transferred proceedings of the suit by Hindu parties seeking worshipping rights at Varanasi's Gyanvapi mosque to the district judge, while ordering its […]

Chennai, May 20 : European space agency Arianespace will put into space orbit the Indian satellite GSAT-24 on June 22 using its Ariane 5 rocket, said the space agency. "Hello there! Welcome to G […]