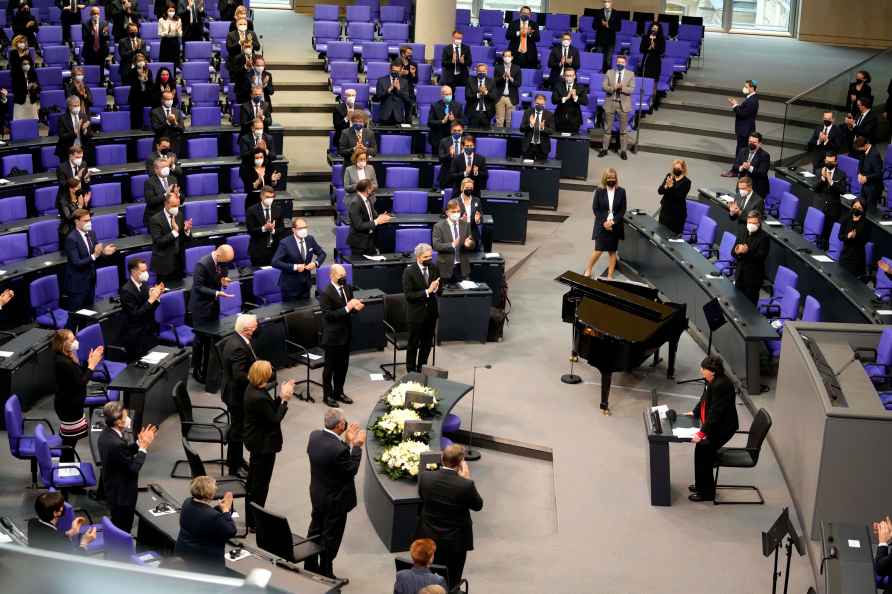 [Berlin: Holocaust survivor Inge Auerbacher, right, receives applause during a special meeting commemorating the victims of the Holocaust on the International Holocaust Remembrance Day in the Bundestag in Berlin, Germany, Thursday, Jan. 27, 2022. The International Holocaust Remembrance Day marking the anniversary of the liberation of the Nazi dear camp Auschwitz on Jan. 27, 1945. /PTI] By Rohit Vaid New Delhi, Jan 27 : National carrier Air India under the Tata brand is set for major revamp in service standards as well as introduction of new passenger friendly amenities. According to sources, on avail are the likely introduction of a flight App developed by TCS for passengers and staff. Besides, implementation of new strategies to improve the airline's OTP (On Time Performance) standards are also on cards. Apart from operational standards, improvements are expected to take place in in-flight services such as more choices of meals. Notably, the aim is to improve the overall passenger experience on at least a few domestic and international flights to begin with. Furthermore, group employees from other entities are expected to be sent to Air India on deputation to oversee the implementation of these plans. Additionally, new board members would be roped in to give strategic direction to the airline. Presently, management control of national carrier Air India is set to be handed over to a subsidiary of Tata Sons. On Thursday, the Chairman of Tata Group N. Chandrasekaran was in national capital to meet key Central government officials for the formal handing over ceremony. Notably, the process would entail constitution of a new Air India Board with Tata nominees. Earlier this week, in a communication to the airlines employees, a senior Air India official wrote: "The disinvestment of Air India is now decided to be on January 27, 2022. "The closing balance sheet as on January 20 has to be provided today, i.e., January 24, so that it can be reviewed by Tatas and any changes can be effected on Wednesday." The communication, which was reviewed by IANS, was sent to the employees by Director of Finance, Vinod Hejmadi. The communication further read: "The next three days will be hectic for our department and I request all of you to give your best in these last three-four days before we get divested. We may have to work till late in the night to complete the task given to us." Last month, the Competition Commission of India approved the acquisition of Air India, Air India Express and Air India SATS Airport Services by Talace, which is a wholly-owned subsidiary of Tata Sons. The acquisition envisaged 100 per cent equity share capital of Air India and Air India Express, and 50 per cent for that of Air India SATS Airport Services by Talace. The airline, along with AIXL, is primarily engaged in the business of providing domestic and international scheduled air passenger transport service, along with air cargo transport service. Air India SATS Airport Services is engaged in the business of providing ground handling services at Delhi, Bengaluru, Hyderabad, Mangaluru and Thiruvananthapuram airports, and cargo handling services at Bengaluru airport. Tata Sons' subsidiary Talace had emerged as the highest bidder for the national carrier under the divestment process. It had quoted an enterprise value of Rs 18,000 crore for 100 per cent equity shareholding of the Centre in Air India along with that of Air India Express and AISATS. On its part, the Centre had stipulated a reserve price of Rs 12,906 crore. (Rohit Vaid can be contacted at rohit.v@ians.in) /IANS

Kolkata, May 20 : The Mamata government, which is already deep into the West Bengal School Service Commission (WBSSC) recruitment irregularities scam, has another controversy brewing up -- silently f […]

San Francisco, May 20 : Elon Musk on Friday refuted a media report that claimed SpaceX paid a female worker $250,000 to hush up sexual misconduct charges against its CEO, saying the report is meant to […]

Bengaluru, May 20 : The Bommai government on Friday ordered an investigation against senior IAS officer Rohini Sindhuri on the allegations levelled against her by the JD(S) leader S.R. Mahesh during h […]

Mumbai, May 20 : Amidst Gujarat Titans ending their league stage campaign in IPL 2022 with an eight-wicket loss to Royal Challengers Bangalore (RCB), wicketkeeper-batter Matthew Wade falling to a cont […]