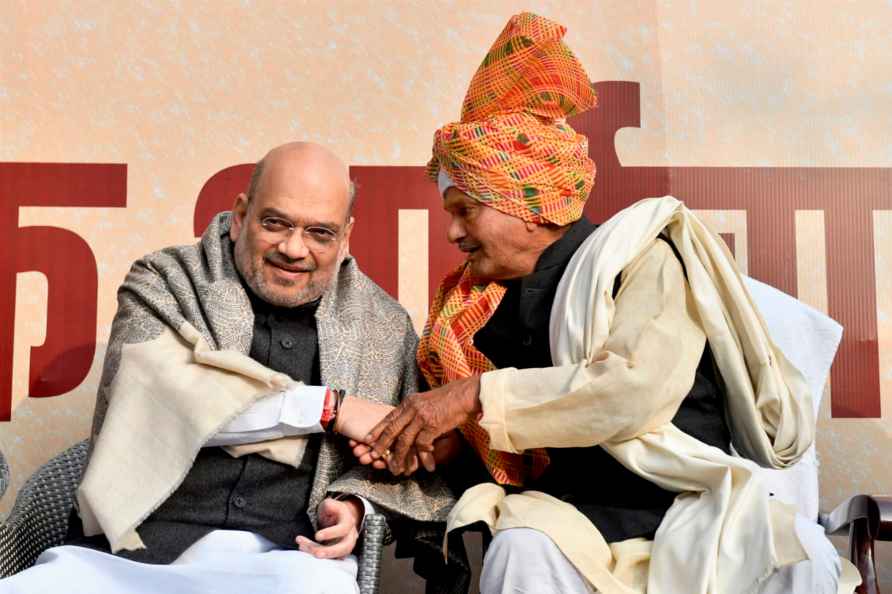 [New Delhi: Union Home Minister Amit Shah with a senior Jat leader during his meeting with Jat leaders from UP, at BJP MP Parvesh Verma's residence in New Delhi, Wednesday, Jan. 26, 2022. ( /PTI] New Delhi, Jan 27 : In a bid to woo voters from the Jat community ahead of the Assembly elections in Uttar Pradesh, Union Home Minister Amit Shah on Wednesday met Jat leaders and said that his relationship with the community goes back a long time. Shah interacted with over 200 leaders from the Jat community in the national capital. He said that both the BJP and the Jat community have similar views on important issues. Describing Samajwadi Party leader Akhilesh Yadav as an outsider, Shah asked the Jat leaders "why do you bring outsiders in a fight within the house?" Taking a note of the soft corner among the Jats for RLD leader Jayant Chaudhary, Shah said, "Jayant has chosen the wrong house this time." Expressing gratitude to the Jat voters for always supporting the BJP, the Home Minister claimed that no one, except Prime Minister Narendra Modi, gave respect to farmer leader Mahendra Singh Tikait. During the meeting, issues related to the situation in western Uttar Pradesh before 2017, Muzaffarnagar riots during the Akhilesh Yadav-led Samajwadi Party government, the grand Ram Temple being built in Ayodhya during the Modi-Yogi government and Jat reservation were also discussed. Talking to the media after the meeting, Union minister and Lok Sabha MP from Muzaffarnagar, Sanjeev Balyan, said that the Jat community has always supported the BJP. Some people also raised the issue of Jat reservation, to which the Home Minister said that it is also in his mind. Balyan also claimed that no one in western Uttar Pradesh wants Akhilesh Yadav to be the next Chief Minister of Uttar Pradesh. /IANS

Jammu, May 20 : A man died after being struck by lightning in Jammu and Kashmir's Poonch district on Friday. Police said a man identified as Irshad Ahmad of Satelan village in Poonch was struck […]

Aaditi Pohankar set for second season of 'She'

Mumbai, May 20 : The second season of Imtiaz Ali's 'She' is all set to return from June 17. Headlining the web series, Aaditi Pohankar gives an insight about the season 2 and how she relates to the ch […]

Washington, May 20 : After two failed attempts since 2019, Boeing's CST-100 Starliner is finally in orbit and is on its way to the International Space Station (ISS) on a mission designed to test the e […]

Amaravati, May 20 : Driver of a legislator of Andhra Pradesh's ruling YSR Congress Party died under suspicious circumstances but the family alleged that he was murdered and demanded the leader's arres […]