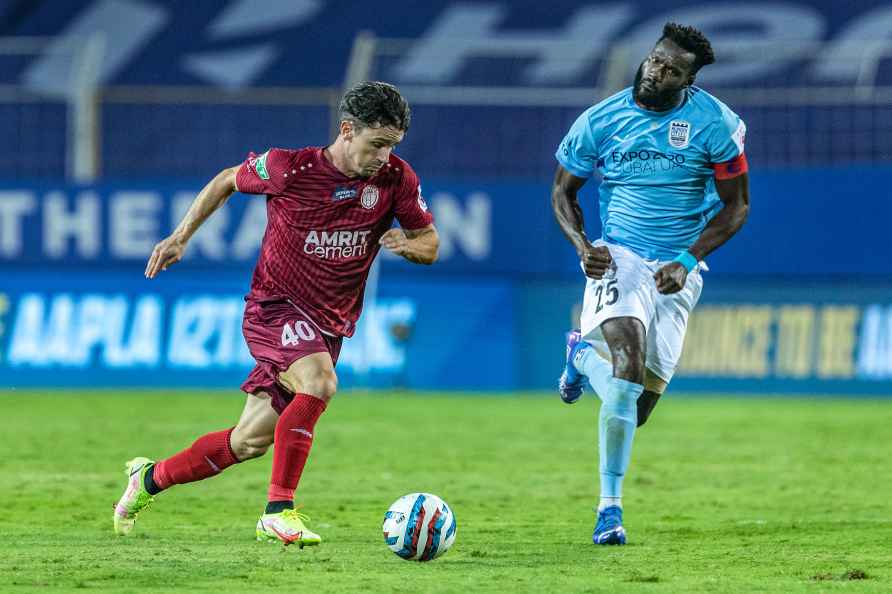 [Goa: Marcelo Leite Pereira of NorthEast United FC and Serigne Mourtada Fall of Mumbai City FC in action during match 71 of season 8 of Indian Super League played between Mumbai City FC and NorthEast United FC, at the Fatorda Stadium in Goa, Tuesday, Jan. 25, 2022. (ISL/ /PTI] Bambolim (Goa), Jan 25 : After a win in their last game, Chennaiyin FC will look to build on the momentum and consolidate their position in the top four when they square off against Bengaluru FC in the Hero Indian Super League game at the Athletic Stadium here on Wednesday. Trailing 0-1 at half-time against NorthEast United FC, Vladimir Koman and Ariel Borysiuk netted once each, just 15 minutes into the second half to complete a turnaround. "First positive from the game against NorthEast United is that we had chances and secondly, we turnaround the game by scoring two goals. That was a good effort, we showed character. It was a very good game for the team and for the players as we were losing but won in the end and that's very important for us," Chennaiyin FC's head coach Bozidar Bandovic told the media during the team's pre-match press conference on Tuesday. Now, the Marina Machans will take on Bengaluru FC in their 13th game. When both the sides met each other earlier this season, the latter managed to secure a 4-2 win. The 52-year-old Montenegrin coach said his side committed some errors in that match but they will look to rectify it during their second face-off. "It (Bengaluru) is one of the best teams with good quality players in their squad. They are very dangerous on the offensive set-pieces. We need to defend set-pieces very well," he further added. Three points against Bengaluru will not only make CFC's position stronger in the play-offs equation but also take them to the top spot on the points table. They are currently positioned at fourth with five wins from 12 games. /IANS

Chennai, May 20 : The state of Tamil Nadu will focus on creating Climate Smart Villages in 2022-23 financial year as part of its Climate Change Mission. The idea of the mission is to understand […]

Kolkata, May 20 : The Tri-Services Eastern Commanders-in-Chief Conference that concluded at Shillong in Meghalaya gave clear indication of a move towards theaterisation of Indian Armed Forces. […]

New Delhi, May 20 : A depression (an atmospheric system that brings extremely heavy rainfall) has formed over Gulf of Martaban and adjoining Myanmar and is likely to move northeastwards to cross Myanm […]

Mumbai, May 20 : Aishwarya Rai Bachchan, who has been a regular at the Cannes Film Festival, turned heads at the ongoing 75th edition of the prestigious film fest as she walked the red carpet. A […]