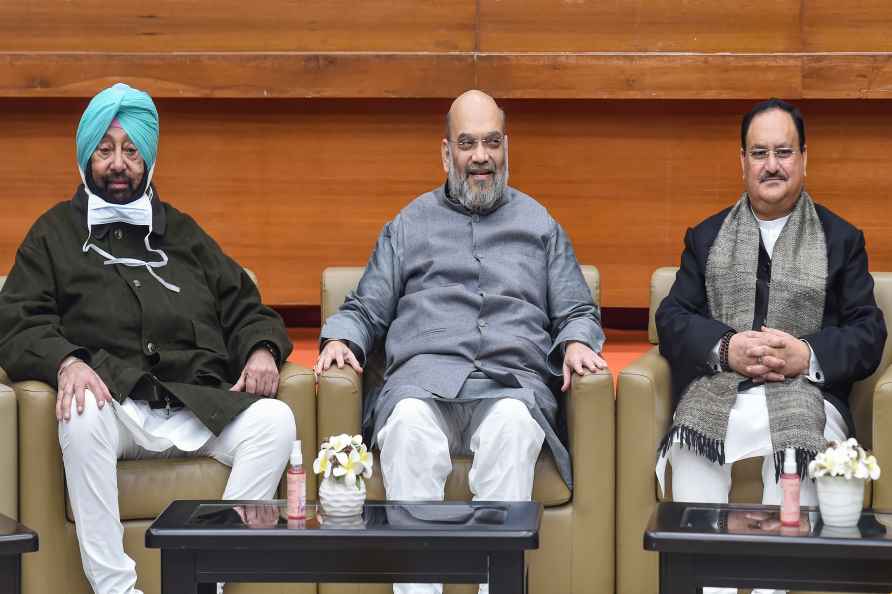 [New Delhi: Union Home Minister Amit Shah, BJP President JP Nadda and Punjab Lok Congress President Captain Amarinder Singh during a meeting ahead of Punjab polls 2022, in New Delhi, Monday, Jan. 24, 2022. ( /PTI] BY VISHAL GULATI Chandigarh, Jan 24 : Unlike the 2017 Assembly polls, the father-son duo of the prominent regional party Shiromani Akali Dal (SAD), elderly Parkash Singh Badal and Sukhbir Badal, were facing tough battle in their respective seats, this time all eyes are on other constituencies in Punjab that will go to the polls on February 20. The otherwise quiet seats have suddenly grabbed everyone's attention with several Aam Aadmi Party (AAP) leaders making a bid even though the tally of its sitting legislators has come down to 13 from 20 who were elected in 2017. Those defected from AAP has accused party chief Arvind Kejriwal of being "dictatorial and arrogant". The hot seats include Amritsar (East) from where Congress state unit chief Navjot Sidhu is in the race to retain it; Patiala (Urban), the 'royal' bastion of Congress rebel Capt Amarinder Singh, whose fledgling Punjab Lok Congress (PLC) is contesting the polls in alliance with the BJP and SAD (Sanyukt); Dhuri from where AAP's chief ministerial face Bhagwant Mann is trying his luck for the first time; and Chamkaur Sahib from where Congress leader and Chief Minister Charanjit Channi is trying to retain it. Five-time Chief Minister Badal, 94, who is battling with Covid-19, is likely to be SAD's nominee from his bastion Lambi, while his son Sukhbir is contesting from his 'safe' seat Jalalabad that he won in 2017 with 18,500 votes by defeating his nearest rival Bhagwant Mann of the AAP. This time AAP has pitted Goldi Kamboj against Sukhbir, while the Congress is yet to announce its candidate and the BJP has fielded Puran Chand. The SAD is yet to announce its nominee from Lambi, while the Congress and AAP has fielded Jagpal Singh Abulkhurana and Gurmeet Singh Khuddian, respectively, as their candidates. In 2017, Congress chief ministerial candidate Capt Amarinder Singh faced a defeat from elderly Badal with a handsome margin of 22,770 votes. However, Capt Amarinder Singh who simultaneously contested from his royal constituency of Patiala (Urban) in 2017 retained it with whopping 72,217 votes. Capt Amarinder's nearest rival Balbir Singh of AAP got just 19,852. SAD candidate and former Chief of Army Staff, General J.J. Singh (retd), who is now with the BJP, lost his security deposit. Interestingly, the Congress is still struggling to announce its candidate against its former Captain, who was unceremoniously removed after a bitter power tussle with Navjot Sidhu last September. From Patiala (Urban), Harpal Juneja of SAD and Ajitpal Singh Kohli, a former Patiala mayor who joined AAP after snapping ties with SAD, have been pitted against the former Captain of the Congress. In 2017, the Congress had won from seven out of eight assembly segments in Patiala district owing to Capt Amarinder's clout. The Congress is likely to announce its candidate for Patiala (Urban) in the second list, which is expected in a day-two. Taking the lead, SAD President Sukhbir Badal in March last announced to contest from Jalalabad. He is a sitting MP from Ferozepur. A former deputy chief minister, Sukhbir had represented Jalalabad thrice in 2009 by-election, 2012, and 2017. In 2019, he quit as MLA after being elected to the Lok Sabha. Congress state chief and former BJP MP Sidhu, who is in the eye of a storm for the ceremonial departure of Capt Amarinder Singh, is trying to retain his Amritsar (East), the seat that came into being after 2012 delimitation. In 2017, the cricketer-turned-politician not only defeated his BJP rival Rajesh Honey with a big margin of over 42,000 votes but also played a role of a game-changer for the party by winning 10 out of the 11 seats in Amritsar district, once the citadel of the SAD-BJP combine. Sidhu, who shares a close rapport with the Gandhis, has been playing a pivotal role in boosting the Congress fortunes by ensuring a repeat of 2017 in the border state that saw two-horse electoral race for nearly seven decades. The hot seat to look out for is Chief Minister Channi's Chamkaur Sahib, a reserved seat that he has won three consecutive times. It is currently in news for illegal sand mining. Channi, who was elevated after Capt Amarinder Singh's resignation on September 18 last year, is the first Scheduled Caste Chief Minister of a state that is home to 32 per cent SC population, the highest in the country. This time AAP has again pitted his namesake, who is a doctor by profession, against Channi, who defeated him by 12,308 votes in 2017. The most interesting contest lies in Dhuri, the state that Congress has held since 2012, from where AAP's Chief Minister's face Bhagwant Mann, a two-time parliamentarian from Sangrur who is considered the party's most popular Punjabi face, is in fray for the first time. Slamming Channi over Enforcement Directorate's raid on his relative's residence, Mann is challenging him to contest election against him from Dhuri. Mann's edge over his archrivals is that this seat falls in his home turf Sangrur. The comedian-turned-politician is posing a tough challenge to Dalvir Khangura, popularly known as Goldy, the incumbent Congress legislator. In the fray for 117 seats in Punjab are three prominent parties -- the ruling Congress, the Aam Aadmi Party and the Sanyukt Samaj Morcha, and two alliances -- the Shiromani Akali Dal-Bahujan Samaj Party (SAD-BSP) and the BJP-Punjab Lok Congress. (Vishal Gulati can be contacted at vishal.g@ians.in) /IANS

Chennai, May 20 : The Tamil Nadu Agriculture department has introduced two mobile tomato processing units to help farmers overcome fluctuating prices of the vegetable in Dharmapuri, the tomato hub of […]