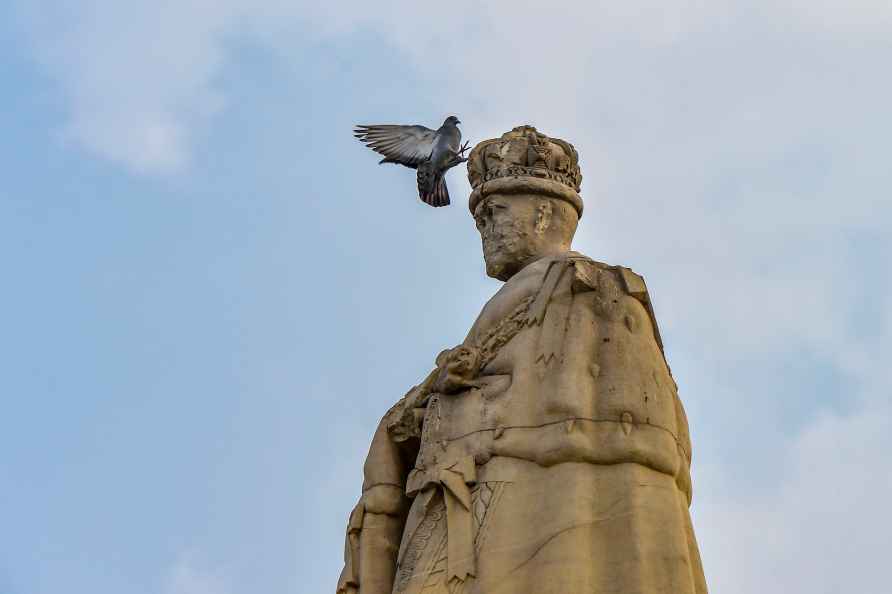 [**EDS: FILE PHOTO, TO GO WITH STORY DES 43** New Delhi: In this file photo dated Dec. 12, 2018, statue of British emperor King George V at Coronation Park in New Delhi. Nearly 50 years after a statue of freedom fighter Subhas Chandra Bose replaced that of King Edward VII in Old Delhi, 'Netaji' is now set to take the hallowed space left behind by his son King George V under an ornamental canopy facing the India Gate.( /PTI] New Delhi, Jan 23 : Before Delhi's Red Fort became the site of India's Independence Day celebrations, the historic fort was popularly remembered as the palace-fortress of Shah Jahan's 17th century Mughal capital Shahjahanabad and as a symbol of anti-colonial resistance during the 1857 rebellion. Later, the monument also gets connected with the military campaign of Subhas Chandra Bose's Indian National Army (INA) in Burma (Myanmar) during the mature phase of India's nationalist movement. The nationwide outrage against the trial of INA officers at the Red Fort further reinforced the imagery of the Mughal palace-fortress as a site of anti-colonial resistance. This is how the former Mughal citadel came to be chosen as the venue for India's Independence Day celebrations. These and many similar revelations came into light in the recently-launched book Delhi, Agra and Fatehpur Sikri: Monuments, Cities and Connected Histories that traces the extraordinary pasts of three imperial cities and their monuments, discussing the role of diverse factors including Indian and Central Asian political and cultural influences, local power dynamics, the role of the Sufi saints, political economy, dynastic and individual ambitions, migrations and invasions, and attempts at repairs and restorations in later times. At a general level, the book authored by Shashank Shekhar Sinha, an independent researcher, and public historian, presents a good example of accessible history writing. It is important to address the progressively increasing gap between academic and public understandings of history, he stresses. Speaking with IANS, Sinha says, "Museums and monuments are one of the most tangible sites for public consumption of history. These are sites where one is face-to-face with buildings and artifacts, face-to-face with tangible repositories of the past. At such sites, people come closest to the idea of experiencing history as opposed to reading or hearing about it. At a specific level, the book presents a multilayered and multi-dimensional account of three imperial cities and their heritage sites. The author advises: "One needs to see heritage sites as wider repositories of historical and cultural legacy. Therefore, the historical context, sites' larger geo-cultural connections, associated symbolism, and their afterlives become important." A comprehensive but lucid introduction delineates the evolution of the three imperial capitals, their settlements, and monuments. It presents an illustrated history of around 500-600 crucial years of the medieval and early modern period in north India, from around the 12th century to the 18th century. This period saw the transition of power from the Rajputs to the Delhi Sultanate to the Afghans and Mughals and finally the colonial British power. The six individual and self-sufficient chapters take the readers on a graphic historical tour of the six most-famous and most-visited UNESCO World Heritage Sites - Qutb Minar complex, Humayun's tomb, Agra Fort, Fatehpur Sikri, Taj Mahal, and Red Fort. They discuss the evolution of monuments, their architectural features, related anecdotes, legends, and folklore surrounding them as well as modern debates and controversies. Sinha's book underscores how it is important to have a creative engagement also with the intangibles-popular history, folklore, and legends. People relate easily to stories and legends surrounding the sites. For instance, all visitors to the Taj want to know about the story of the Black Taj Mahal. "Rather than being summarily dismissive of such stories: he elaborates, "one needs to explain how such myths and legends came into being. So, one story replaces another but, in the process of explaining myths and legends, you get unique opportunities to make people more aware about how the past needs to be constructed or understood." He explains that myth-busting is one of the fascinating features of this book and the author does that through a powerful storytelling technique. Towards the end of the chapter on Qutb Minar, for instance, one comes across the story of how Delhi's first congregational mosque, which symbolised the idea of 'Qubbat al- Islam' ('Dome/Sanctuary of Islam')-- a term used to describe Iltutmish's Delhi which provided shelter to Muslims migrating from Central Asia following the Mongol attacks-ends up becoming known as the Quwwat al-Islam ('Might of Islam') mosque, a term which symbolises subordination, violence, and destruction. Sinha, who is also the Publishing Director, Routledge (South Asia), says that deconstructing such stories help people change the way they look at monument complexes. Besides the big ones, there are intriguing, little-known stories spread throughout the text which provide interesting social histories of diverse architectural features, practices, or icons associated with monuments and resident royalties. These include the evolution of domes and arches, tombs, char-bagh (four-fold garden), jharokha darshan (the practice by which the emperors showed themselves to their subjects every morning from a balcony), Diwan-i Aam ('Hall of Public Audience'), ayina kari (glass work), Mughal encampments, paradise tomb garden, etc. Modern debates related to preservation and conservation also find a place in the book especially in the chapter related to Humayun's tomb, the author points out, adding that the book brings together storytelling and deep and recent scholarship. /IANS

Prayagraj: Commuters use scarves to shield themselves from the heat while riding a two-wheeler on a hot summer afternoon, in Prayagraj, Friday, May 20, 2022. ( /PTI […]

Rupee inches 1 paisa higher to close at 77.55 (provisional) against US dollar.

Kolkata: Bollywood actor Ayushmann Khurrana during a press meet for the promotion of his upcoming film 'Anek', in Kolkata, Friday, May 20, 2022. ( /PTI […]